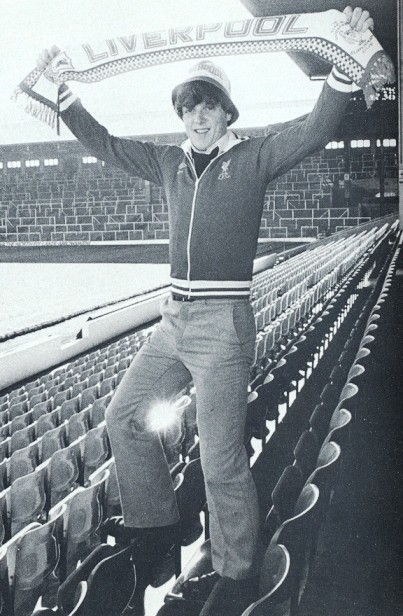 Kenny Dalglish on the above photograph of his fellow Scotsman: "I will never forget Steve Nicol's arrival in October 1981. Until then, the three Scots already at Anfield, Al, Graeme and me had been pretty well able to look after ourselves. We had built up an understanding that the Scots were the master race. We would quote historical facts to the English players to prove it. Some of the most important inventions and discoveries in the world came from from Scots, like television, the telephone, penicillin, the steam engine and tarmac. Their names are part of history - John Logie Baird, Alexander Graham Bell, Alexander Fleming, James Watt. Not to mention those other wonders of the world, golf and whisky.

Per heads of population, the Scots are the most educated race in the world. We did well defending ourselves and flying the flag of Scottish supremacy, until Nicol came. Everything we had built up, he destroyed in 10 minutes because of the photograph that was taken of him when he signed. There he was with a tammy on, a silly Liverpool scarf and sillier grin. Unbelievable. Stevie was a lovely guy, a real one-off. He made a great contribution to the success of Liverpool. We nicknamed him Chico after one of the Marx brothers."

This is LFChistory's salute to one of the best utility players who have graced the red jersey of Liverpool FC.

Bob Paisley bought 19-year-old Steve Nicol on 26th of October 1981 as an eventual replacement for right-back Phil Neal. He cost £300,000 from Ayr United where he had been a part-time player and an out-of-work building labourer. Nicol got his first taste of the first team three weeks after arriving at Liverpool in a friendly versus an Irish International XI alongside other hopefuls such as Kevin Sheedy and Craig Johnston. He made 26 appearances in the Central League side in his first season and featured in four first team league games in the 1982/83 season.

"This lad can play anywhere in the midfield or the back four. He can defend, tackle, he can head the ball, he can take players on and he can score goals and not only would it not surprise me if he eventually finished up in my old position at Liverpool but also I see him as a natural captain, lifting up the trophies for them as well. He is two footed and, talking of his feet, they are size twelve and make their presence felt. His only problem is that he is so honest and nice that he is easily wound up - and that can be fatal at Anfield. Stevie let himself in for a ribbing right from the start when he turned up for an away match at the team hotel with a teddy bear on top of his bag which read something like, 'I am sad Sam, will you cuddle me and love me and make me happy?'" Graeme Souness in 1985 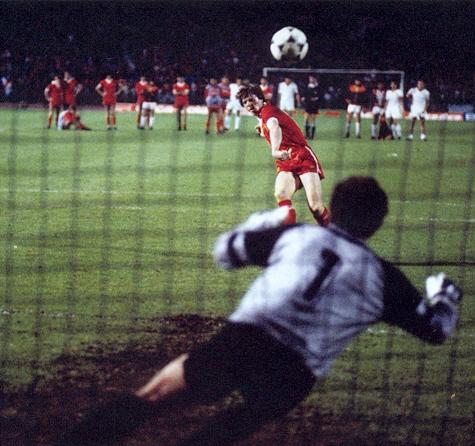 Nicol misses Liverpool's first penalty in the shoot-out against AS Roma. 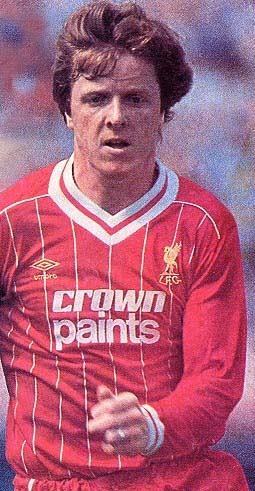 Nicol emerged as quite a player in the glorious 1983/84 season. Phil Neal was not to be moved from the back four, but Nicol slotted in at right midfield. In his first full season he started 32 out of 67 games and came second in PFA's vote for the most promising player of the year behind Luton's Paul Walsh. His highlight could have so easily been his lowest point as after coming on as a sub for Craig Johnston he played 47 minutes in the European Cup final in Rome and blazed over Liverpool's first penalty in the shoot-out. Thankfully Nicol ended on the winning side, but he had proved his courage in Liverpool's hour of need.

"Shanks always preached that we had eleven captains. He wanted to see players think things out and rectify things if they were going wrong... I remember Steve Nicol getting a hat-trick once at Newcastle. Nobody told him where he had to go and what to do, he just worked it out himself. He got the match ball and I told him it was probably the only one he'd ever get, but nobody told him off for joining in the attack." - (Ronnie Moran in an interview on ronniemoran.com).

Nicol is one of the most versatile players football has ever seen. As well as playing on the right side at the back or further up the wing, the genuinely two-footed Scot did an excellent job on the left and also had a successful spell in the heart of the defence when Alan Hansen was hospitalised for the majority of the 1988/89 season.

"One of my Liverpool colleagues who epitomized the best elements of English football was right-back Steve Nicol, who was with the club from 1981 to 1994. When I was switched from the left side to the right of Liverpool back four towards the end of my career, when my knee problems had taken their toll on my running, it made me feel I could light a cigar and read a newspaper to have Steve on the outside. His fitness was astonishing. Dietitians would be horrified at the amount he ate. He could eat for Britain. He and I and our families once were on a Norwegian cruise together and he probably consumed more than the rest of us put together. It was not unusual for him to go through six or eight packs of crisps in one go. But he never carried any excess weight, hardly missed a tackle and gave the impression of being able to bomb up and down that right touchline of ever. Suffice it to say that after our first match together on the right, I thought, 'Where have you been all my life?'" - Alan Hansen.

"Chico" was a great defender, but also a superb attacking player. He was quite adept at taking on defenders and an accurate crosser of the ball. He scored some brilliant goals and even lead the goalscoring charts at the beginning of the 1987/88 season, after scoring 6 goals in his first 6 league games, including a superb hat-trick against Newcastle which Bob Paisley described as a "masterpiece". Nicol's importance was officially recognised with a FWA Player of the Year award in 1988/89 after filling six different positions that season.

"I’ve never seen a fella smoke and drink so much and still be so fit. He was a freak of nature. He loved a cig, much to the annoyance of Kenny, and would spark a sneaky one up on the bus on the way back from matches." - Gary Gillespie

Nicol was a regular in Liverpool's first team for 11 years and retired after 468 matches and 46 goals as a certified club legend.