Saul was a full-back who had impressed in two seasons at Plymouth Argyle featuring in 94 matches and scoring four goals from 1904-1906. Argyle fans were sorry to see him go to Liverpool prior to the 1906/07 season in which he made 24 consecutive first division appearances and 33 in all as a right-back taking over from Alf West who was injured four games into the campaign. Saul was inconsistent in his debut season at Liverpool but had been making progress in his second season as was commented upon in the club programme on 30 September 1907: "The most improved back in England is Percy Saul. Last season he showed flashes of great brilliance, but these were darkened by a number of unaccountable mistakes. He was most erratic. But this season, while the brilliancy remains, consistency has also been added, and Saul's performances have attracted attention all round. Perhaps he is taking more care in training. He is remarkably speedy, and he kicks with remarkable precision while in the most extraordinary positions."

Alf West had returned to the side in the 1907/08 season but Saul was preferred to Billy Dunlop on the left and he made further 27 appearances and scored his only League goal for the club in a home match against Sheffield United at the end of December 1907. Saul was picked only 16 times for League and Cup fixtures in 1908/09 in what turned out to be his last season at Anfield. 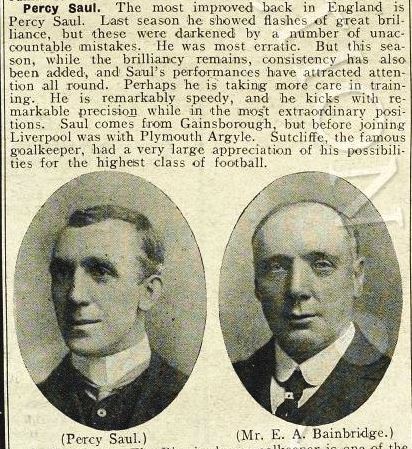