Liverpool showed their intent by paying a club record fee of £75 for double League champion inside-right Jimmy Ross from Preston's "Invincibles" in 1894. It was an ambitious signing as Ross was a legend at Preston, scoring 18 goals in the club's undefeated season. He was the League's top-scorer in 1889/90 with 24 goals and scored seven goals in Preston's record 26-0 win over Hyde in the 1887/88 season. The transfer didn’t go through without a hitch, as the Liverpool Review reported on 25 August 1894: "Since the Liverpool club signed him on from Preston, Jimmy has exhibited a reluctance to carry out his bargain with his new club. A note appeared in the papers the other day that Jimmy was determined not to play for Liverpool on any account, chiefly because his brother, the late famous Nick Ross, had on his deathbed expressed a desire that Jimmy should not desert the North End, for whom they had both been playing for the last ten years. This being the case, the relations of Jimmy Ross towards the Liverpool club are at the time of writing somewhat strained and awkward, but as he has duly ‘signed on’, and as the Liverpool club have paid some £75 down for his transfer, the probability is that if the Anfield people wish to press their claim Jimmy will be found duly in his place on the fine Anfield sward when Aston Villa opens the season for the Liverpudlians in two weeks’ time."

Ross took over as Liverpool captain from Andrew Hannah midway through his debut season and ran the show, pretty much, at Anfield in his first two years at the club. He had incredible technique, precise passes and was good with both feet. He was a joker on the pitch, an entertainer in every sense of the word. Twelve goals from 27 league matches was not a bad return during a season when the club managed only 51 from 30 games and were relegated straight back to the Second Division. Ross, who wore the captain's armband, played as a centre-forward as well on the right wing and banged in 23 goals from 25 league games when the club made an immediate return to the top division. But in his third campaign, even though Liverpool did finally establish themselves as a first division club by finishing in a very creditable fifth place, Ross only found the net three times from 21 matches.

Late in the 1896/97 season Ross joined Burnley along with teammate Malcolm McVean and their first match was at Anfield only a week later. Burnley beat Liverpool 2-1 but didn't do enough to prevent their relegation. Burnley won the Second Division the following season with Ross scoring an impressive 23 goals in 27 league matches. Ross only played half a season in First Division before joining Manchester City who were on their way to the second division title. Ross scored 21 goals in 67 games for City, but ill-health forced him to retire from the game in the 1901/02 season. Ross contracted an acute skin disease, Erysipelas, succumbed to raging fever and passed away only 36 years of age on 12 June 1902. His coffin was covered with wreaths and floral tributes, one from Preston North End bearing the following appropriate inscription: “In memory of one of the old Invincibles".

Go back to October 1894 when Everton and Liverpool met at Goodison Park. A neutral observer witnessed the match and paints a vivid scene of a Merseyside derby day 118 years ago!

The “little demon” is dead

Article from the London Football Evening News on 6 March 1897 on Ross's exclusion from the first team.

After winning the Lancashire league Liverpool's climb up the league ladder started in 2nd division. A real fairytale season was ahead and the club's biggest game to date against the most famous club in England in the FA Cup.

The transfer of Jimmy Ross didn't go through without a hitch as the Liverpool Review reported on 25 August 1894.

Jimmy Ross - Memories of the past 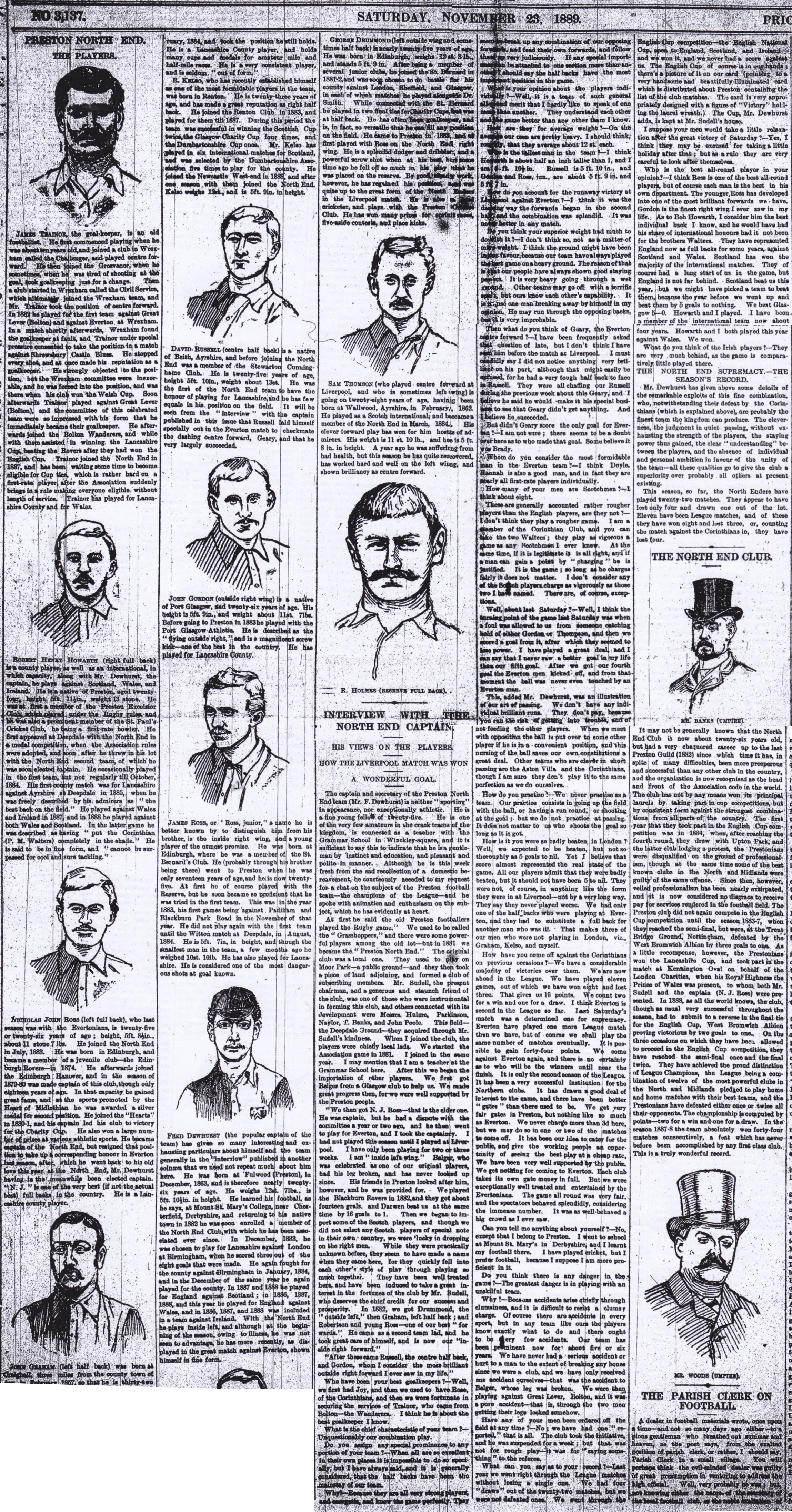