A hard-working player who gave his all for Liverpool both up front and at the back. Robinson was a goalscoring sensation in the Sunderland school's tournaments, scoring one season 132 out of his school's 156 goals. After eighteen months with Sunderland Royal Rovers in the Wearside league Robinson joined Sunderland in the midst of the 1901/1902 season in which he contributed one goal in five appearances as Sunderland won the League title. In February 1904 he joined Liverpool shortly after a fellow Sunderland striker, Joe Hewitt, had gone to Anfield. Robinson made nine first division appearances, scoring five times before the end of that debut season but those goals were not enough to stop the club's slide into the Second Division. In his first full season at Anfield he was top-scorer with 24 from 32 League matches as Liverpool won the Second Division by two points from Bolton Wanderers. His greatest feat that season was scoring all four goals in a 4-0 home win against Leicester Fosse on 1 October 1904.

Robinson and his colleagues coped astonishingly well back in the top division, so much so that they ended the season as champions four points ahead of Preston North End. Robinson only missed four fixtures and added another ten goals to his rapidly-growing total. During the latter stages of his Liverpool career, Robinson moved into the half-back line and so his goals-per-game average inevitably suffered but he prolonged his Anfield stay by three seasons. Prior to the 1909/10 season when Robinson was due to be moved to half-back, being the heaviest man on the team, extreme measures were used to get his surplus fat off. He was made to sit in a small “hot room” in furnace-like conditions and sprinted, ball-punched, skipped, and lifted dumbbells. In a 1912 profile it was said that he "believes that energy is invaluable in football as in the daily routine of life, and he relies mainly on his bustling tactics, determination, and unlimited energy, combined with a degree of skill for his success at half-back. Is easily distinguished when on the field by reason of his fair hair and well-built figure, and as a forward he has demonstrated his versatility."

Bobby struggled with injury in the 1912/13 season but recovered as the Liverpool Echo reported at end of January 1913: "I am delighted to inform this legion of friends that “Bobby” Robinson, the Liverpool half back, has not finished with football, and under the careful attention of Dr. Ferguson, a director of the club, he is making such progress towards health and strength that there is every hope and chance of his playing football; in fact he in training again." Robinson did never make another appearance for Liverpool's first team and joined Tranmere in the Lancashire Combination prior to the 1913/14 season.

Often falsely referred to as Robbie in modern sources. He was always called Bobby.

Often falsely referred to as Robbie in modern sources. He was always called Bobby. 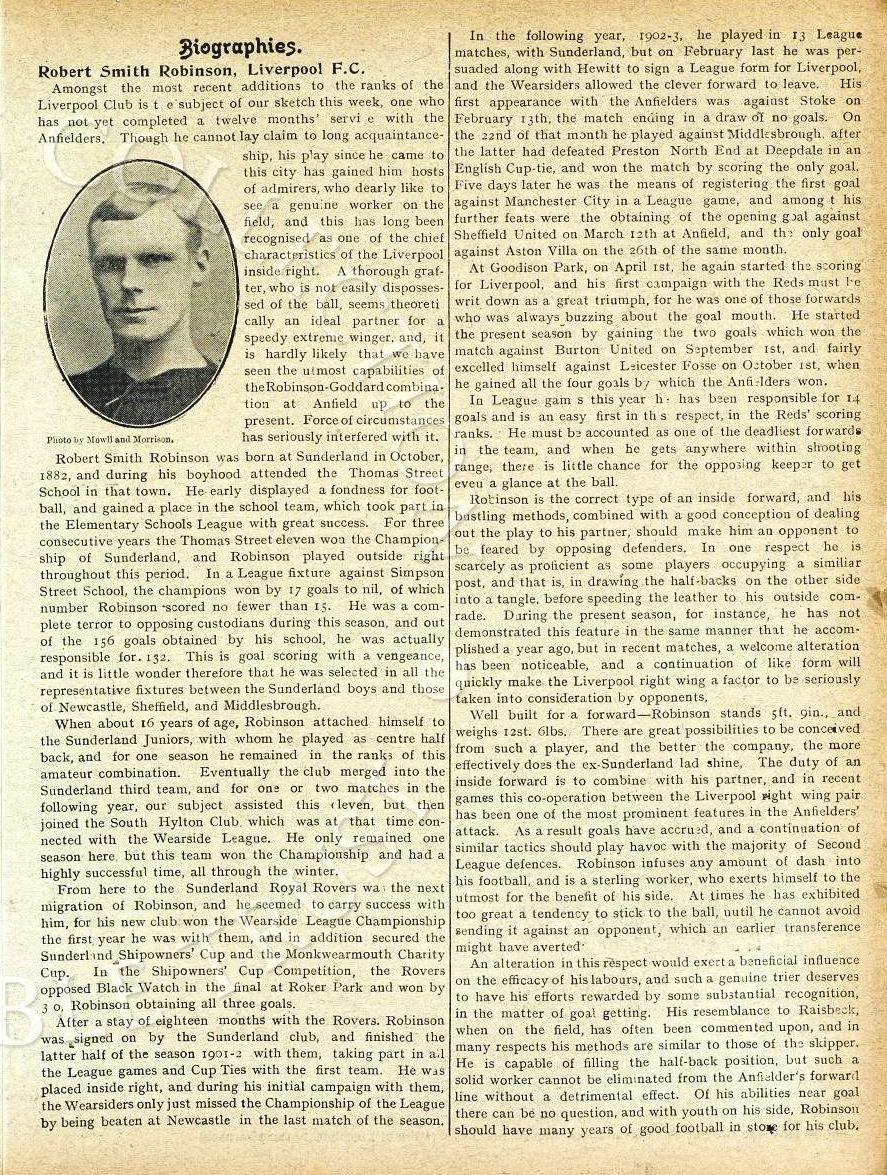