David Pratt joined Bradford City in November 1921 from Celtic where he had been an outside-left. Pratt established himself as centre-half at Bradford City who were unfortunately relegated to the Second Division in his debut season. Reports said he was "the mainstay of the defence" and "a coming international." Pratt signed for Liverpool in January 1923 and became immediately known for his mighty throw-ins as the Liverpool Echo revealed in the report on Pratt's Liverpool debut on 17 February 1923: "Pratt was amazing the crowd with some of his throw-ins, I swear some reached the middle of the field. If he could develop this “Long Throw” it could be a useful asset if further up the field and would almost be like a corner." Pratt played as left-back when Liverpool guaranteed the League title with two games to go on 21 April 1923 against Herbert Chapman's Huddersfield Town. The following season he was an understudy to right-half Tom Bromilow and added 15 games to his total. The highest number of league games Pratt played in during a single season was 26 in the 1924/25 season when he profited from Bromilow's absence due to injury and Walter Wadsworth's lengthy ban for a dismissal. After five seasons at Anfield Pratt left for first division Bury at the end of November 1927. If Pratt wouldn't suceed there, he could always depend on his cigar business!

Pratt was player-manager of Southern league's Yeovil and Petters United when he revealed his musings on "Sport in relation to everyday life". "Sport as a factor in development we welcome as an ally, but sport as a dominant passion is an enemy of the soul,” concluded Pratt, in what was described as a striking address to the Yeovil Rotary Club. He did admit that there was no question about the value of recreation that was encouraged by most churches, but the difficulty was with professional sports which thousands of people followed. In industrial cities like Sheffield, Newcastle, and Sunderland it had been demonstrated beyond all question that football matches had helped to empty public-houses, and many women bought season tickets for their husbands. Watching the game had a psychological and moral as well as social value, "but when all cultural interests are crowded out by it, there is real danger to the life of the nation.”

In 1933 Pratt moved from Yeovil, where he had stayed for four years, to manage Clapton Orient in Third Division South. When a move to Notts County looked on the cards in 1935, Orient supporters got up a petition to make him stay. Despite their protestations Pratt moved to County where he never took charge of a competitive game as he took over at Scottish first division Hearts the very same summer! Pratt had to juggle two jobs as manager and trainer at Tynecastle when a players' strike in October 1936 forced his assistant, Jimmy Kerr, to resign. Pratt felt the situation was intolerable and resigned four months later. When World War II broke out he served in the RAF. He accepted to become manager of Port Vale in December 1944, but was unable to gain release from the Air Force. 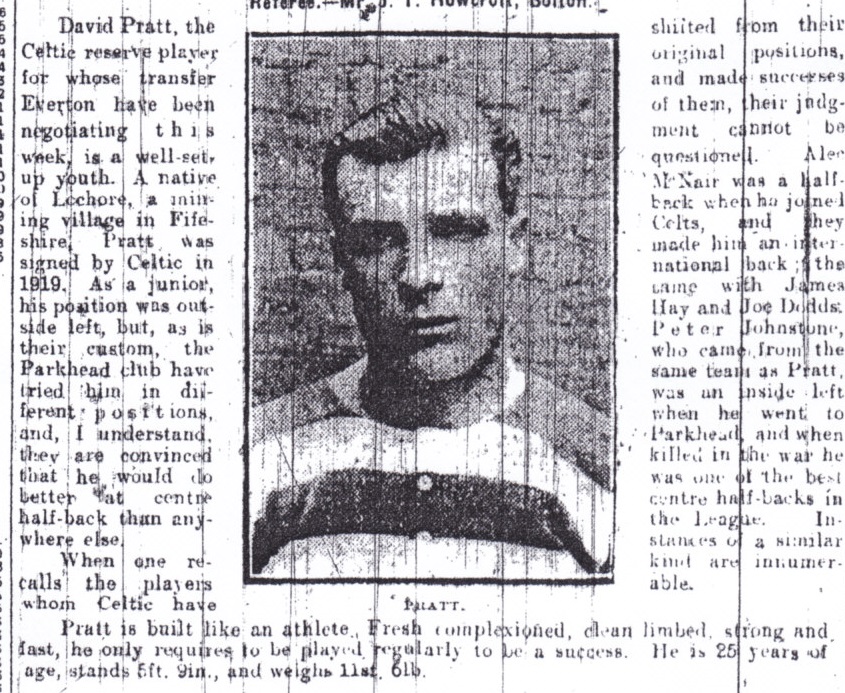