Howe was recommended to Liverpool by former Red Tommy Johnson who saw him feature for Hyde United in the Cheshire league. Forward Howe made his debut on 6 April 1935 against Derby and figured in six of the final seven first division fixtures of that season, scoring in successive matches against Aston Villa, Stoke City and Chelsea. He was the club’s leading scorer for the next two seasons with 17 goals from 36 appearances in 1935/36 and 16 from 41 matches in 1936/37. He only figured 11 times in 1937/38 and failed to add to his goal tally which turned out to be his final season at Liverpool. Howe was a prolific scorer for his teams after he left Liverpool through all three levels of the Football League; 15 goals in 29 League games for first division Grimsby Town, five in six games for second division Manchester City and 20 goals in 30 games as a 34-year-old for third division Oldham.

Howe’s biggest moment in the Liverpool shirt came when he scored four goals in the club’s biggest win over their eternal rivals, Everton, on 7 September 1935. Three of his goals were headers, the last of which came in the eighty-ninth minute at an “express speed”. Only three Liverpool players before him had managed a hat-trick against Everton: Harry Chambers in 1922, Dick Forshaw in 1925 and Harold Barton in 1933. Seventy-seven years passed before Steven Gerrard joined this exclusive group of men in 2012. Still nobody has equalled Howe’s quadruple against Liverpool’s eternal rivals at Anfield so for that alone he deserves to go down in Merseyside folklore. 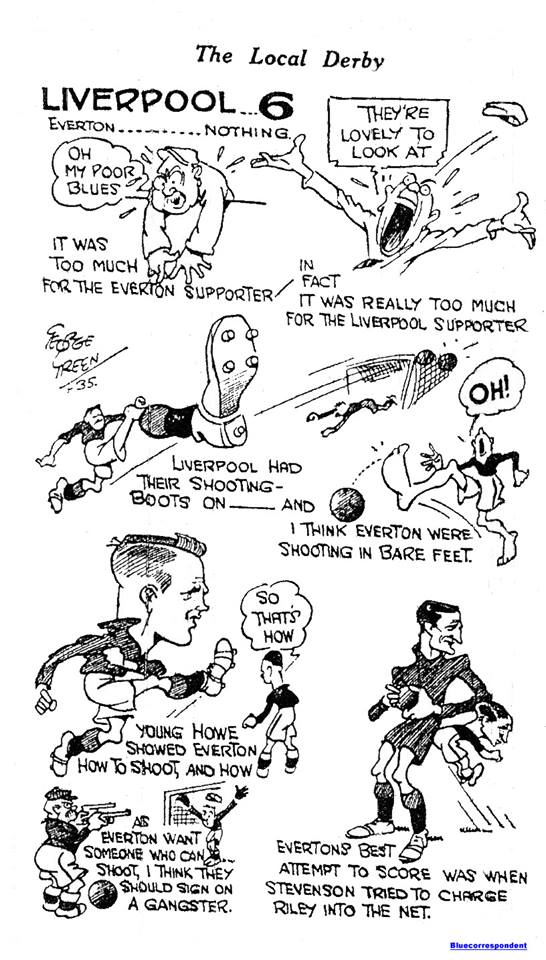