A strong defender with a slightly unfortunate surname that would have ensured him merciless stick on and off the field nowadays. Cockburn joined from second division Stockport County prior to the 1924/25 season. He made his debut covering for centre-half Walter Wadsworth in successive matches against Bury and Nottingham Forest early in the season, but It was as replacement for right-half Jock McNab that he made the majority of his 19 appearances that year. Cockburn missed only six of the 42 first division fixtures during the 1925/26 season featuring beside half-backs McNab and Tom Bromilow at the heart of Liverpool's defence. He figured in the first eight matches of 1926/27, but following three defeats in a row he and half-back Albert Shears made way for Tom Reid and David Pratt, but that failed to fix the leaky defence. Cockburn's appearance against West Ham United at Anfield seven days before Christmas in 1926 was his last for the club. After spending the 1927/28 season in the reserves Cockburn joined Queens Park Rangers in Third Division South. The Derby Day Telegraph praised his qualities in 1926: "He’s a tall man, now in his prime, great in breaking up, and wonderfully accurate with his long swinging passes to the wings."

"Liverpool did a good stroke of business when they secured William Cockburn, the former Stockport County centre half, who appears to have made the position his own in the Anfield ranks. Since getting into the League side he has improved considerably in his general play, and is quite a favourite at Anfield. Big and strong, he reminds one in many respects of Alex Raisbeck." 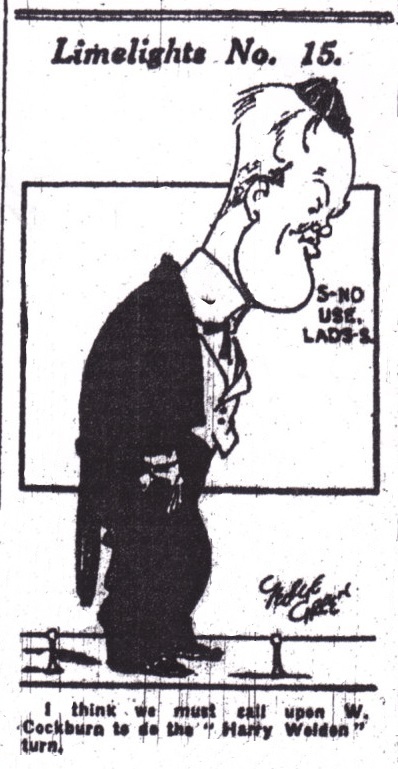