"Bradley possesses a splendid idea of the requirements of a successful , and the forwards in front of him cannot complain of the accurate attention. He believes in keeping the ball on the turf, and his clever tackling is only equalled by the skilful manner in which he places to his front rank." (Club programme from 2 February 1908). Bradley started out with a local team, Goldenhill Wanderers, in the coal mining village of Goldenhill where he was born and raised. After only one season he signed for Stoke where he made 199 appearances in the First Division from 1898 to 1905. At the end of the 1904/05 season, he was supposed to join Plymouth Argyle but the Football Association wouldn't sanction the deal. He joined Liverpool a few months later despite having a run-in with one of their players in a first division match on 17 October 1903. Bradley got into a fight with Fred Buck and they were both sent off. Buck was banned for six weeks but Bradley only 14 days.

Bradley made his first appearance for Liverpool in a home first division fixture with Birmingham City on 23 September 1905 and played in 32 league matches in his debut season, collecting a championship medal in the process.  He would miss only 18 League matches over the next four seasons and it wasn't until the 1910/11 season that his position at left-half was threatened. On one unusual occasion, Bradley played in Liverpool's goal on 25 December 1909. He donned the goalkeeper's jersey in Sam Hardy's absence and the big England international must have been proud to see his unlikely understudy keep a clean sheet in a 3-0 win over Bolton Wanderers. In 1913 Bradley rejoined Stoke after the club had resigned from the Football League. 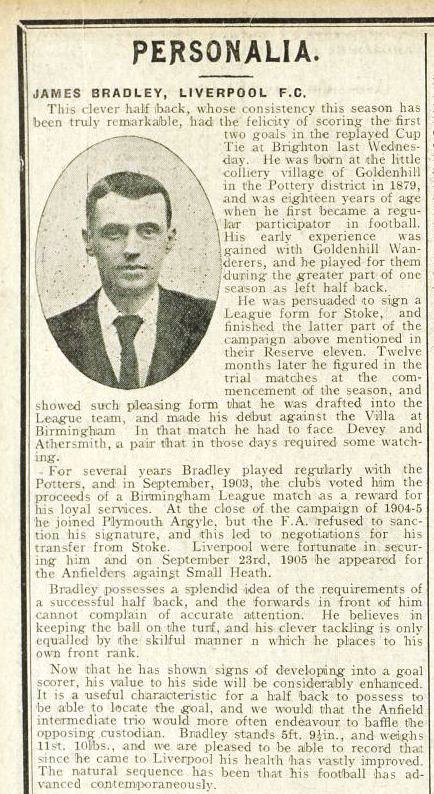