Wright made quite an impression in his first season at third division Oxford United and was sold to first division Southampton in March 1982. The 19-year-old quickly established himself in the Saints' team under Lawrie McMenemy who in 1984 guided the club to second place in the First Division, their highest-ever finish. Southampton finished three points behind Liverpool. Newly-promoted Derby County had big plans under owner Robert Maxwell and shattered their transfer record to buy Wright from the Saints for £760,000 in August 1987 and brought over his veteran teammate, Peter Shilton. After two successive promotions Derby finished fifteenth in the First Division in 1988 but following the purchase of Dean Saunders in the autumn to provide the goals Derby were fifth at the end of the 1988/89 season. The club's decline was rapid, however, and the club was relegated back to the Second Division in 1991. Wright had been one of England's best performers during the World Cup in 1990 and his star was shining bright. Souness made the Derby captain the most expensive defender in Britain to become Liverpool's defensive lynchpin. Wright did not have happy memories of Liverpool as he suffered a horrific leg break after a clash with Bruce Grobbelaar in the 1986 FA Cup semi-final which the Reds won 2-0.

ht was a master of bringing the ball out of defence and dominant in the air, a smooth playing style reminiscent of Alan Hansen. Souness named Wright captain in the absence of Ronnie Whelan, but his Liverpool career did not get off to the best of starts as he got injured only two games into the season and was sidelined for three months. The season ended on a happy note when Wright lifted the FA Cup after a win over Sunderland. Following a run of bad results in September 1993, Wright lost his place to Torben Piechnik along with the captaincy. He returned in December and stayed in the starting line-up for the majority of the games until the end of the campaign. The 1993/94 season was the last of Souness' reign and almost became Wright's last campaign as well. He had been absent through injury since March 1994 and in pre-season 1994/95, Roy Evans criticised his poor form and attitude publicly. The double purchase of centre-halves Phil Babb and John Scales hardly increased Wright's chances. Wright returned in March 1995 having made five appearances for the reserves since the end of January. He had been absent from the first team for a whole year and had clearly learnt his lesson as he started at the beginning of the 1995/96 season, rejuvenated. His performances were of such high calibre that he made an unexpected return to the England national team at the age of 33, but an injury ruled him out of Euro '96 at the last minute. "When Ruddock, Babb and Scales came in people saw them as replacements for me," Wright said on his renaissance. "Then, all of a sudden, I got back in. I went to be voted the club's player of the year (1996/97) and that was brilliant for me." Unfortunately, injuries caught up with Wright in 1998 and he had to retire from the game, after enjoying the best two-year spell of his career.

Wright's managerial career started at Conference club Southport in December 1999. He saved them from relegation and in his first full season, Southport finished fourth. In June 2001 he was appointed manager of his first professional club as a player, Oxford United, who had been relegated to Third Division. But only a few months after his arrival he was sacked following an allegation that he had racially abused referee Joe Ross after he had dismissed two of his players from the field of play. His next appointment was at another Conference club, Chester City. Wright steered them away from a possible relegation to the Northern Premier League and turned the club's fortunes around so much that they returned to the Football League as Conference champions in 2004. But just two days before Chester were due to play their first match in the Football League for four years, Wright resigned. A month later he became Peterborough's manager but in early 2006 he was suspended then subsequently sacked for 'gross misconduct' reasons after he failed to turn up to a hearing at London Road. Wright rejoined Chester shortly after leaving Peterborough and his reward for helping the club avoid a second relegation to the Conference in 2006 was a two-year contract. However, results were so poor in the first of those two seasons that the Chester chairman dismissed Wright with one league match remaining.

Amazingly, in November 2008, Wright was given a third opportunity to manage Chester City. At the end of a disastrous season that ended in relegation, the initial signs were that the manager would stay to help the club regain its Football League status. However, seven weeks after relegation was confirmed, the manager resigned, declaring that "the difficulties faced by the club made it impossible for me to create the type of team I would wish to take forward." Those difficulties included the prospect of starting the 2009/10 season with a ten-point penalty after going into administration, as well as releasing a dozen players since the start of the calendar year, amongst whom was the club's top-scorer. In August 2012 Wright was named manager of Malta’s oldest club, Floriana after the club came under the control of Merseyside businessman, Stephen Vaughan. Wright left the club in October 2012.

8 goals <-> 9 goals. The goal on 13.11.1996 in the league cup against Charlton is by some sources classified as an own goal. But Liverpool and this database claim it as his goal.

8 goals <-> 9 goals. The goal on 13.11.1996 in the league cup against Charlton is by some sources classified as an own goal. But Liverpool and this database claim it as his goal.

Rush: the best there is

"When Ruddock, Babb and Scales came in people saw them as replacements for me. Then, all of a sudden, I got back in. I went to be voted the club's player of the year (1996/97) and that was brilliant for me."

Mark Wright on his renaissance at Liverpool 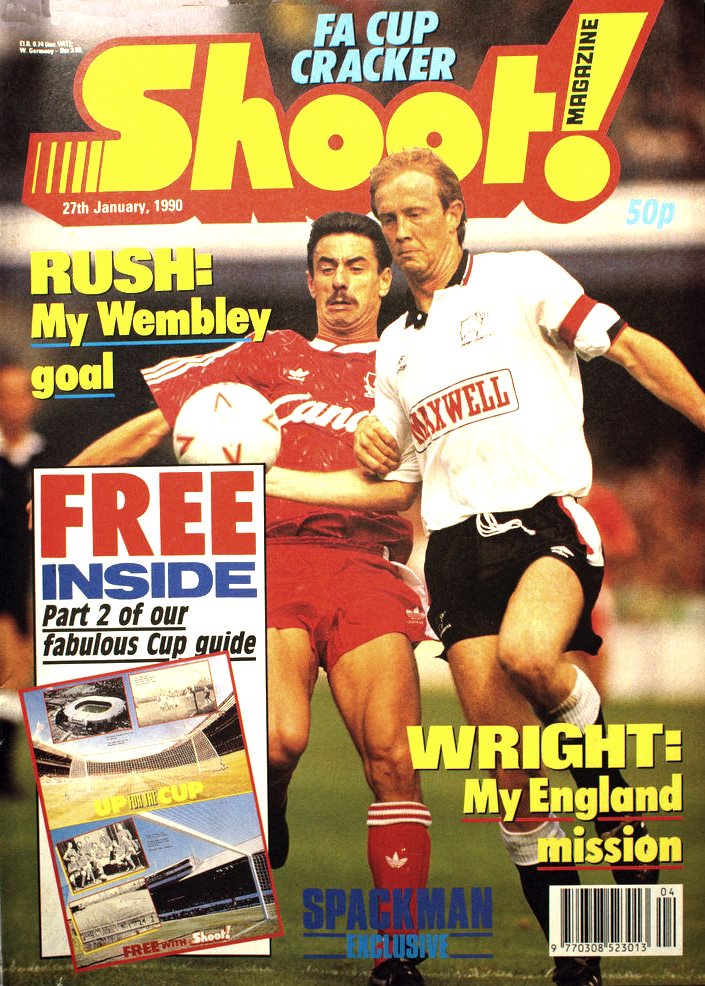 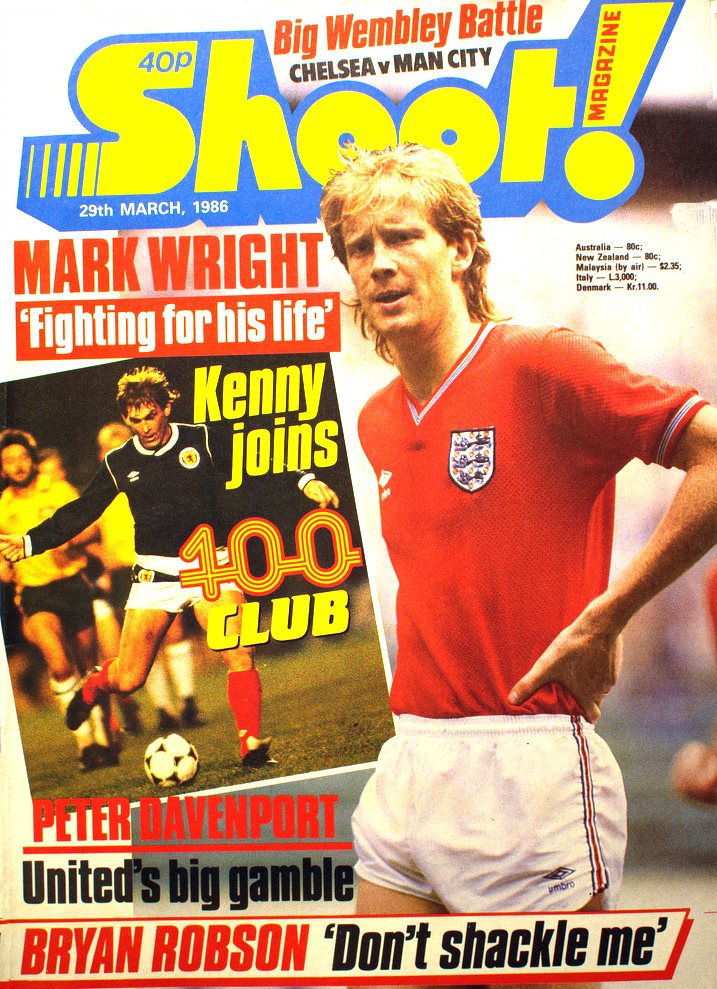 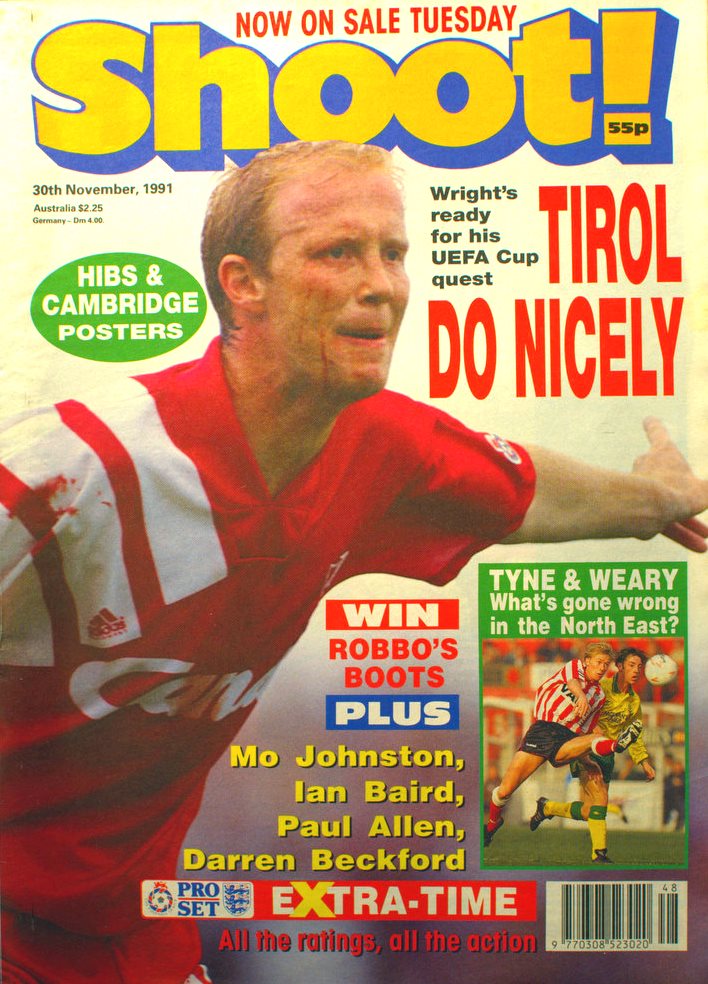 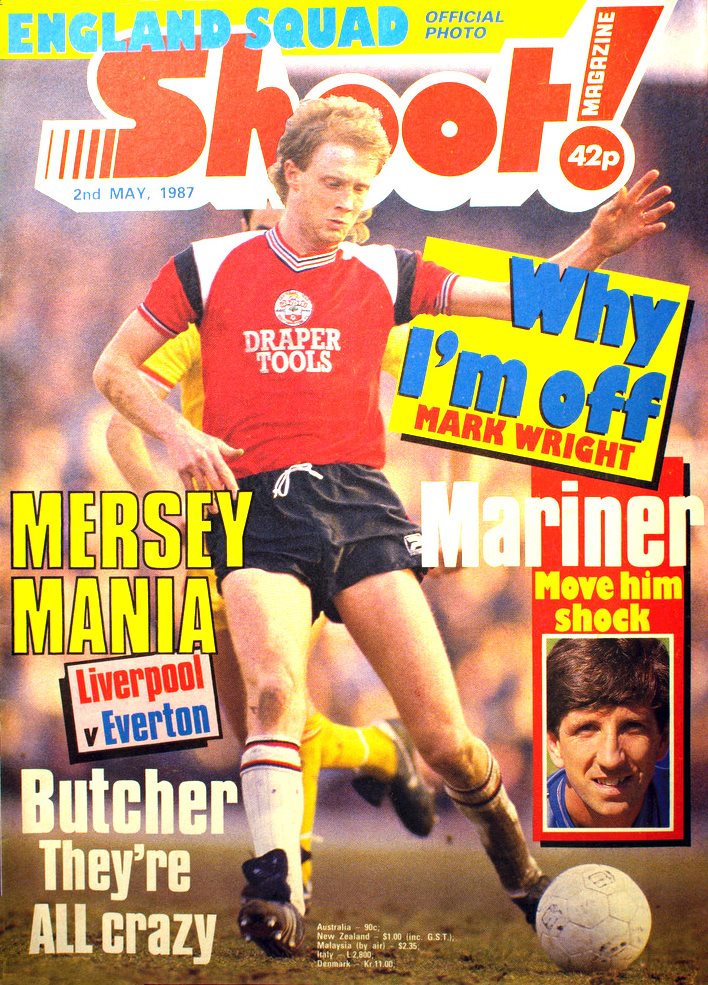 Southampton's Mark Wright on the cover of Shoot! 2 May 1987 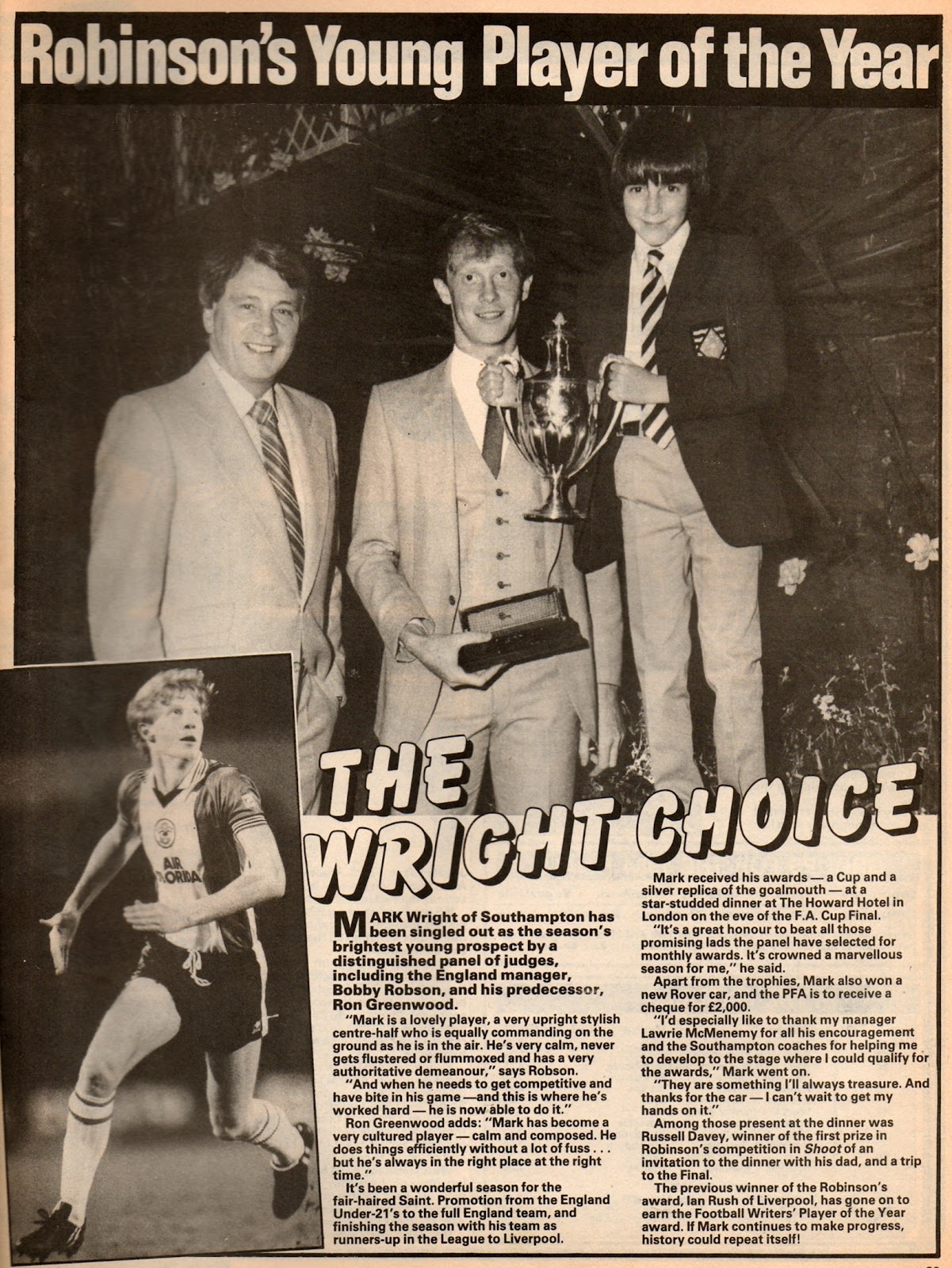 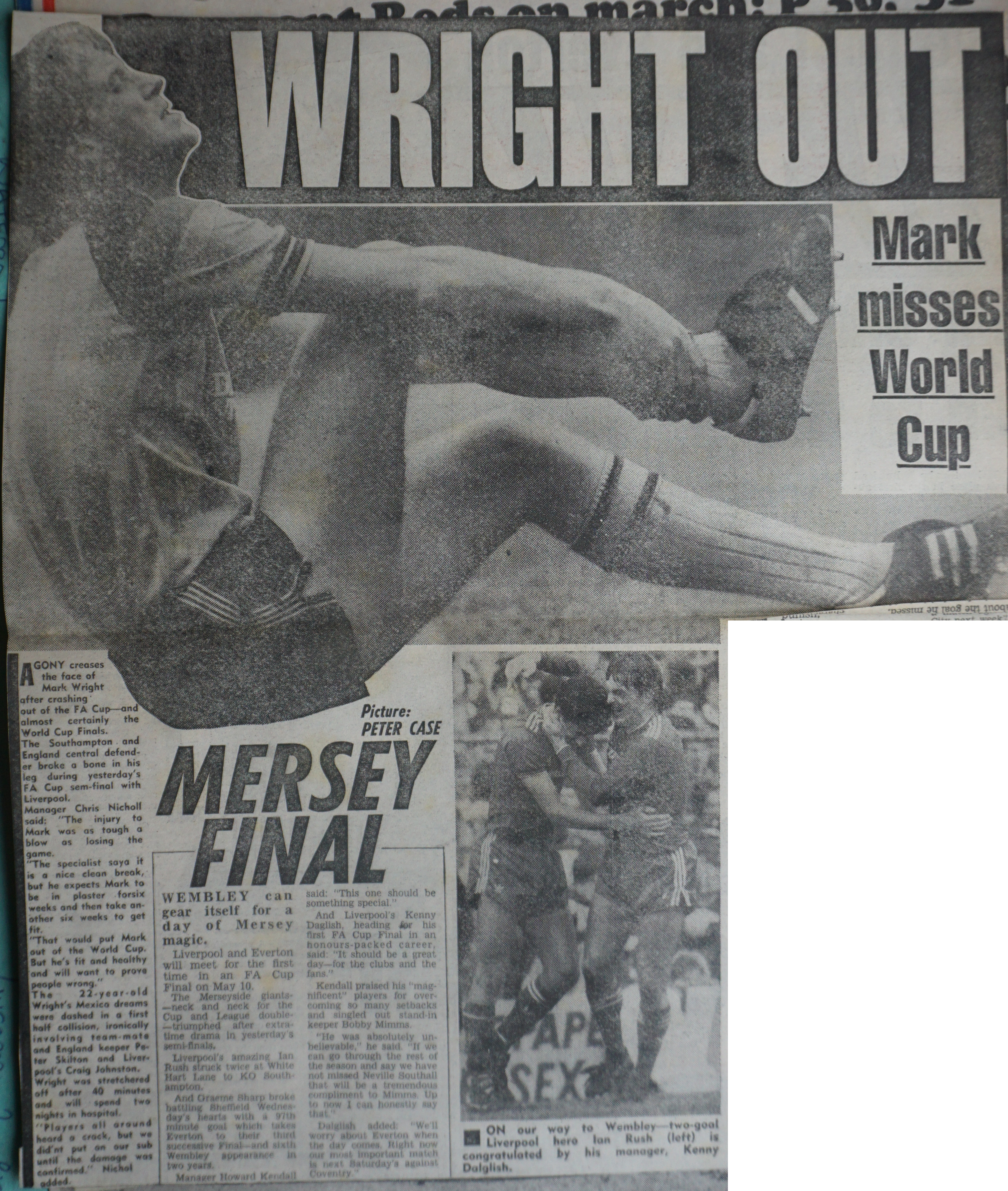