Walters made a name for himself in the Aston Villa team in the 1982/83 season at the tender age of 18. Unfortunately for him Villa were on a slow decline after winning the League in 1981 and the European Cup in 1982 and were eventually relegated in 1987. Villa went straight up again but halfway through their first season back in the top-flight Walters was enticed to Rangers where Graeme Souness could offer him European football whereas the English teams were still banned from Europe following the Heysel disaster. Walters joined the likes of Trevor Steven, Gary Stevens, Terry Butcher, Chris Woods and Ray Wilkins and the former Villa star was a tremendous success but suffered terrible racial abuse. Walters' Rangers debut was on 2 January 1988 in an Old Firm derby at Parkhead. Celtic fans came dressed in fancy dress monkey suits, made monkey noises aimed at Walters and threw bananas on to the field. Walters was pelted by all kinds of objects at Hearts' Tynecastle "That was the worst place of all. It wasn't just the abuse because I can handle that," Walters said. "It was all the objects that were being thrown." Souness envisaged Walters doing same amount of damage to English defenders in a Liverpool shirt.

Walters had only been at the club for three months when he was the darling of the Kop when Auxerre came to town in the first season that Liverpool were back in Europe. Liverpool had lost 2-0 in the first leg of the second round of the UEFA Cup. The hosts were 2-0 up and heading for extra-time when Jan Mølby's magnificent pass split the French defence in the eighty-fourth minute. Walters raced through and clipped a shot just inside the far post. Delirium followed and Liverpool were through to the third round. Walters' best season was 1992/93 when he scored 13 goals in 44 games and scored a tremendous double after coming on as a substitute against Kenny Dalglish's Blackburn Rovers on 13 December 1992 at Anfield. In the seventy-seventh minute Redknapp laid the ball into the path of Walters who cut inside a tiring David May and unleashed a drive that he described as the best goal of his Anfield career. Walters netted the winner eight minutes later. However, Walters' blessed step-over worked way too seldom. He was very inconsistent and tended to fade out of games. He was loaned out to Stoke in the last couple of months in the 1993/94 season after making almost as many appearances for Liverpool reserves in the Pontins League Division One as for the first team in the Premier League. Walters was on loan at Wolves for the majority of 1994/95 and his free transfer to Southampton in January 1996 was hardly a surprise. Walters had a short stay at the Saints and played regularly again for first division Swindon Town from 1996 to 1999. Second division Bristol Rovers was Walters' next destination in the 1999/00 season where he performed for three years, finishing his League career.

After retiring from playing full time, Walters had brief spells with non league Ilkeston, Dudley and Willenhall and coached Aston villa's junior teams. He now does occasional media work, is part of the Rangers legends set up and has a small property portfolio. In 2018 his autobiography 'Wingin It' was published.

The middle name of Mark Walters, Everton, always comes up and of course should be highlighted, considering his association with the Reds. Asked by a Red if he would ever consider changing his his middle name, Walters said: "No, well unfortunately my mother told me that if I change any part of my name she’ll disown me, so that one’s for life."

Match report from British Soccer Week on Liverpool - Blackburn on 13.12.1992.

Asked by ynwa.tv: Now have you had the chance to change your middle name yet?

[laughs] No, well unfortunately my mother told me that if I change any part of my name she’ll disown me, so that one’s for life."

"Wally is probably remembered for his step-over trick that he's still foxing players with these days. As a veteran footballer he's fantastic. He just had that step-over, that no matter how much you knew it was going to come, you just didn't know how to handle it. he was effective and certainly Graeme Souness, who brought him to Anfield, was a big fan of his." 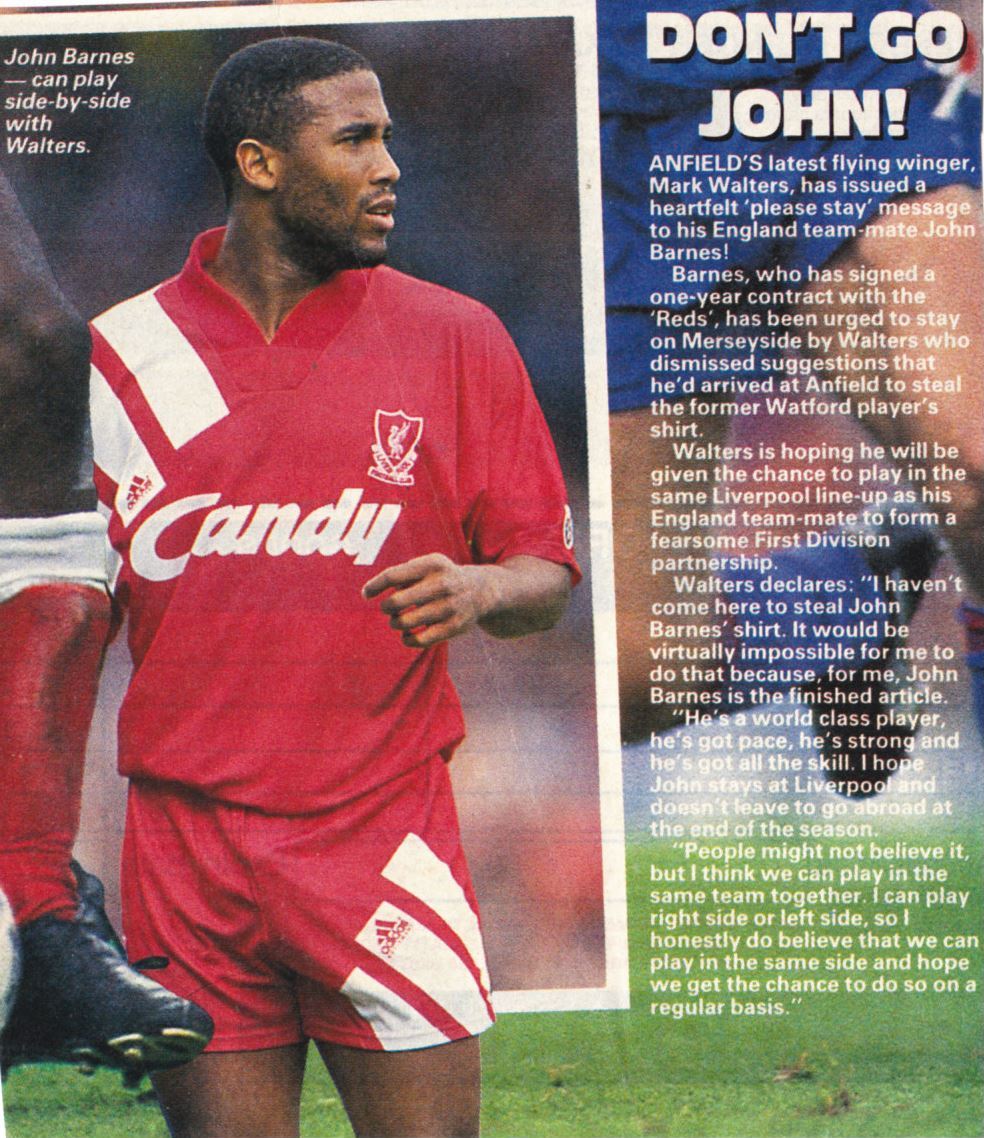 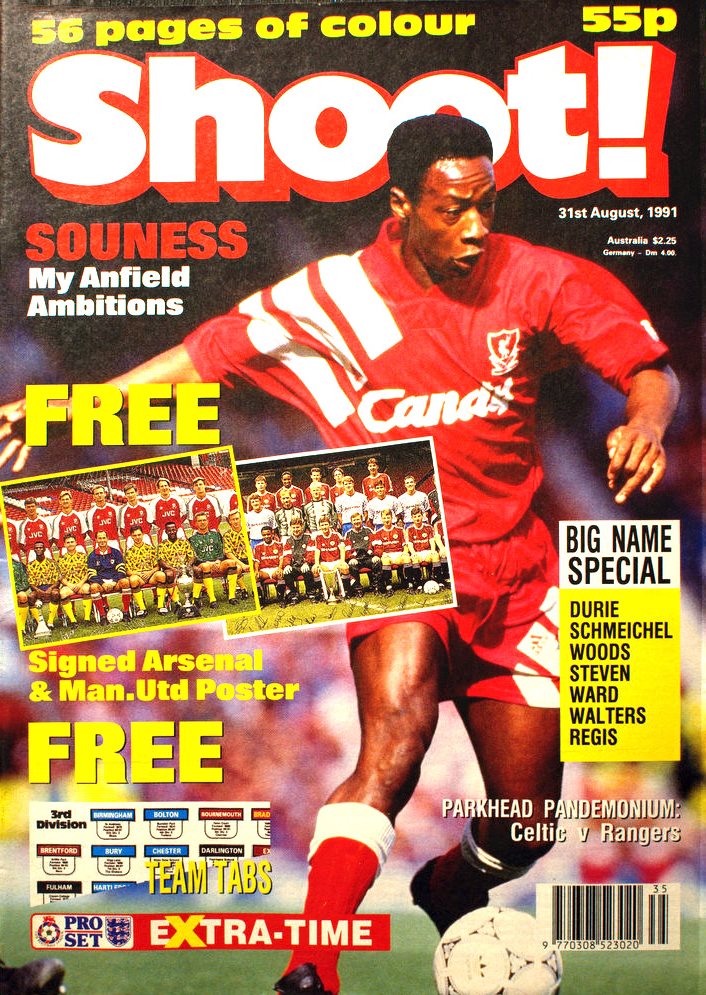 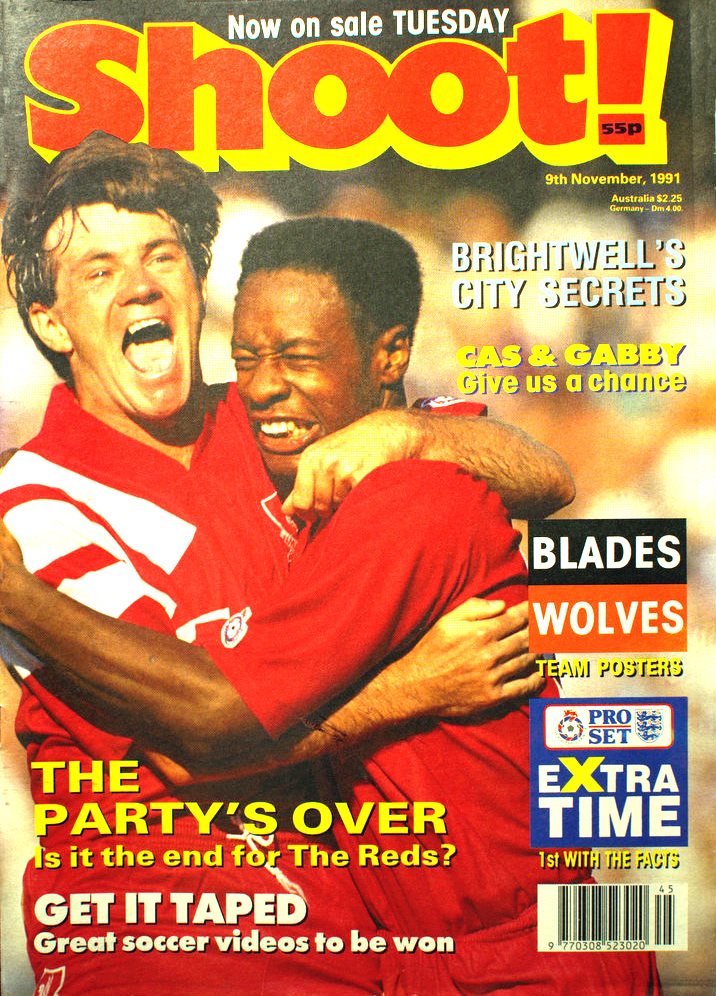 Mark Walters on the cover of Shoot! 9 November 1991 Rangers' Mark Walters on the cover of Shoot! 12 November 1988