Tommo was a favourite among the Liverpool crowd as he was a local boy always willing to give 100% although his fierce attitude sometimes got the better of him. After featuring mostly as a substitute the diminutive terrier made two starts in a row in November 1998 as Roy Evans departed Liverpool leaving Houllier in sole charge. In January 1999 Thompson was sent off in a reserve game against Blackburn and following a row with Houllier was sent to train with the kids at the Academy for two weeks. Three months later Fowler's six-game suspension forced Houllier's hand and as Steve McManaman was pushed up front to fill the void, Thompson made three consecutive starts on the right wing. He said he had learnt his lesson. "Maybe I was a bit reckless," Thompson admitted, "but my time training at the academy did change me. I had to bite my lip a few times and learn to keep my head down and get on with it." Houllier made wholesale changes to the squad in the summer of 1999 but thankfully for Thompson he was very much involved and enjoyed his best run in the side. He also contributed to the scoring, netting the winner against Chelsea in October and in the 4-1 win over Sheffield Wednesday, mostly noted for Steven Gerrard's debut goal, Thompson rounded off a brilliant solo run with a left-foot shot which floated into the far corner. The 22-year-old seemed to have finally established himself at his boyhood club.

More trouble was, however, around the corner. In January 2000 Thompson was sent off again while playing for the reserves for punching Leeds United's David Hopkin in an off the ball incident. His suspension came at a very inopportune time as Houllier explained to the Liverpool Daily Post. "If he is a tennis player and argues with the referee or whatever then he is the only one to suffer, but football is a team game and it is the club and his teammates who are suffering from his silly behaviour. At a time when we are competing for Europe we don't need that. We need him to be available. We need as many people as possible because we are a little short on personnel. I think players can confuse commitment with a selfish attitude sometimes and if he wants to make it at the top he has got to control himself. I am very angry." A couple of months later the pair seemed to have made amends as Thompson returned to starting line-up. In fact, Thompson was sold to Coventry City before the start of the 2000/01 season as Houllier's revolution continued apace. When Markus Babbel was loaned to Blackburn Rovers in 2003 Thompson quipped: "Once you fall out with the Liverpool manager, you're finished at the club," to which Houllier replied: "I'm glad David Thompson is not at the club any more." Ironically the Liverpool team was crying out for years following McManaman's and Thompson's departure for a player similar to their style who was able to run the length of the field.

Thompson spent two years with the Sky Blues becoming one of their key players scoring a creditable 15 goals in 66 League games. Despite Coventry's relegation from the Premier League in 2001, Thompson stayed and continued to perform well as the club attempted to make an immediate return to the top league. In August, 2002 the player was given the opportunity to re-establish himself in the Premier League with Blackburn Rovers. Thompson even earned himself a call-up to the England squad in October 2002 but unfortunately had to withdraw through injury. Severely affected by different injuries, Thompson struggled to make the big breakthrough at Blackburn and Rovers eventually let him move to Wigan Athletic in January 2006. However, at the end of the season Wigan also released him and he signed a one-year contract with Portsmouth. But frustrated at not being given much of a chance on the south coast, Thompson returned to the north-west to sign for Bolton Wanderers in January 2007. He played only eight League games for Bolton before they too released him and towards the end of the same year he started a trial with Sheffield United. Only days later Thompson announced that he would be retiring as an active footballer because of his constant injury problems, particularly to his cartilage.

David Thompson Talks to This Is Anfield

An article from Liverpool Daily Post on 13th January 2000

"Once you fall out with the Liverpool manager, you're finished at the club."

David Thompson was asked about Babbel's arrival at Ewood Park

"I'm glad David Thompson is not at the club any more."

Houllier in retaliation to Thompson’s comments about Blackburn's capture of Babbel that "Once you fall out with the Liverpool manager, you're finished at the club." 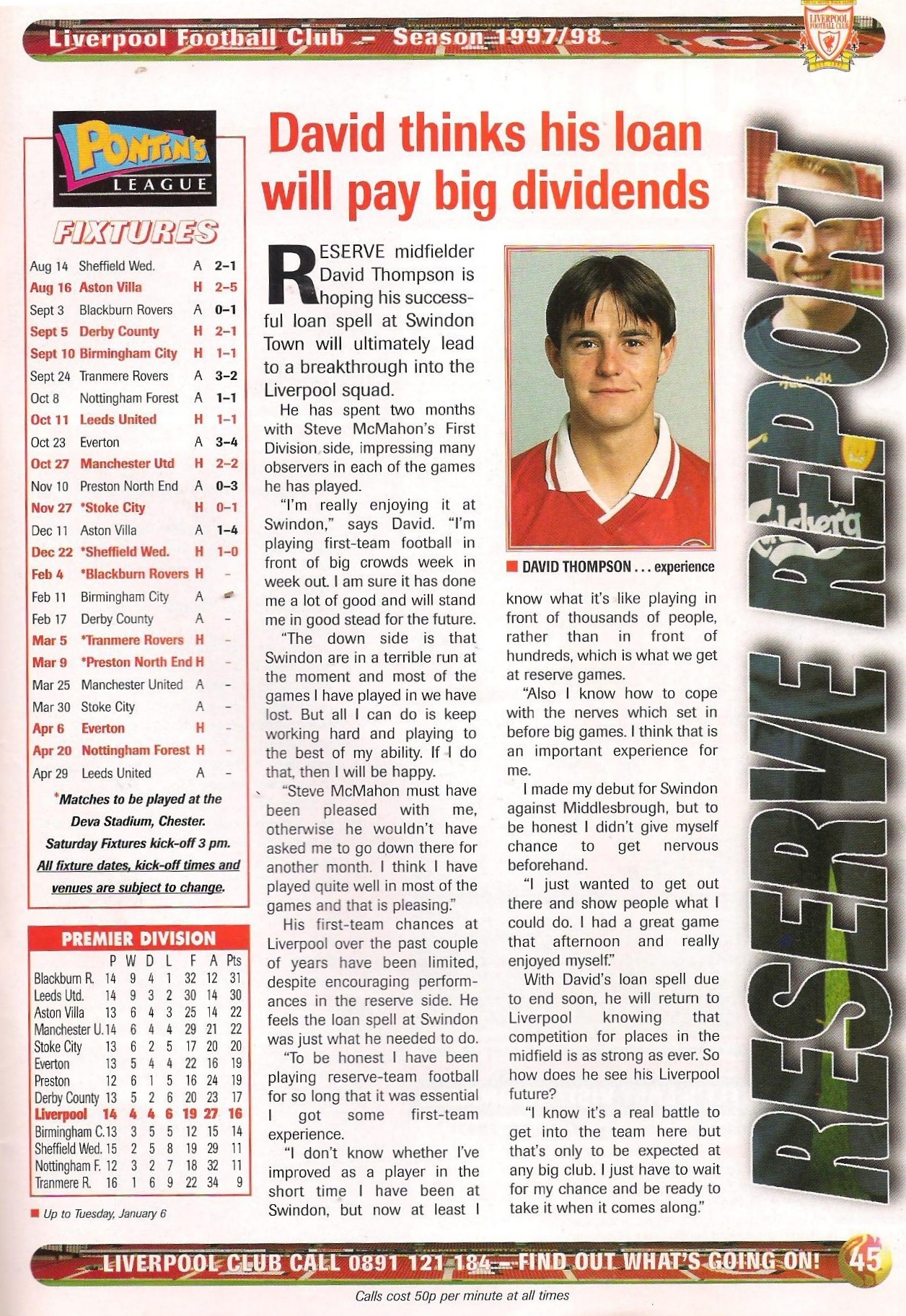 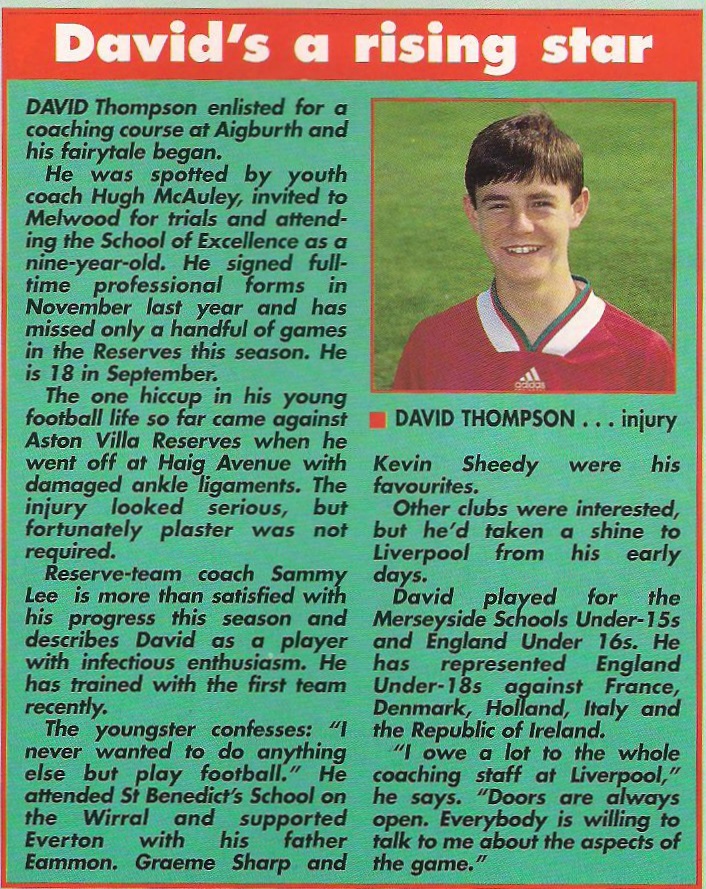 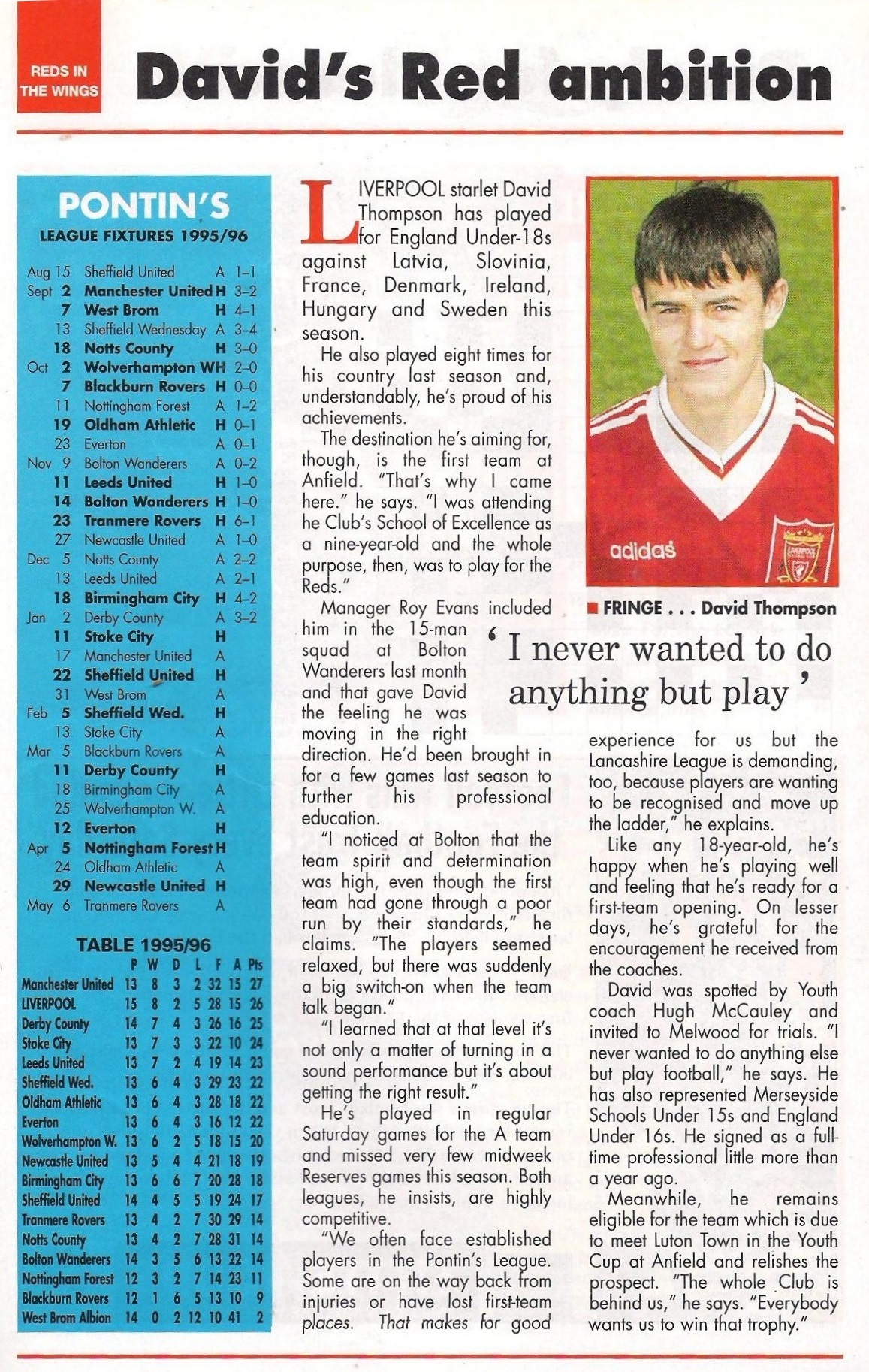