Saunders had long been admired by football fans for his exploits with Oxford and Derby and he was certainly a big signing for Liverpool when he arrived along with Mark Wright from Derby. Saunders was on his way on a free transfer to Australia when the Brighton manager spotted him in a Swansea reserves' game. He scored 23 goals in his first season at Brighton and first division Oxford bought him the following season in March 1987. Former Liverpool favourite, Mark Lawrenson, was Oxford's manager at the time with Robert Maxwell as his chairman. After scoring 33 goals in 73 games for the club Saunders was sold against the wishes of Lawrenson to Derby in October 1988. Lawro handed in his resignation in the process. Saunders scored a decent enough 57 goals in 131 games for Derby, which Robert Maxwell owned as well.

Son of former Liverpool half-back, Roy, Dean played in a struggling Liverpool side, whose passing game didn't suit him at all. He was used to Derby's counter-attacking style, scoring many of his goals by using his exceptional pace. Saunders wasn't very prolific in the League with about one goal every four games but flourished in the UEFA Cup with nine goals in five matches that included a quadruple against Kuusysi Lahti. He contributed two goals to Liverpool's successful FA Cup run. A cash-flow problem was said to be the reason he was sold after only one full season at Liverpool. Saunders signed off with his second goal in seven matches in September 1992 in his sophomore season at Liverpool. Saunders felt hard done by leaving the Reds after such a short stay. "Graeme called me in one day and told me he needed a centre-half [Torben Piechnik], and that he could raise the money by selling me to Aston Villa," Saunders said. "I couldn't believe he was prepared to let me go, but he said he didn't think my partnership with Ian Rush had worked out, and Rushy wouldn't be the one going anywhere. That was it." Souness was left to suffer at the hands of Saunders only nine days after his departure from Liverpool when he scored two goals in Villa's 4-2 victory over the Reds.

Saunders was reunited with Souness when the pair spent the 1995/96 season together with Galatasaray in Turkey. For Saunders it was a fairly successful season and 15 goals from 27 Turkish League matches must have helped him secure a contract with Nottingham Forest in 1996. He struggled for goals at the City Ground as the club was relegated from the Premier League. Shortly into his second season he moved to fellow first division club, Sheffield United, before moving again abroad in 1998, this time to Benfica in Portugal where once again his manager was Souness. Saunders returned to England after a single season based in Lisbon and joined Bradford City, spending two seasons with them in the Premier League before retiring as a player shortly before his thirty-seventh birthday.

Dean Saunders became a coach at Bradford before again linking up with Graeme Souness not once but twice as coach; first at Blackburn Rovers and then Newcastle United. But when Newcastle sacked Souness early in 2006, Saunders lost his job as well. In the following year he began taking the certificate in Football Management course run by the University of Warwick; and this led to him being granted his UEFA Pro Licence coaching badge, a qualification that allowed him to be appointed as assistant to John Toshack with the Welsh national team.


In October 2008 Saunders replaced Brian Little as manager of Wrexham, with the club from north Wales now in the Conference following their relegation from the Football League earlier in the year. The responsibility of being a football club manager did not prevent Saunders from retaining his position with the national team. Although Wrexham's results were very poor towards the end of the 2008/09 season Saunders continued to be the Wrexham manager as the club attempted to regain its Football League status. The Welsh club finished in eleventh at the end of the 2009/10 season but a year later qualified for the end-of-season play-offs by finishing fourth. Wrexham were unfortunately knocked out by Luton Town, that had finished one place and three points above them after the regular season. In the last week of September 2011 Saunders was appointed manager of Championship club Doncaster Rovers. However, he was unable to save Rovers from relegation as they returned to League One after taking only 36 points from their 46 League fixtures. Having guided Rovers to second place in League One Saunders was confirmed as the new manager of championship's Wolverhampton Wanderers in January 2013.

Saunders failed to prevent Wolves sliding into League One at the end of the 2012/13 season and it therefore wasn't a major surprise when he was dismissed as manager three days after relegation was confirmed. Just after Christmas 2014 Saunders was named as the interim-manager of Crawley Town after the previous incumbent John Gregory stood down for health reasons. Saunders became manager of League One side Chesterfield on 13 May 2015. After four consecutive league defeats Chesterfield announced on 28 November 2015 that they had parted company with Saunders.

Match report from British Soccer Week on Wimbledon - Liverpool on 23.11.1991.

"I'll always be grateful for winning the FA Cup with Liverpool, but their expectations were so high you always had the sense that nothing short of winning the title was really good enough. 'There was a slightly depressing atmosphere around the place, as if everyone knew they weren't quite matching up.

Graeme called me in one day and told me he needed a centre-half [Torben Piechnik], and that he could raise the money by selling me to Aston Villa. I couldn't believe he was prepared to let me go, but he said he didn't think my partnership with Ian Rush had worked out, and Rushy wouldn't be the one going anywhere. That was it."

Ron Atkinson Villa manager:
"There's no way they wanted to sell him. They let him go because I went in with the right offer at the right time."

Terry Yorath, Wales manager:
"You have to know your product. At Liverpool Dean has been going into areas where he can't score goals. Liverpool have always been known for playing good football, but if you haven't got the players available to play the ball at they right time then you're not going to get the best out of players like Dean and Ian Rush. Ron Atkinson is the right type of manager for Dean Saunders."

Saunders was perplexed: "I have mixed feelings about leaving Liverpool after only one full season. I thought I did quite well scoring 23 goals in 50-odd games and also winning an FA Cup medal." 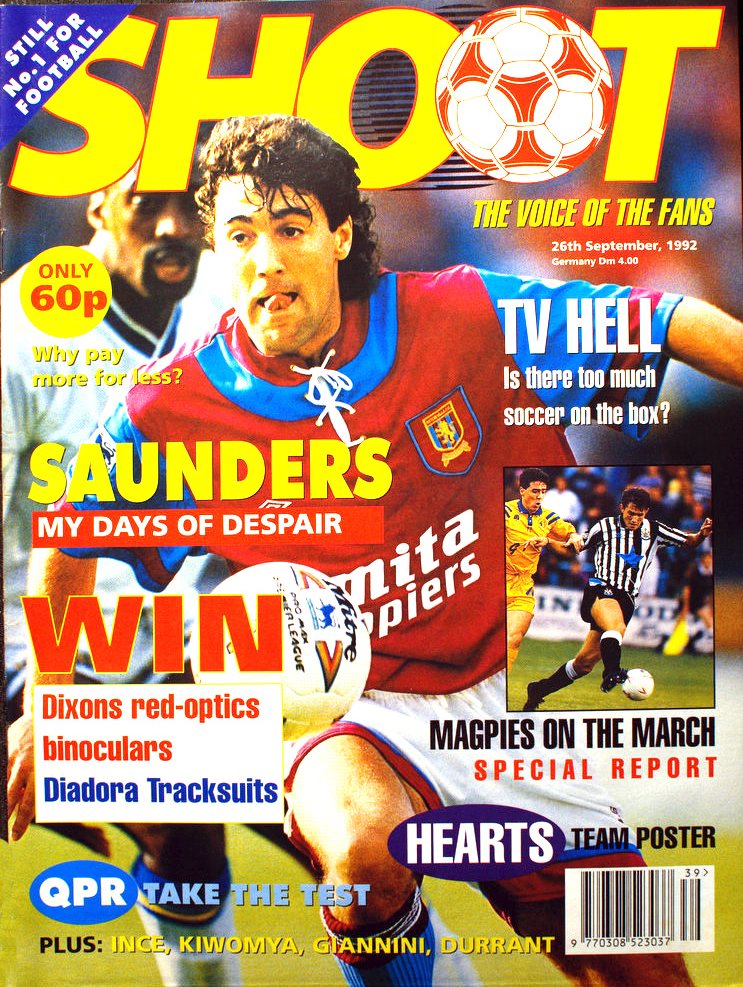 Aston Villa's Dean Saunders on the cover of Shoot! 26 September 1992 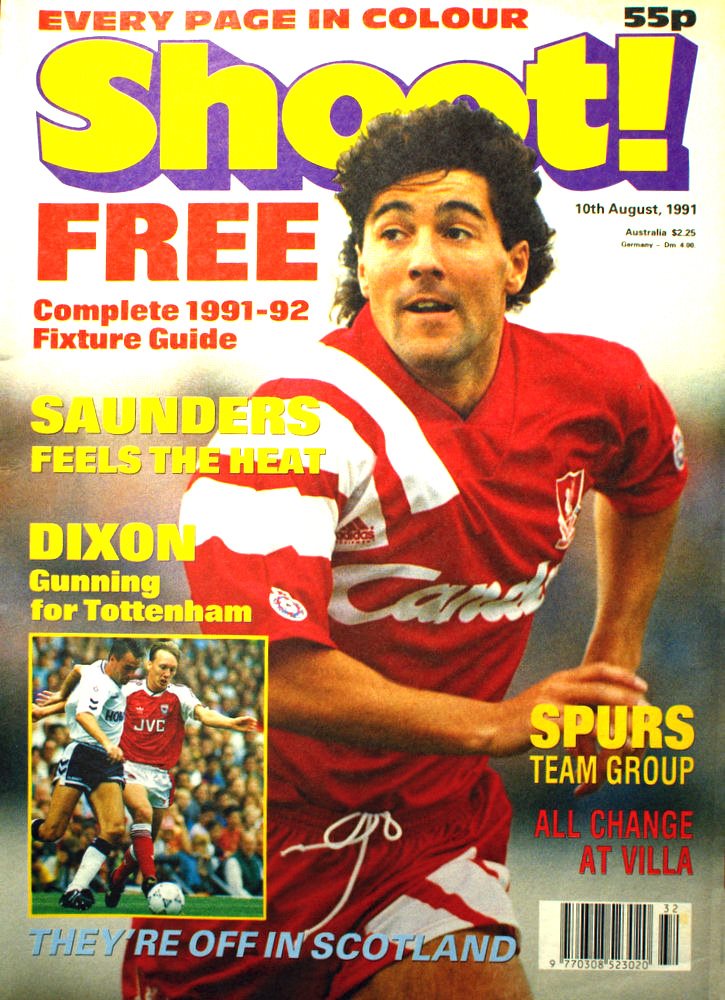 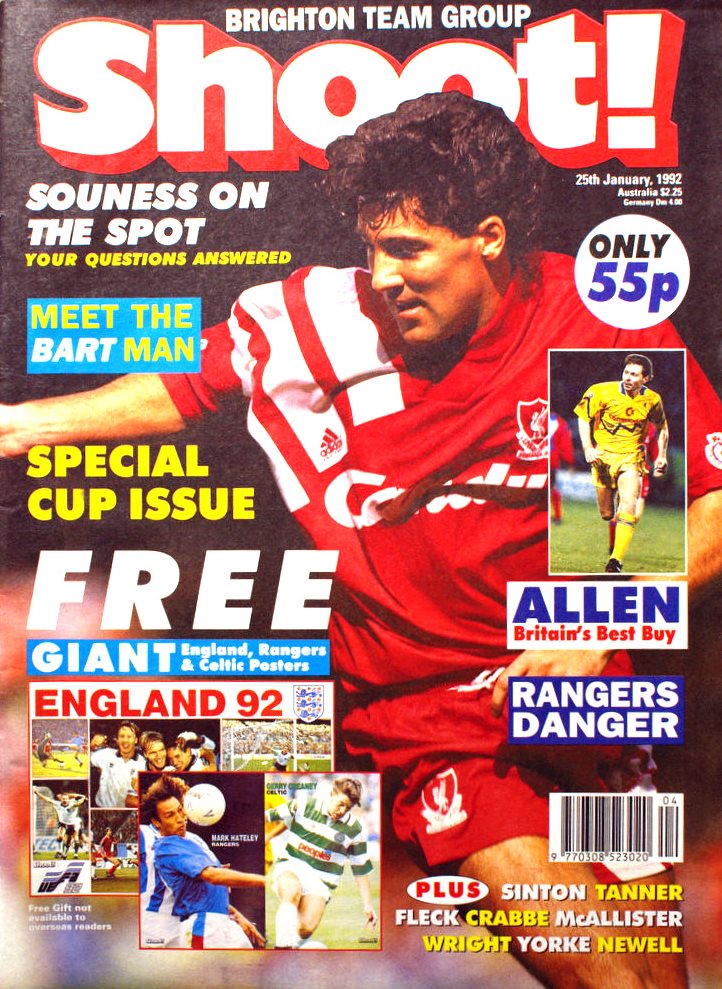 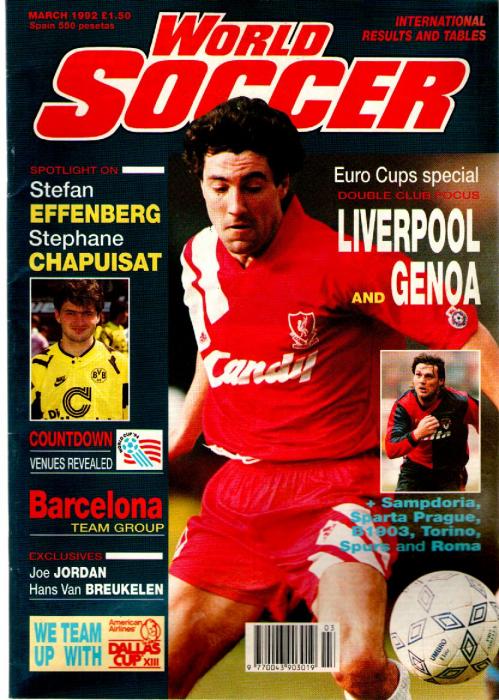 Dean Saunders on the cover of World Soccer March 1992 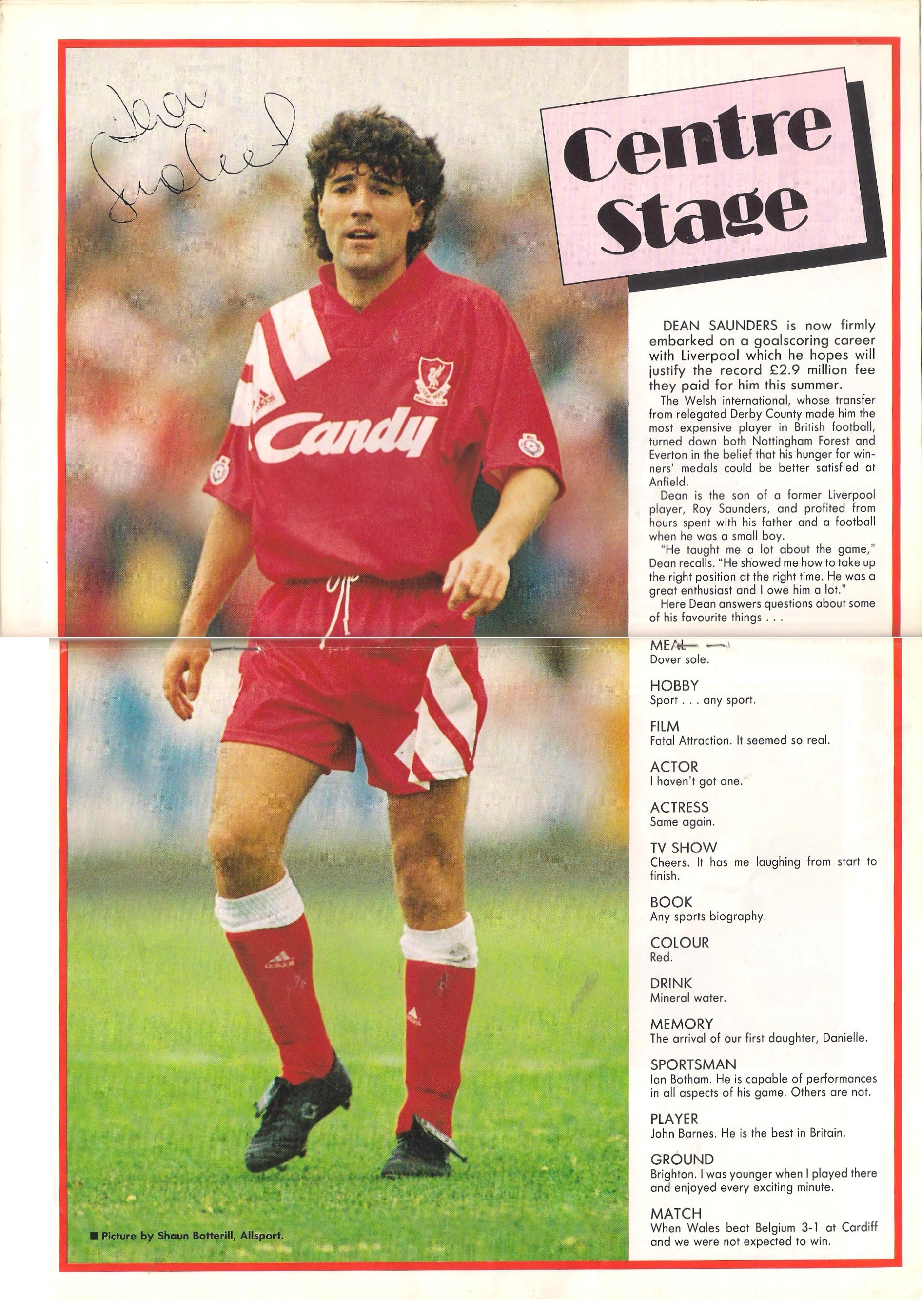