Peplow scored 19 goals for the reserves in the 1968/69 season, but sadly he's remembered as just another forward who never made the grade at Liverpool. Anfield apprentice and local boy Peplow signed professional forms for Liverpool in January 1966 having joined them 18 months earlier. After waiting patiently in the reserves the twenty-year-old played in three consecutive first-team matches in November 1969. He made his debut against West Ham at Anfield in the first game televised in colour by the BBC's Match of the Day. He celebrated a 2-0 victory over the Hammers led by Bobby Moore and the following game was a Leeds draw. His last first-team appearance was an eventful game in the Fairs Cup against Vitoria Setubal at Anfield. Liverpool had lost the first leg 1-0 and being a goal down at half-time Peplow was substituted for Roger Hunt. The goalscoring legend scored his last-ever goal for the club in the final minute ensuring a 3-2 victory. The players waited around for extra-time, but the referee informed them that the away-goals rule came into effect after 90 minutes and since the Portuguese side had scored two goals at Anfield the Reds were out. In typical upbeat mood Bill Shankly refused to acknowledge that the Reds were well and truly conquered: "We were beaten by a penalty, an own goal and the rules of the competition."

Peplow was loaned to second division Swindon in the 1970/71 season, playing 15 games and scoring six goals, impressing them sufficiently to sign him permanently. He played a couple of seasons at Swindon before following manager Dave Mackay out the door for a brief spell at Nottingham Forest. Peplow made a fortunate move in his career when his old teammate, Ron Yeats, who was boss at Tranmere, convinced him to join him in the Wirral. Peplow told the Liverpool Echo: "Ron had plans to use me as a central midfielder but I could not tackle rice pudding. He tried me out wide but it was John King, Ron's successor, who converted me to a right winger." Peplow established himself finally at Tranmere Rovers where he played 248 third and fourth division games and scored 44 goals from 1973-1981, his greatest strength being the accuracy of his crosses.

Peplow recalled a funny story related to his West Ham debut when interviewed by the Liverpool Echo in 2007. It was Peplow's wedding day in 1995 and his best man was an old Tranmere teammate by the name of Barrie Mitchell. The Scot sprang a surprise on Peplow at the reception, presenting him with a video. "The cover said something like 'Love Techniques for the Beginner'. I thought Barrie had got hold of a naughty video by way of a joke, but it turned out to be a specially commissioned recording of my debut for Liverpool," Peplow revealed. "Barrie had been in touch with Ray Stubbs at the BBC. Ray had been in the reserves at Tranmere when we played - before he moved into broadcasting. Ray got the commentator, John Motson, to dig out the recording of that old Liverpool - West Ham match. It was on film and they managed to get it transferred to video. It was a wonderful surprise." 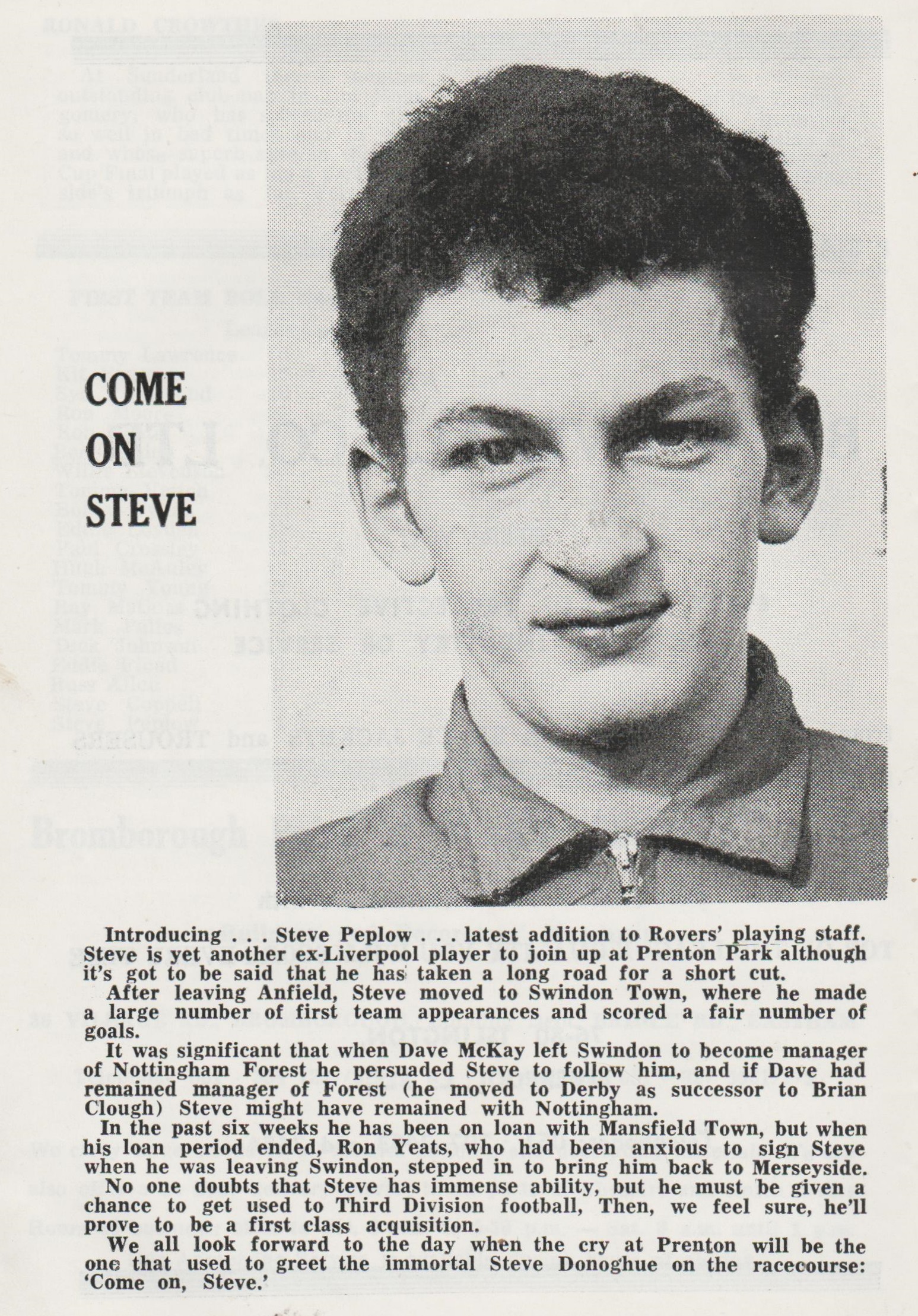 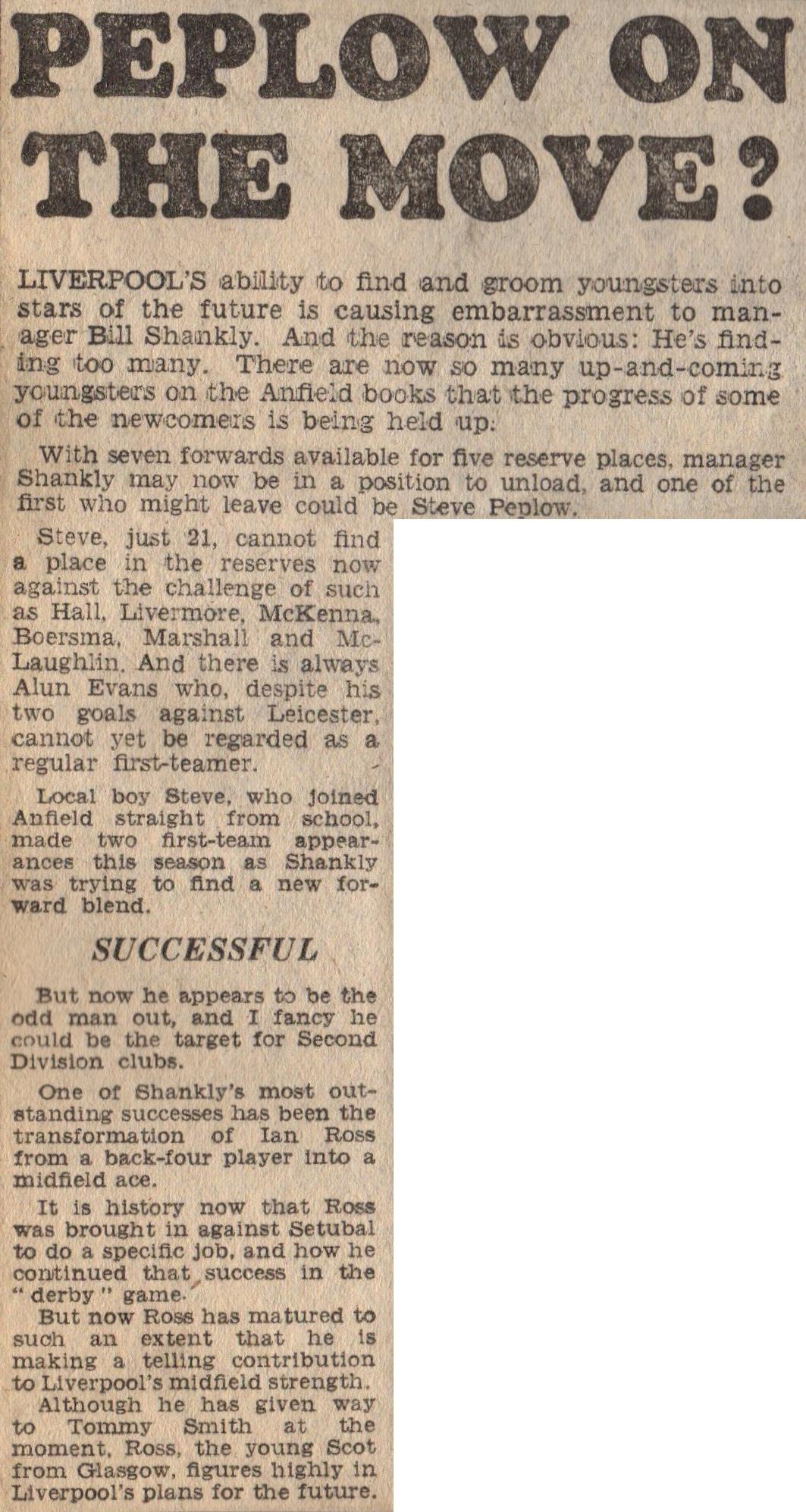 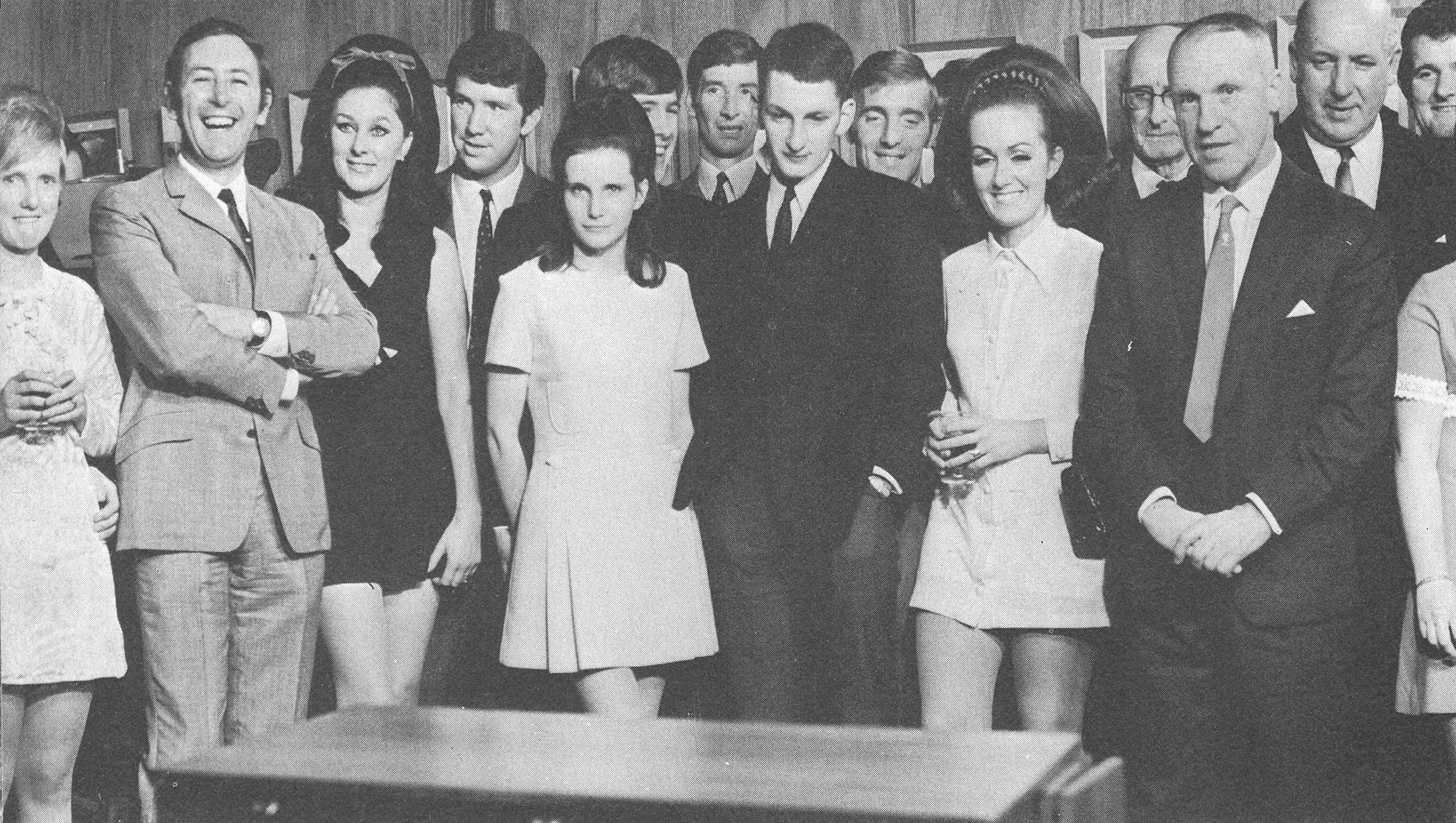