Kvarme impressed at Norway's most successful club, Rosenborg, who proved their quality by reaching the quarter-finals of the Champions League in the 1996/97 season. Kvarme was available on a Bosman in January 1997 and seemed to be heading to Stabæk when Liverpool intervened. Kvarme's former teammate, Stig-Inge Bjørnebye, was excited at the prospect of teaming up with "Beto" again. "Bjørn is very quick defensively. I remember training with him at Rosenborg and he was terrible to play against because he's very tough," Bjørnebye said. "I also think he'll be popular among the lads. He also liked to take part in the attacking game. He is positively minded and he is a very good professional." The centre-half, who could also feature at right-back, had an impressive start to his Liverpool career. Kvarme was in the starting 11 for the rest of the 1996/97 season only missing European games because he had already featured for Rosenborg in Europe. Kvarme continued to be first choice at the start of the 1997/98 season.

The first signs of trouble occurred on 18 October 1997 in a derby match at Goodison Park. Danny Cadamarteri made Kvarme look like an amateur in a 2-0 defeat. Kvarme kept his place but on 6 December another well-highlighted mistake against Manchester United made Evans single him out for criticism after the match. Kvarme kept his place surprisingly throughout December and was happy enough with his first year in English football. "I knew English football from the telly," he said. "I knew it was a quick game over here, but maybe it's even quicker than I thought. It's very physical as well. When I came, I think we were top of the League and we had a good chance of winning it. But we fell away towards the end of the season. We should at least have finished second. At first I thought a back-four would be better for me because I'd always played in that system. But I enjoyed a back three last season. This season, we bought some more new players and people thought we would be at the top again. The season hasn't kicked off as well as we would have hoped, but we have been doing well in the last few games and hopefully that will continue." The day after this article was published Kvarme had another poor display coming up against Coventry's Darren Huckerby in the FA Cup in January 1998. This was one game too many for Evans and he dropped the Norwegian. Kvarme was never a regular again and left at the start of the 1999/2000 season after Houllier had bought the central defensive pairing of Hyypia and Henchoz.

Not banging any drums!

Bjorn Tore Kvarme celebrates a year at Anfield this month, but you won't find him banging any drums. Press report from 02.01.1998.

Bjorne to be a Kop star!

A newspaper article by Ric George of "The Liverpool Echo" in 1997. 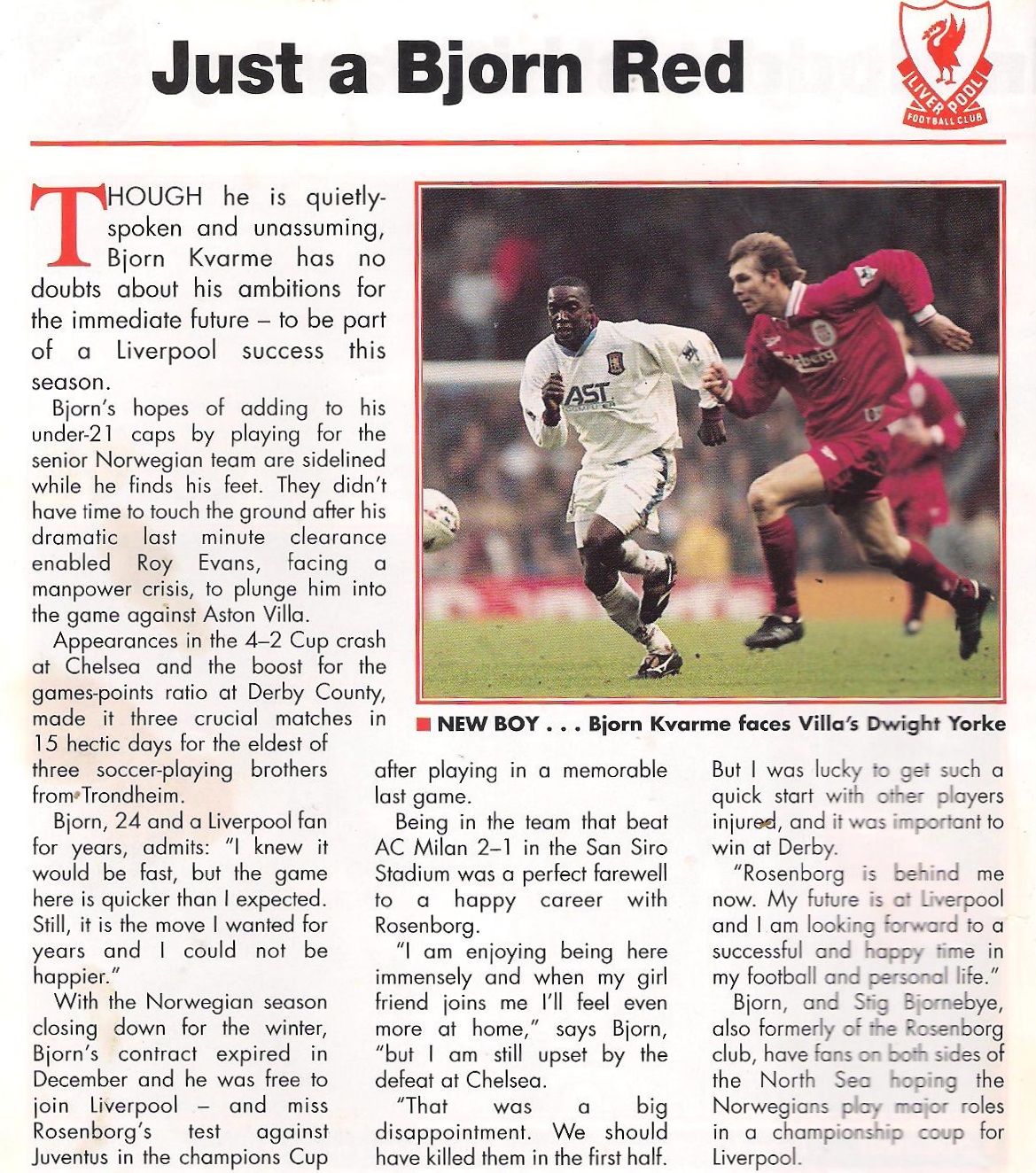 The game I remember