Kennedy was a fresh-faced 16-year-old when he joined Mick McCarthy's Millwall from Belvedere Boys Club in Ireland. He had been considered too light-weight by many English clubs to make the grade but after an intense weight training regime at Millwall he was fit enough to challenge the very best and he struck gold when his goal helped the Lions knock out Arsenal from the FA Cup in January 1995. Kennedy hit the headlines and a couple of months later;he became the most expensive teenage footballer in British history when he signed for Liverpool. Kennedy was four times in the starting line-up in his first season at Anfield almost scoring a tremendous goal on his debut versus Leeds but the ball hit the crossbar. He was only given one chance in the first 11 the next three years, making 14 substitute appearances. It was a mystery to many at the time why Liverpool spent a fortune on the boy and then never gave him a proper chance. After his departure from Liverpool Kennedy struggled to impress in the Premier League with Wimbledon and Manchester City but seemed at his right level when playing in the First Division. After a successful four-year spell at Wolves he joined Crystal Palace where he spent one season before joining championship side Cardiff in the summer of 2008.

Kennedy was 32-years-old when he arrived at Cardiff and in two seasons with the Bluebirds, Kennedy played in 66 championship matches. In 2008/09 Cardiff lost heavily on the final day of the regular season and lost their play-off place as a result. There was better fortune a year later. Cardiff comfortably qualified for the play-offs where they would meet Leicester City. The tie finished 3-3 on aggregate and with extra-time failing to produce a winner, the Wembley place for the winners was decided by a penalty shoot-out. Mark Kennedy struck his penalty into the corner to put Cardiff ahead 4-3 which proved to be the decisive spot-kick. Kennedy played from the start in the final but the Welsh club, despite taking the lead twice, were beaten 3-2 by Blackpool. In July 2010 Kennedy moved from Cardiff City for a fee of £75,000 to another club in the Championship, Ipswich Town.

Kennedy made 30 appearances for Ipswich during the 2010/11 season. He made his last appearance for Ipswich in November 2011 and joined the club's coaching staff at the end of the season. Kennedy went on to coach at another former club, Wolves, and on 16 January 2020 was appointed manager of struggling League Two side, Macclesfield Town. In a season disrupted by COVID-19, he was in charge of just 12 first team games before resigning on 12 August.

Hungry Leeds good bet for a place in Europe

"More genius from the Evans book of tricks. "I know, I'll spend £2m on the brightest young star in British football. When I see him hit the bar with his very first touch, I'll ignore him for two years". Now maybe Mark Kennedy will not be troubling MENSA for an application form judging by the interviews I've seen over here, but I'm delighted to see him do well (yes, even for Manchester City) after he was messed about at Anfield. Where was he going to play in a team that didn't use wingers? He'll probably never be good enough to play at the very highest level, but it always seemed like the most pointless signing in a decade chock full of them. Good luck to the man." 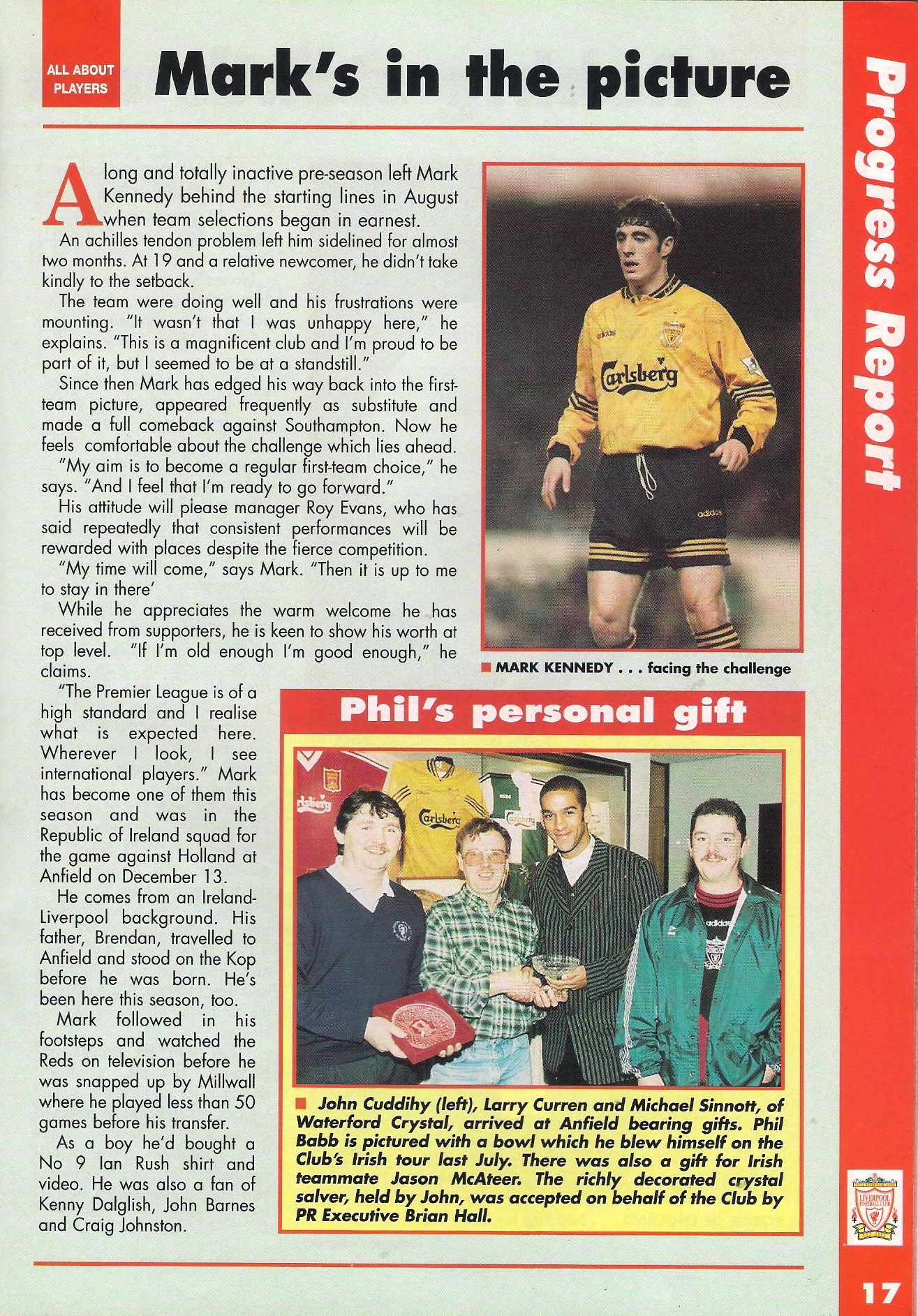 Mark is in the picture