Liverpool's move for Henchoz raised many eyebrows, Houllier utilizing a relegation clause in his contract guaranteeing him an immediate release if Blackburn received an offer of £3.5 million. Houllier saw Henchoz complementing Sami Hyypia's strengths and how right he proved to be. Henchoz was an extremely good man-marker, brilliant tackler and reader of the game and had a never-say-die attitude that inspired others around him. His face was perhaps as red as an apple after five minutes' play and he was huffing and puffing but despite his appearance, he had vast amounts of energy.

Henchoz began his career as a midfielder with Neuchatel Xamax in his homeland, making his debut at Santiago Bernabeu against Real Madrid at only 17 years of age when coming on as a substitute in the eighty-fourth minute on 11 December 1991. After four years at , Henchoz had a difficult two year's stay at Hamburger SV in the German Bundesliga where he said every man suffered because of tyrannic coach Felix Magath whose training methods drained Henchoz and his teammates. After a defeat, the team had to do six one kilometre (0,62 miles) sprints, all under three and a half minutes! Henchoz still had three years left of his contract when he was offered a four-year deal at Manchester United in the summer of 1997. Their discussions hit a snag relating to United's doubts over Henchoz' fitness who was recovering from surgery after breaking his ankle that had kept him out for four months. The 22-year-old international from Switzerland instead opted for Blackburn Rovers. The fact that Roy Hodgson was in charge, who had been Henchoz' coach at Xamax in the 1991/92 season as well as the coach of the Switzerland side from 1992-1995, undoubtedly played a part in his decision. Henchoz proved a key player in the Blackburn side and only missed six Premier League matches in two seasons. Rovers finished sixth in his first season but were relegated in his second in which he was chosen "Player of the Year" by the team's supporters.

Henchoz missed the first three months of the 1999/2000 season following a groin operation but settled quickly alongside Hyypia in Houllier's improving side. Henchoz credited Houllier for bringing much-needed discipline to the club: "When the team is preparing for a match and we're in a hotel, Gérard goes into all the players' rooms at around 10.30 pm to make certain everyone is where they should be. No one is allowed to drink alcohol before or after games - and if he finds out you have had even one small beer, you are OUT of the team immediately," Henchoz told the People. "If the manager is not satisfied that you have come with a good T-shirt and thinks that you are too scruffy, you are fined for that too. If you forget to switch off your mobile phone once you are at the training ground, it means a fine - and if it went off during a team meeting you'd be in major trouble." Liverpool had a terrific 2000/01 season and Henchoz played a big role in the FA Cup final against Arsenal in 2001 when he earned the nickname "Handchoz" after using his hand to prevent a certain goal from Thierry Henry in the first half and handling while lying on the ground in the second half. Liverpool went on to win 2-1 courtesy of a Michael Owen double. The H & H partnership at the heart of Liverpool's defence was still going strong in 2001/02 as Liverpool finished second in the Premier League. Henchoz was very much in the role of the unsung hero as Hyypia earned all the plaudits but the Swiss defender's teammates certainly appreciated his worth to the team.

Houllier's Reds went off the boil in the 2002/03 and 2003/04 seasons and Henchoz' lengthy absences through injury surely contributed to their defensive frailties. Djimi Traore in 2002/03 and Igor Biscan in 2003/04 deputised in Henchoz' absence. When fit-again in January 2004 after a succession of groin and ankle injuries Henchoz was longer automatic choice for but was included in the team at right-back. The 29-year-old whose contract expired in the summer of 2005 was then dropped from the team in March 2004 and he was apprehensive about his future: "Inevitably, I am asking myself questions. Even if it's for the good of the team, I still don't understand why I have been left out. I'm not used to sitting on the bench. The Liverpool fans don't understand it, either."

Henchoz famously never scored a goal in a competitive match for the first team but he did get on the scoresheet for Liverpool in a 5-1 win over Celtic in a friendly at Rentschler Field in East Hartford, Connecticut on 27 July 2004. A monumental moment for Henchoz and all involved! When Benítez took over in 2004/05 it became immediately obvious that Henchoz didn't feature in his long-term plans, not even as a back-up for Carragher, whom Benítez moved to of defence. Phil Thompson certainly appreciated Henchoz' contribution to his and Houllier's initial success at Liverpool: "If there's a block to be made in the area and you see a flying in to prevent a goal, you can be fairly sure it will have a no 2 on the back of it. Head, foot, whatever it takes to prevent a goal."

Henchoz joined Celtic in January 2005 but he struggled for fitness. Former Liverpool reserve striker, Paul Jewell, came to his rescue and he joined newly-promoted Wigan in the Premiership where he went straight into the starting 11 and made 32 appearances in the 2005/06 season. He rejoined Blackburn in 2006/07, but only featured in 16 games before being released in the summer of 2008. In October 2008 the 34-year-old announced that he had retired as a player. He stayed with the club's academy and became Blackburn's u-18 coach from 2009-2010.

In the 2009/10 season, Henchoz was manager of third division Bulle in Switzerland where he started his career as a youth player. Henchoz returned to management in 2019 when he had two short stints as manager of Neuchatel Xamax and FC Sion.

An article from Liverpool Echo in 1999.

Seven arrive in the summer of 1999

We wanted to refresh your memories how Liverpool has done in the market in recent years.

"Stephane is the quiet guy at the back, the unsung hero, but no-one should under-estimate his value to us. Our fans know just how good he is and so do his team-mates. He has made a lot of progress since joining us and I particularly like his attitude. You can see that every time he trains he treats each session as a big occasion."

"I'm very pleased with the choice I made. I was too young at the time and it was too big a step for me to make. When I went to Blackburn I preferred at that stage to play rather than go to United and maybe not play so often. In my mind I had already decided to go to Blackburn and I have no regrets because now I am at Liverpool and I am very happy here."

Ferguson came in late for Henchoz just as he was ready to complete a move from Hamburg to Blackburn.

"One of the quieter members of the team and you would hardly know he is around. Like most Swiss people, he is multi-lingual. He speaks about five different languages — not that you would know because it is sometimes difficult to get a word out of him — in English, French, German, Italian or Spanish!"

"I'd do anything to stop the ball crossing the line"

Stephane Henchoz, a cheeky remark from the quiet one

"If there's a block to be made in the area and you see a red shirt flying in to prevent a goal, you can be fairly sure it will have a no 2 on the back of it. Head, foot, whatever it takes to prevent a goal".

"Henchoz will not travel to Monaco. I need to talk with him again about his future. You cannot lie to players, you have to tell them when they are through. But Stephane is a good professional and he knows the situation."

"I was only at Liverpool for a short period, just two seasons. But, during that time, Stephane Henchoz was an ever present in our back four and I got to know his game well. He was solid and consistent. He was not a spectacular player by any means. There are not many oohs and aahs from the crowd when Stephane is on the ball. But that is no bad thing for a defender.

He just does his job well and with the minimum of fuss. He doesn't get flustered, he doesn't make bad decisions, he doesn't put a foot wrong. In fact, he is a bit of a rock. He is ice cool.

For some reason Stephane fell out of favour at Liverpool when the new manager came in. I can't understand it. The only reason I can think of is perhaps his age counted against him. Stephane is 30 now and maybe Benitez was looking for a younger player. But he hasn't brought anybody else in to replace him and he has pushed Jamie Carragher into his position in central defence. It doesn't make sense to me."

Gary McAllister on Stephane Henchoz just before his departure

"Not just a top player but a top bloke too. Henchoz was the favourite player of a girl at work's boyfriend. He wrote to Stephane via the club saying how good a player he is, how it's tough that he's out of the frame, and basically saying that he still has the support of the fans for what he's done for us. Couple of days later a package arrives, signed shirt and loads of other stuff. Top man. Good luck, though i dread to think how red yer posh cheeks are gonna get that far oop north."

"He had a tough start when he came because he was injured for a few months but once he started playing every week he was a tremendous player. He was as tough as any I've seen. He never lost a tackle or a challenge. He didn't look the strongest but he was a very strong boy. I think him and Sami were just an awesome partnership for five or six years." 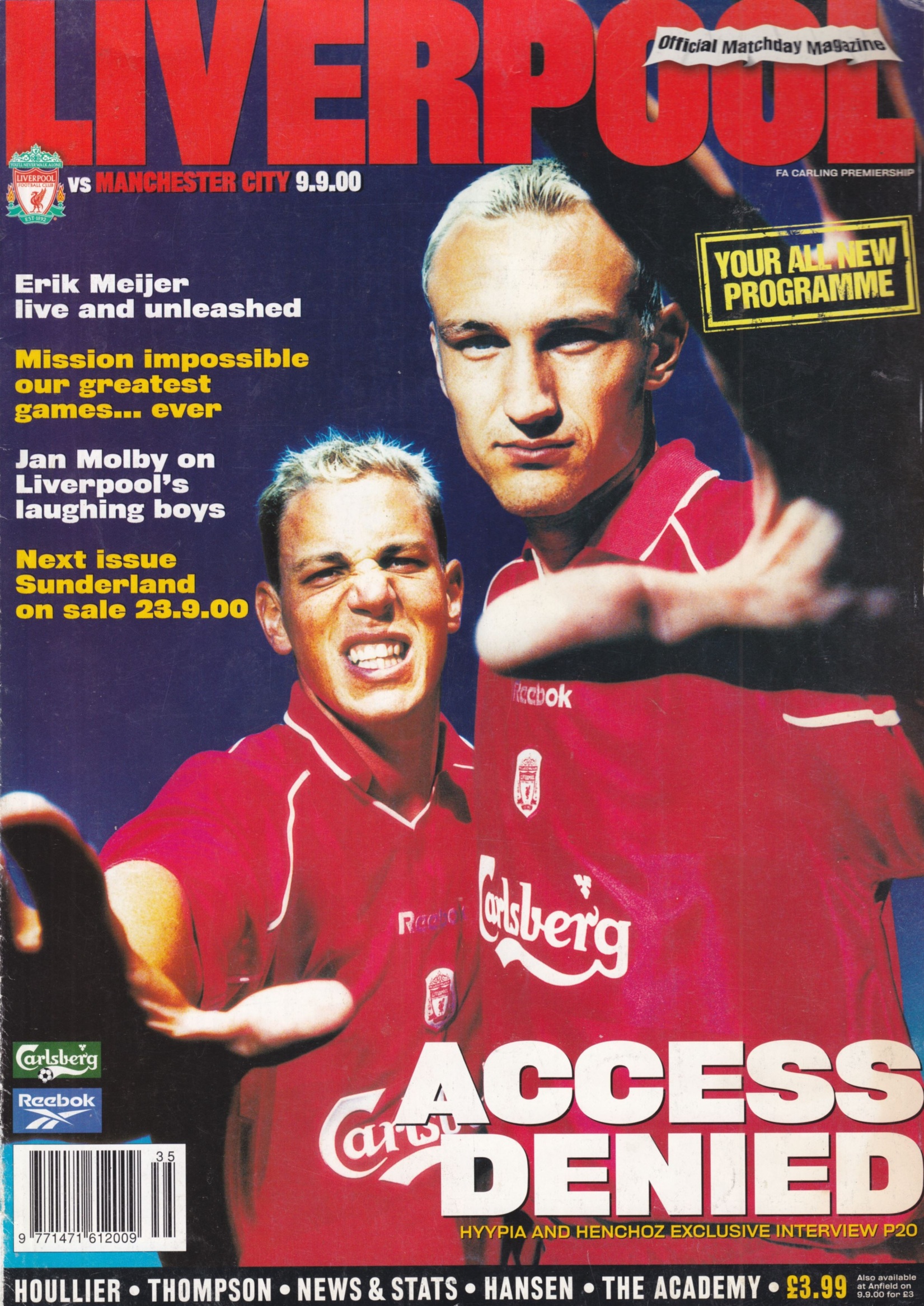