Harkness was a centre-forward at Carlisle when he impressed Kenny Dalglish in a youth cup tie against Liverpool and had only played 13 games for the first team when Liverpool snapped him up. Harkness was a big prospect and was appointed captain of the England u-18 team. Injuries in the reserves meant he was tried as a left-back and he stayed in that position for the majority of his Liverpool career. David Burrows was Liverpool's first choice in that position and Harkness didn't make his competitive debut until on his twentieth birthday in a 1-0 win over Queens Park Rangers. Aside from Burrows, Harkness had to fight for a place at one time or another with Julian Dicks, Steve Staunton and Stig-Inge Bjørnebye. Harkness asked Roy Evans for a transfer in the 1994/95 season. He made six appearances for first division Southend United from February to March 1995 and was free to move there but Ronnie Whelan's Shrimpers couldn't afford the transfer fee. An injury crisis at Liverpool gave Harkness a second chance at the club at the end of the 1994/95 season. Harkness signed a new three-year contract and was first-choice for the first half of 1995/96 playing as a left wing-back in Evans' 3-5-2 formation. Harkness was pleased that his patience had paid off as he told 90 Minutes in September 1995: "Sometimes I would be in the A-team and wondering what I was doing there when I could have been playing in someone's first team. "I thought, 'I don't need this'. There were times when I was on the verge of packing it in but I had a change of luck and one last chance to prove myself, and I grabbed it."

Come January 1996 Harkness got suspended for receiving too many bookings and that cost him his place as the team seemed to prosper without him. He was in the starting line-up on 6 April against Coventry when disaster struck following an hour's play. John Salako, who had just come on as a substitute two minutes earlier, launched into a scything tackle that broke Harkness' leg. He was out for 11 months, returning to the team when it was, unfortunately, struggling following a promising first half of the 1996/97 season. Harkness was a regular from December onwards in 1997/98. He landed in the midst of a race storm when his former teammate, Stan Collymore, accused him of racially abusing him at Villa Park in February 1998. Collymore had reportedly told him to he would properly break his leg this time which incensed Harkness. Collymore claimed Harkness called him a "lazy coon". The players threatened to sue each other and no truce was made despite PFA's attempts. Nine months later when the sides met again, only 12 minutes in, Collymore made a horrific tackle on Harkness that could have easily broken his leg. He was stretchered off while Collymore escaped with a yellow card. Collymore later got a second yellow for an altercation with Michael Owen. Thankfully Harkness was only out of action for three weeks.

Harkness was one of the first players Houllier got rid of in his first season after he had only started two games in 1999. Souness, who was the manager at Benfica, persuaded Harkness to move to Portugal in March 1999 where former Liverpool players Dean Saunders and Michael Thomas were plying their trade. Souness was sacked a month later and Harkness was banned from first-team participation for arguing with the club's president following Souness' sacking. Brian Kidd at Blackburn offered Harkness a way out of his Portuguese nightmare in August 1999. Souness replaced Kidd as in March 2000 but Harkness was sold six months later to Sheffield Wednesday who had just been relegated from the Premier League. He spent two years at struggling Wednesday before joining former teammate, Mark Wright, at Nationwide Conference Chester City when his contract expired in July 2002. Four months later 31-year-old Harkness called it quits following a series of injuries.

Article from Sunday Mirror on 22 November 1998.

Harkness fights for his place

Harkness is a broken man

"I was being wound up all game and was getting racial abuse ... Harkness called me a coon. There were also other things said that were even worse. It was racial abuse of the worst kind and totally out of order ... It hurt me very much indeed and I am still considering whether to make an official complaint. I went out of my way to tell the black players at Liverpool what had happened. Harkness has to live with them as well as himself."

Stan Collymore made public accusations against his former colleague, Liverpool defender Steve Harkness, after playing for Aston Villa at Villa Park in March 1998 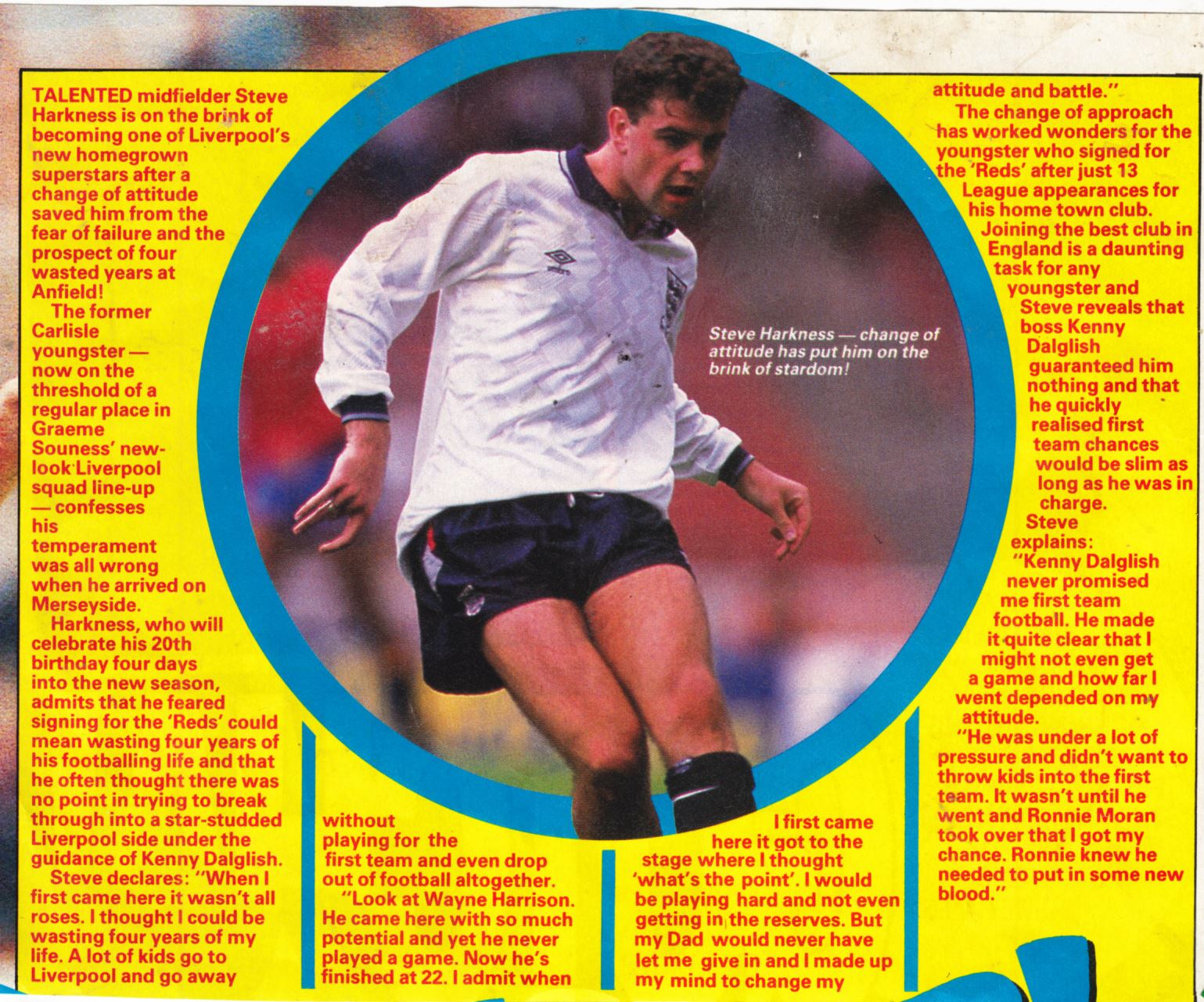 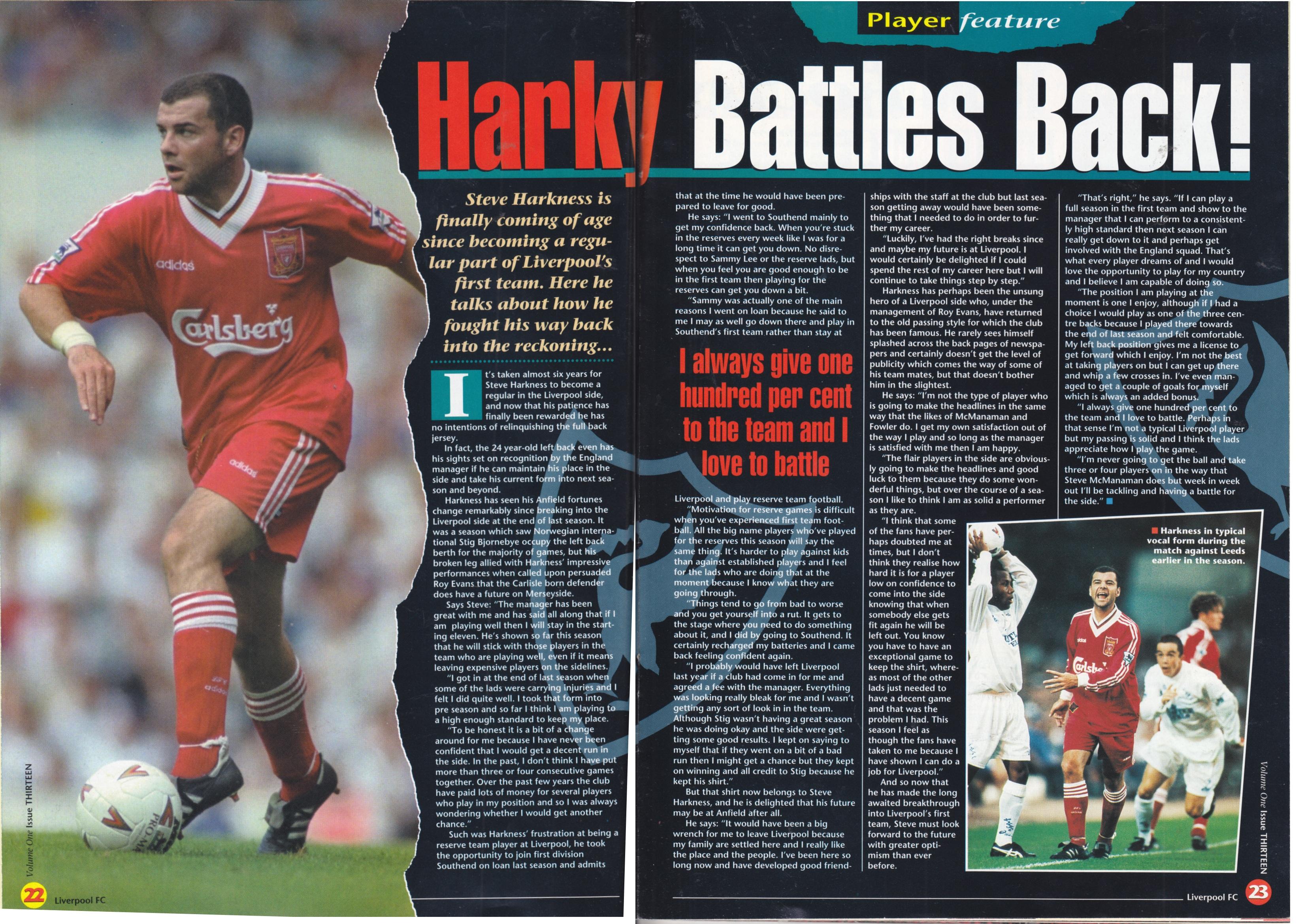 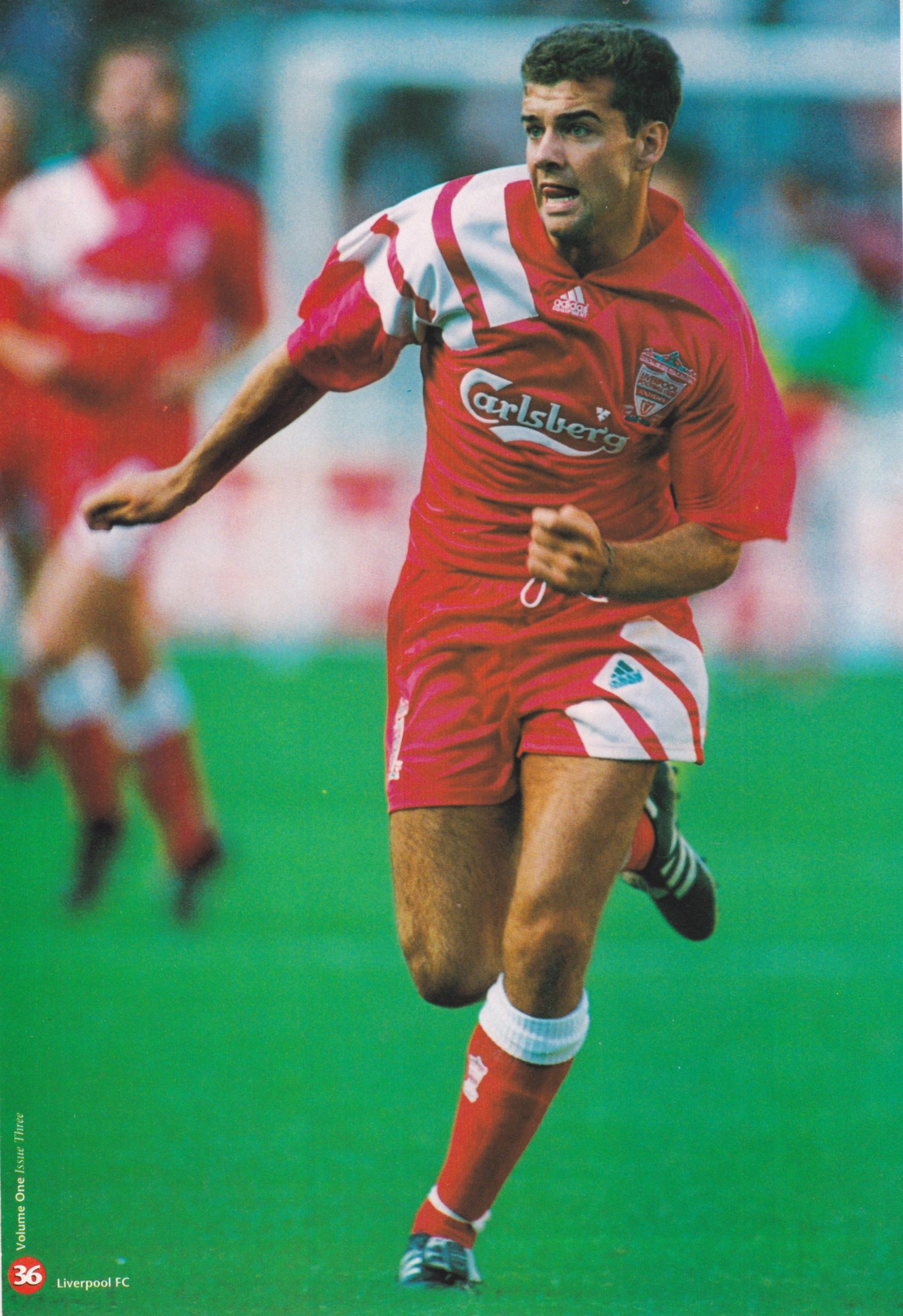 Poster in the LFC Magazine in 1994