"I first came on the Kop as an eight-year-old, then I played, coached and now I'm the figurehead. It is special because this is the team I've supported and loved all my life. But it isn't Roy Evans team. I'm just shaping its destiny for a while." Significant words from then-manager Roy Evans who was at the club for 33 years. Bootle-born Roy was an apprentice at Anfield before signing professional forms when he was 17-years-old in October 1965. The defender had to serve a different kind of apprenticeship in Liverpool's reserve team and didn't see a hint of first-team action until nearly the end of the 1969/70 season when Geoff Strong's injury opened the door for him. The Liverpool Echo wanted a quote from the local Evans after he made his debut against Sheffield Wednesday at Anfield. Evans left quite an impression in print at least when he responded: "When I told my mum I was in the team, she was so surprised she couldn't eat her tea." Shankly told the press that: "this boy Evans has the heart and guts to become another Gerry Byrne." Strong returned in the following game against Everton but was out again for the next two matches in which Evans featured. Ian Ross started the following season as left-back but was replaced by Evans three games in and for four consecutive games Evans was in Shankly's team. Evans couldn't have had a better man to learn from than the great Shankly whom, when Evans first started as a player used to get changed alongside. "Bill and you never had a conversation with him, he just made statements and threw facts at you," Evans said. Black was black and white was white with him. I don't mean he wasn't friendly because he was, he was very friendly towards the younger players, but really you just listened to him. He was so enthusiastic about the game. He would say it's a great day today even if it was raining but you knew what he meant. It meant we were about to play football!" When Shankly decided to experiment with winger Alec Lindsay as a left-back against Newcastle on 12 September 1970 Evans was well and truly out of the first-team picture except for two appearances later on in the season. Evans made no first-team appearances in 1971/72 and 1972/73 and featured for Philadelphia Atoms in USA in the summer of 1973 before playing twice for Liverpool in December in what turned out to be his final season as a player.

Bob Paisley who had just taken over from Shankly offered the 25-year-old somewhat surprisingly a golden opportunity to join the famous Boot Room by taking control of the club's reserve side. John Smith, who was Liverpool's Chairman at the time, made a prediction of Nostradamus' proportions in 1974: "We have not made an appointment for the present but for the future. One day Roy Evans will be our manager." Roy Evans didn't make a big impression on the Liverpool team as player and didn't deliver the title as manager but remains truly one of Liverpool's greatest servants as part of the legendary Boot Room.

Exclusive interview with Roy Evans for LFChistory.net from 2003.

Author of a series of excellent articles on his various Boot Room related websites (www.lfcbootroom.net), Derek Dohren has just written his first book that, appropriately, is the autobiography of the last boot-room boy Roy Evans.

Roy Evans is the youngest ever coach at only 25

Roy Evans has been appointed reserve team trainer at Liverpool Football Club. Evans is the youngest ever coach in the Football League at only 25.

Roy Evans on the Kop. 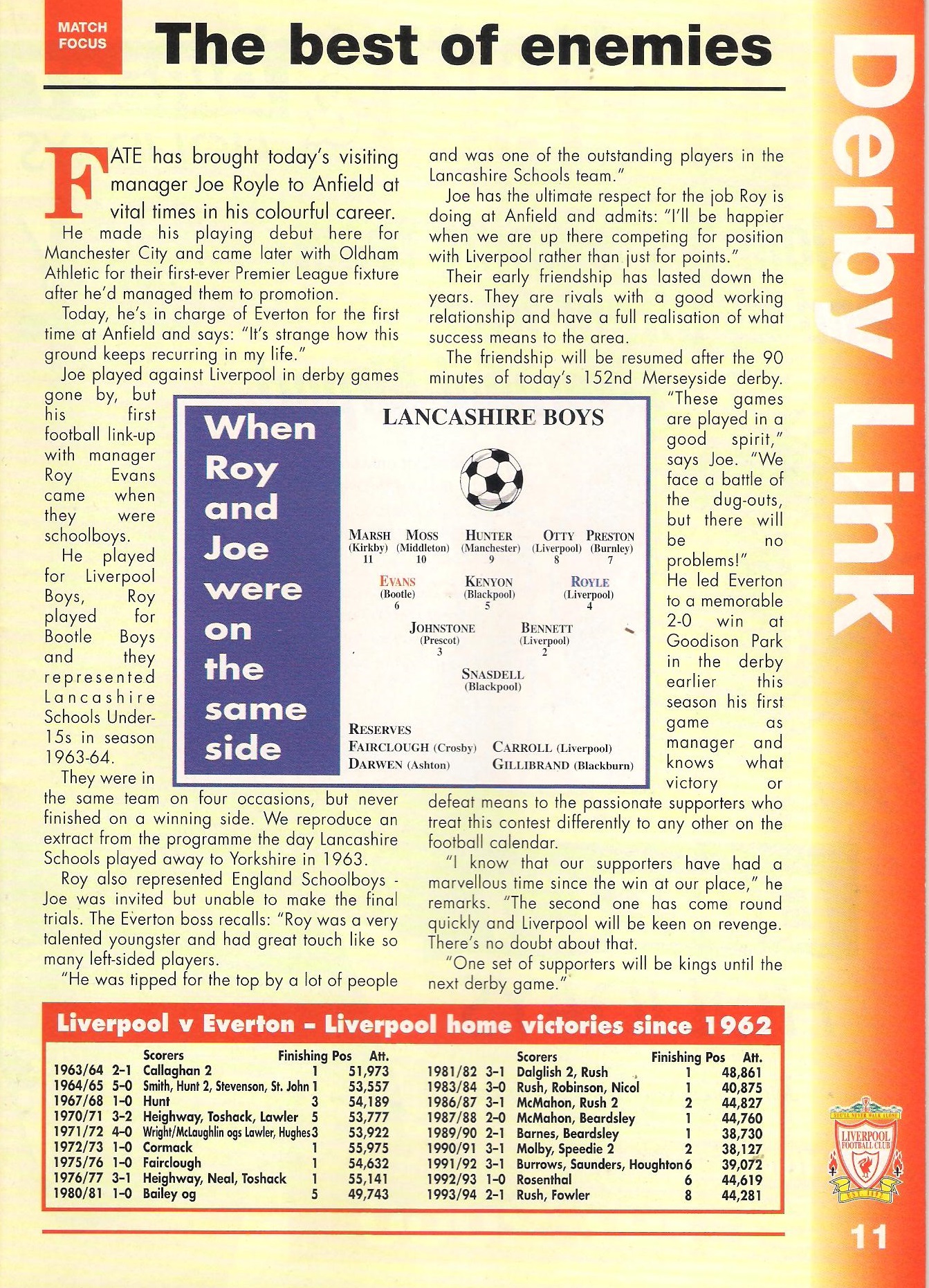 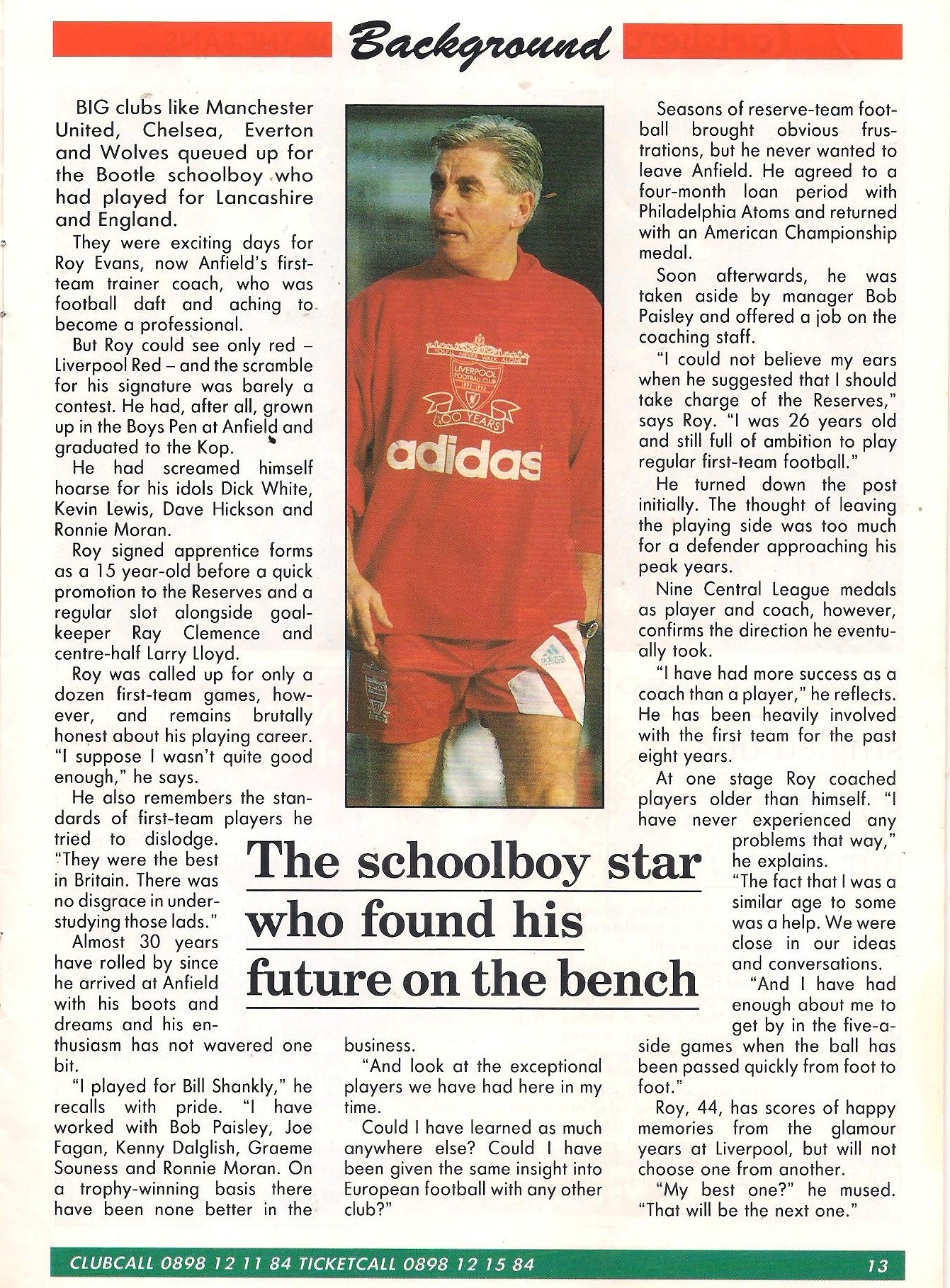