Sean Dundee has become a running joke among Liverpool supporters, considered by many as the worst-ever striker in recent times to wear the red shirt. Whether he fully deserves that title or not he arrived with a good goalscoring reputation from Germany and was so highly-rated that the Germans put pressure on him to become a citizen so he could play for their national team. Dundee startled the South African coach by pulling out of a friendly against Germany in December 1995 literally minutes before kick-off. Then he snubbed the country of his birth to play in the African Nations Cup which the Springboks went on to win. Once he did become a German citizen, however, he never played for the Germans. Dundee's last season in the Bundesliga before joining Roy Evans' troops was disappointing as he struggled in front of goal and Karlsruher were relegated. In two seasons prior to that he scored a respectable tally of 33 goals in 61 Bundesliga games.

Dundee's form at Liverpool was shocking to many and he was already linked with a move to Auxerre in September, only three months after his arrival. He injured his knee in November and while recovering, Houllier, who was now in sole charge of the team with Evans departed, told reporters he was waiting for Dundee to make a quick exit: "He knows there is no future for him at this club. Strasbourg have shown great interest in him, and I've told him it would be a great boost for his career to be playing somewhere, because he's behind Robbie Fowler, Michael Owen and Karl-Heinz Riedle." Dundee was upset when he left Liverpool after only 13 months: "I feel very harshly treated. It seems that from day one Houllier never liked me. When I joined the club I thought it was a dream move and I was determined to be a success," Dundee said. "But even when there were only two strikers fit - myself and Karl-Heinz Riedle - I never got a look-in. I tried to speak to the manager but I'm not sure he wanted to speak to me. I never wanted to leave Liverpool. I had a lot of fun, the players are a great bunch and I love the city. But the final straw came when I was told to report back for pre-season training three days later than everyone else. Then it turned out all the other players were leaving on a club trip. Myself and Paul Ince were left to train alone. We tried to keep up our spirits but it can be hard in those circumstances. I was being pushed out without doing anything wrong. I just can't understand it." Five substitute appearances for the first team was all Dundee could pride himself on in 14 months at Anfield but give him credit... he did score three goals in 12 games for the reserves!

Roy Evans was certainly not a big fan of Dundee as he told LFChistory.net. "One player I do regret signing was Sean Dundee, he was terrible on and off the pitch. He didn't take any notice of me, did what he wanted and lacked discipline. He certainly shouldn't have joined Liverpool." 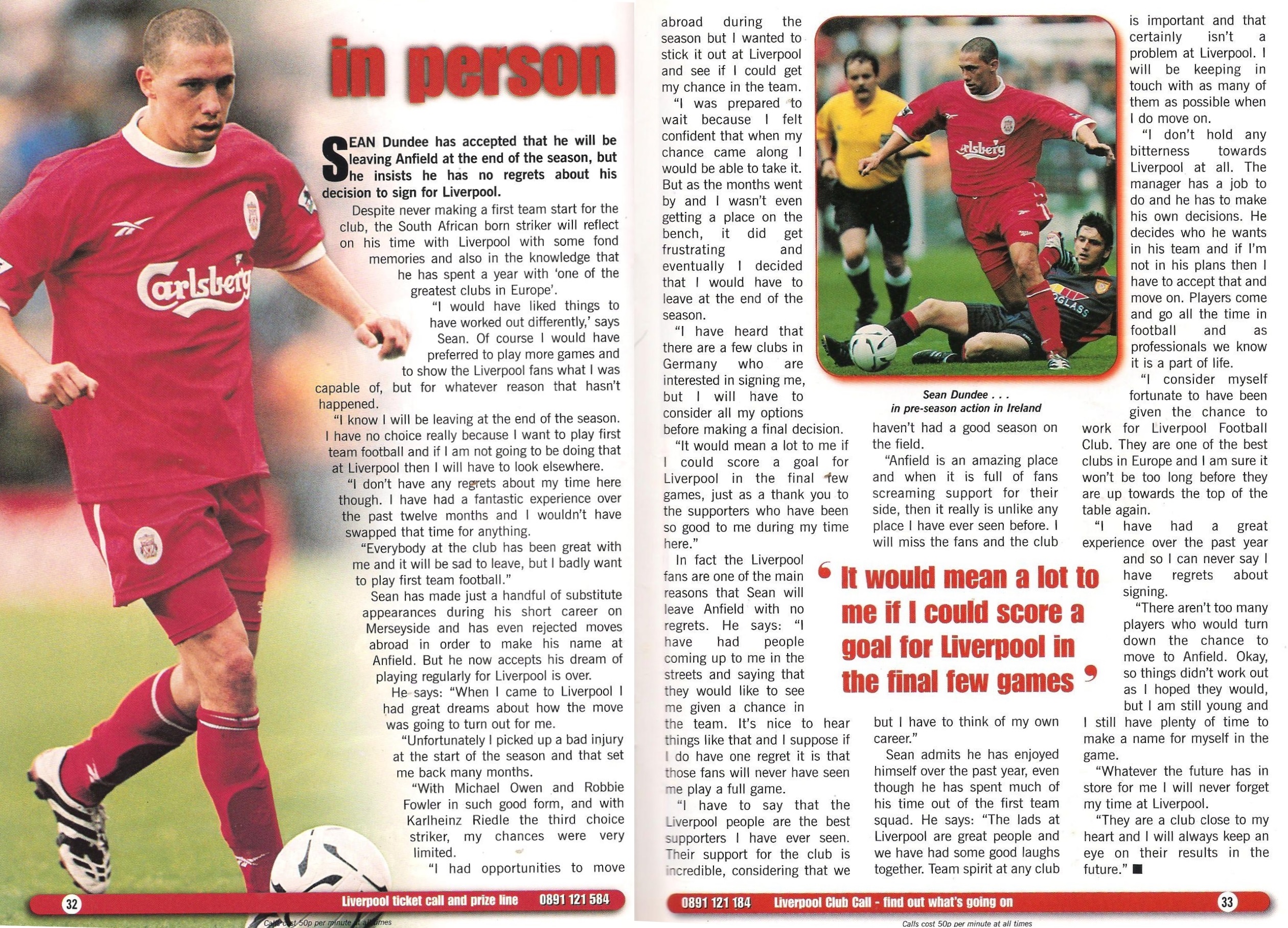