Babbel arrived at Anfield in June 2000 as one of the most decorated players in German football history. Two spells with Bayern München saw him win the German championship four times as well as achieving considerable success with the Bavarians in cup competitions; two German cups, three German League cups as well as the UEFA Cup in 1996. He was also a member of his country's European championship-winning team when the tournament was held in England in 1996. Babbel rejected a chance to join Real Madrid to come to Anfield. Bayern had accepted Real's bid for him but Babbel had already given Liverpool his word that he would join the Reds. He became an important part of a solid defence in the club's treble cup success of 2001 as well as being an attacking threat. His energetic runs down the right side and his massive experience shone through when he played in 60 out of 63 matches

er a regular scorer nor expected to be, his most important goal in Liverpool colours was the opener in Dortmund when the Reds beat Alaves to win the 2001 UEFA Cup, presenting Babbel with his second winners' medal in the competition. Michael Owen was impressed by Babbel's footwork off the field: "He’s quite a nifty mover off the field as well. At our victory party after the Worthington Cup Final against Birmingham, he was the first on the dance floor and the last to leave it." Liverpool didn't have to worry about the right-back position for the next couple of years, but then life changed drastically for the German. He was taken off at half-time in Liverpool's matches against West Ham on 18 August 2001 and at Bolton nine days later, completely out of breath. Babbel was diagnosed with the debilitating and paralysing Guillan-Barre syndrome that has destroyed many a top sportsman's . The German refused to give up in the face of such adversity and showed extraordinary courage and determination to return only 15 months after being diagnosed with the terrible illness that had left him in a wheelchair.

Babbel started four games out of five for the first team from the middle of November to early December 2002 trying to regain his former strength and fitness. A debacle of in the League Cup against Aston Villa on 18 December when he removed his shirt in disgust after being substituted in the thirty-ninth minute for Jamie Carragher proved to be Babbel's last performance for the first team. Surprisingly Babbel, who had been a model professional his whole career, ignited Houllier's anger by showing a lack of discipline in reserve matches, twice being sent off, against Sheffield Wednesday in February and Everton in May 2003 after headbutting young Blues' player, Michael Symes. It must have been a frustrating time for Babbel who had clearly not regained his stamina levels by any means. Babbel played 25 games on loan for Graeme Souness’s Blackburn in the 2003/04 season and then left permanently for Stuttgart in his native Germany in the summer of 2004. Even though by now in his early thirties, Babbel showed that he was still capable of playing at a high level; and in 2007 he helped Stuttgart to their first German championship for fifteen years. Accepting that his playing days were over, Babbel became coach at Stuttgart and in November 2008 he was promoted to the mid-table club’s coach. Stuttgart finished the season third and qualified for the Champions League. Despite progressing to the last 16 in Europe’s premier competition Stuttgart doing abysmally in the league and only thirteen months after being appointed he was sacked.

Just over five months after leaving Stuttgart, Babbel was appointed as coach of Hertha Berlin and given the immediate task of returning his new club to the top division in Germany after finishing bottom of the Bundesliga at the end of the 2009/10 season, taking just 24 points from 34 matches. Hertha returned to the Bundesliga as champions, winning 23 of their 34 matches and averaging slightly more than two goals per game as they clinched the title by nine points from FC Augsburg. Again he didn’t survive a second season and was sacked with immediate effect in December 2011, the next day after he had announced he would not extend his contract beyond the end of the season. The club’s general manager, Michael Preetz, was unhappy with the timing of Babbel’s announcement and felt his position had been compromised. Babbel insisted he had informed Preetz of his decision to leave at the beginning of November. On 10 February 2012 Babbel signed a two-and-a-half-year contract to become Hoffenheim’s coach in the Bundesliga. His new club finished the season in a respectable eleventh place out of eighteen. When Hoffenheim third from bottom in the Bundesliga in December 2012 Babbel was sacked. In October 2014 Babbel was appointed manager of the Swiss League side Luzern, guiding them away from relegation danger to a fifth-place finish.

Babbel led Luzern to top half finishes in the next two seasons but was then relieved of his managerial duties in January 2018. The following May he was named head coach of side Western Sydney Wanderers in May 2018.

An article by uefa.com on Markus Babbel.

Why Houllier's happy at snapping up star Babbel

An article from Liverpool Daily Post on 18th January 2000.

Liverpool's summer signings in the 2000/2001 season raised more than a few eyebrows.

Babbel reveals his fear at being paralysed after contracting the nervous system virus Guillan-Barre Syndrome.

"As a kid, I was always watching Liverpool on television in the great times of the Eighties. So I was very honoured when I got an offer from them and I didn`t have to think much about it, I just signed.

It was always a dream for me to play in England. I never thought about Spain or Italy. It was mainly the tremendous atmosphere I wanted to experience. I had a taste of it in Euro `96 when I was over here with Germany, and the German players who have played in England always came back and told us amazing stories about the crowds and the buzz you get in the stadiums."

"I doubt he will play for us again because I gave him many chances and it hasn't worked out. The staff have been disappointed with Markus' attitude towards the club and the fans.

It is not only the outburst during the Worthington Cup, but he has been sent off twice in the reserves. I took no action after the first incident but I will fine him two weeks' wages for the incident last week, which was unacceptable. He is no longer in my plans.

When you have talent there is no question you are capable of doing well for your club, but the motivation has to be there too. The attitude has to be right and in this case it has not been right. I think the club has been very fair to Markus. We stood by him and handed him a new contract. I'm very disappointed with him."

"His command of English has come on in leaps and bounds since he joined us. He’s quite a nifty mover off the field as well. At our victory party after the Worthington Cup Final against Birmingham, he was the first on the dance floor and the last to leave it."

"Markus Babbel's contribution needs to be highlighted. He had a difficult time at first as all foreign players do, but that only lasted for two or three games and since then he's been very steady. The players all love him here. He has proved a tremendous asset and he is a tremendous winner."

"Markus is an extremely popular person in the dressing room and the lads were delighted to see him back."

Phil Thompson in March 2002 when Babbel returned to full training after his sickness.

"The first season was unbelievable. Out of the 63 games we played I was involved in 60 of them and we won three trophies. The FA Cup final against Arsenal was particularly special and the UEFA Cup against Alaves, which we won 5-4, was an amazing game." 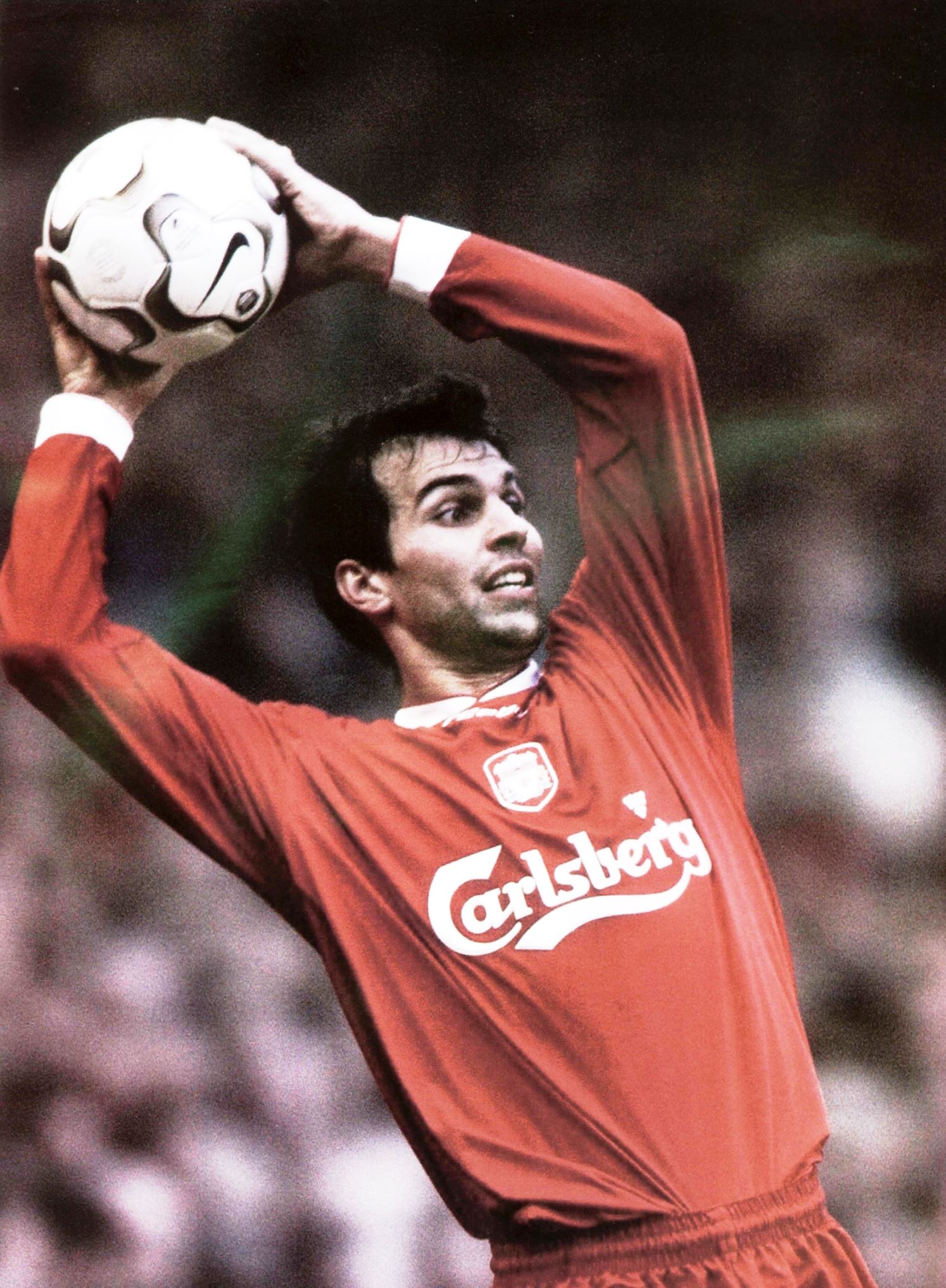