Arrowsmith was described as a born goalscorer by Shankly but was dreadfully unlucky with injuries. Arrowsmith arrived at Anfield as a fresh-faced 17-year-old in August 1960 having scored a massive 96 goals for Derbyshire club Tintwistle Villa in the 1959/60 season, a club record that has never been broken. He had just been four months at Ashton United and scored nine goals in seven matches when Liverpool made their move.

A year after his arrival his name was on everybody's lips at Anfield because the lad scored no less than 81 goals from 1961-1963 for the reserves. His breakthrough into the first team arrived in the latter part of the Championship 1963/64 season when he scored 19 goals in 24 games. Hunt, St John and Arrowsmith contributed a massive 67 League goals that season as Liverpool powered to their first League title for 17 years. The future looked bright for Arrowsmith but then tragedy struck. He injured his left knee badly in the 1964 Charity Shield that in fact inspired Liverpool’s first recorded substitution. Arrowsmith missed most of the season and only made a further 13 starts plus six as a substitute over the next three seasons.

Arrowsmith moved to Bury in 1968 and spent two years there before making the short move to Rochdale. His last season in the game was with non-league Macclesfield in 1972-73.

Daughter Julie, one of his three daughters, said after Alf's passing in 2005: “He lived life to the full, he had lots of energy and made a lot of people smile. Apart from my mum and us three, there was only one love of his life - it was Liverpool Football Club until the day he died."

"Oh yes, I was out of the game for 18 months. It was against West Ham and we had only been on the park for about 10 minutes. I called for the ball, lost it and went to challenge the bloke. I turned around and my studs stuck and I went straight around. I got up and Bob came on and put something on it and I came back on again, put my foot down and I was down again.

They took me up to Walton hospital and then they hadn't got the equipment that they have now and the X-ray showed that I had broken no bones. I waited 5-6 weeks and the cartilage popped out in training one Friday morning. It was never the same again and it was always at the back of my mind. It was the cruciate ligament that I'd done. Nowadays you have some surgery and are back in no time but not in them days. I was still scoring goals in the reserves but it was never the same, I didn't have the confidence. I could still hit the ball as hard, but it was the twisting and turning."

He lived life to the full, he had lots of energy and made a lot of people smile. He left here to go to Liverpool but he always called Glossop 'God's country' and he'll be remembered by a lot of people. Apart from my mum and us three there was only one love of his life - it was Liverpool Football Club until the day he died. We like to think he's up there with Bill Shankly and Bob Paisley picking the team and spurring them on. 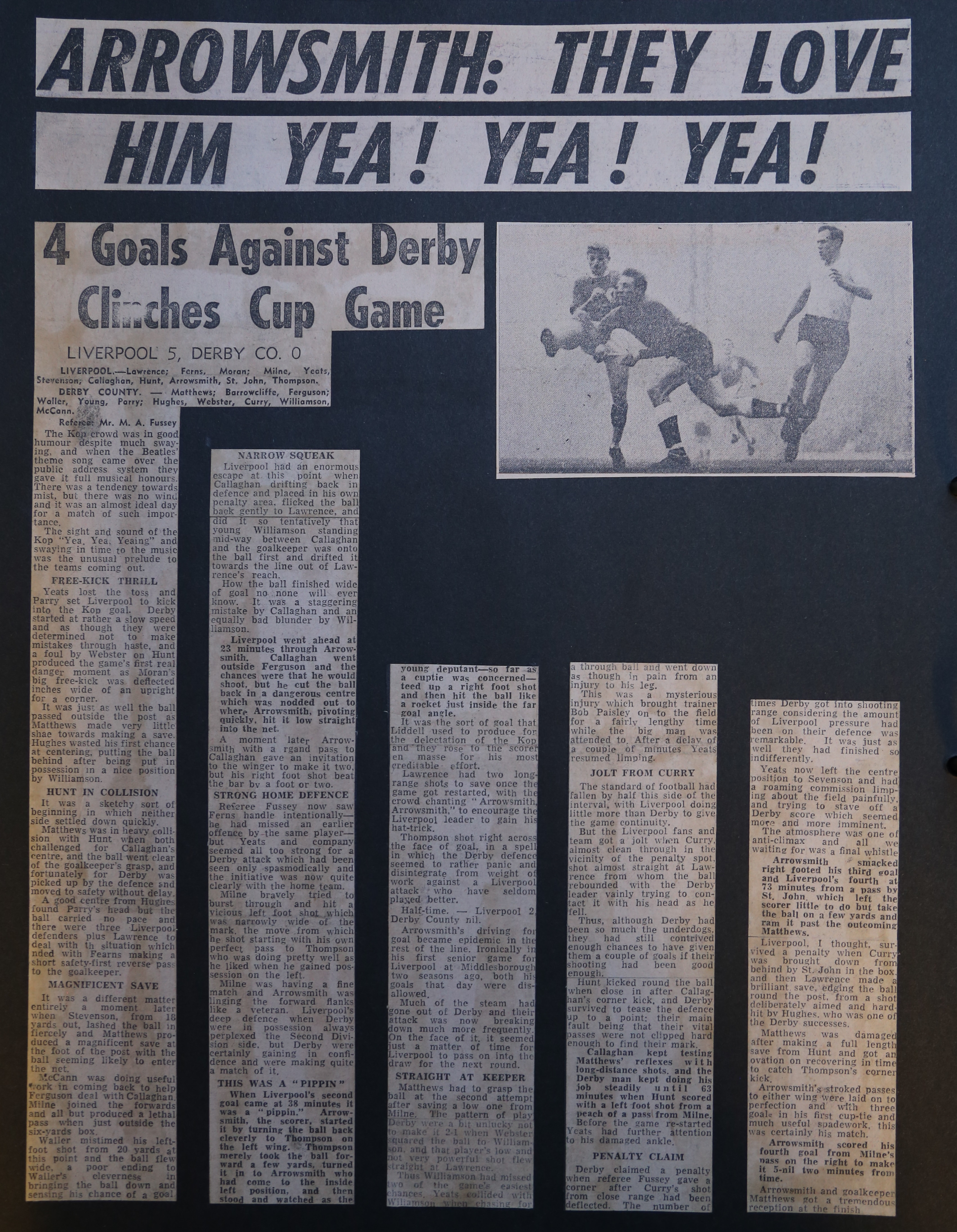 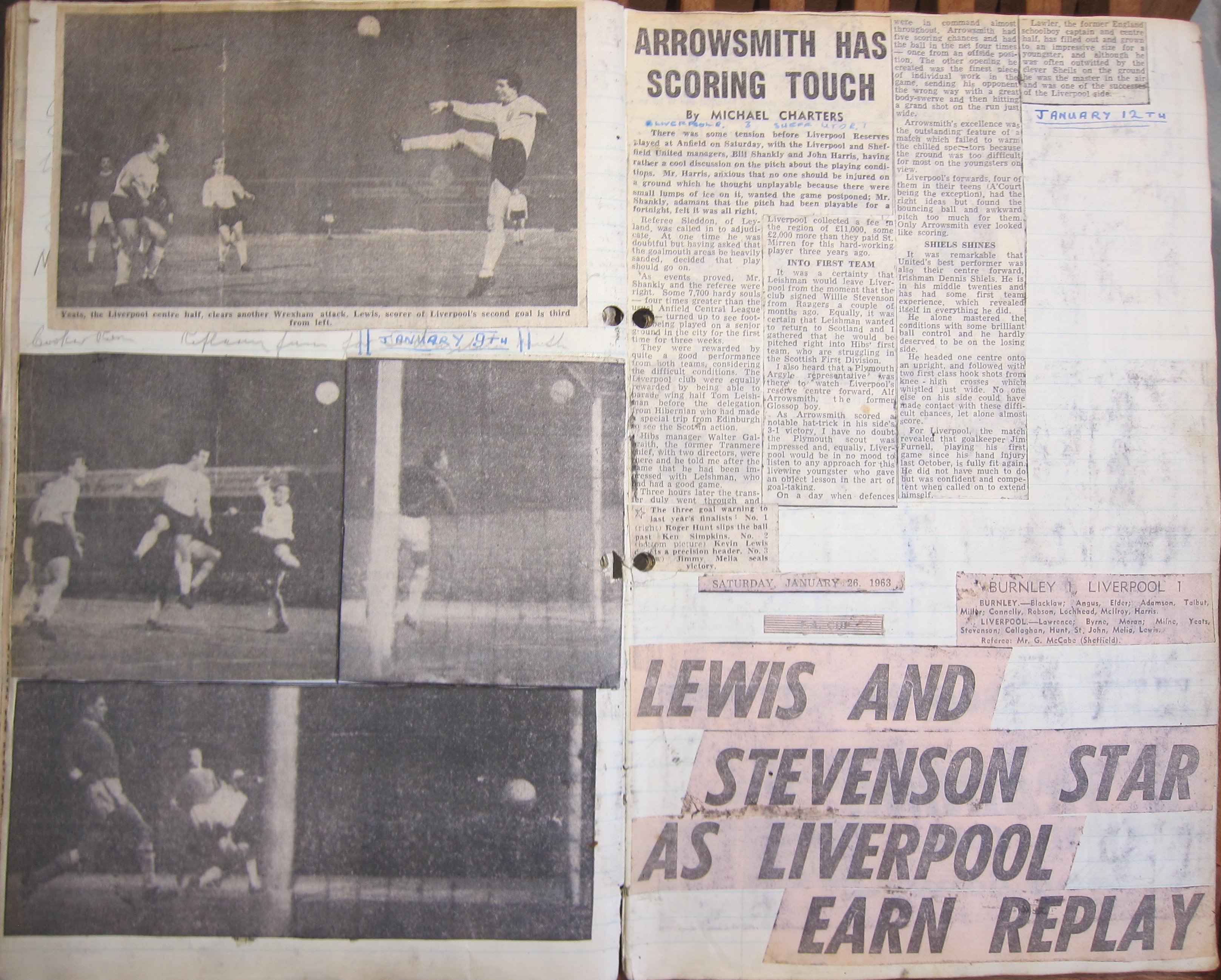 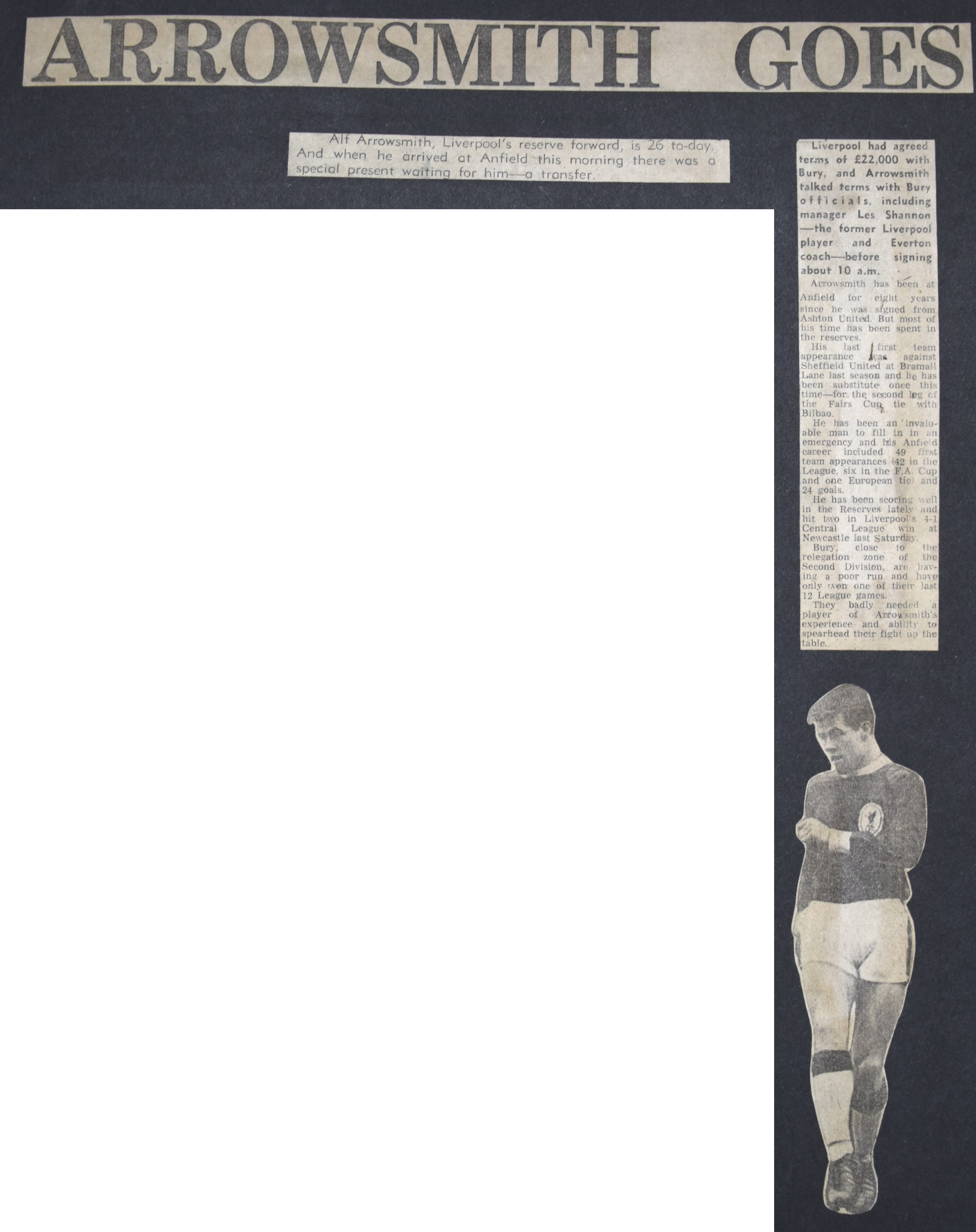 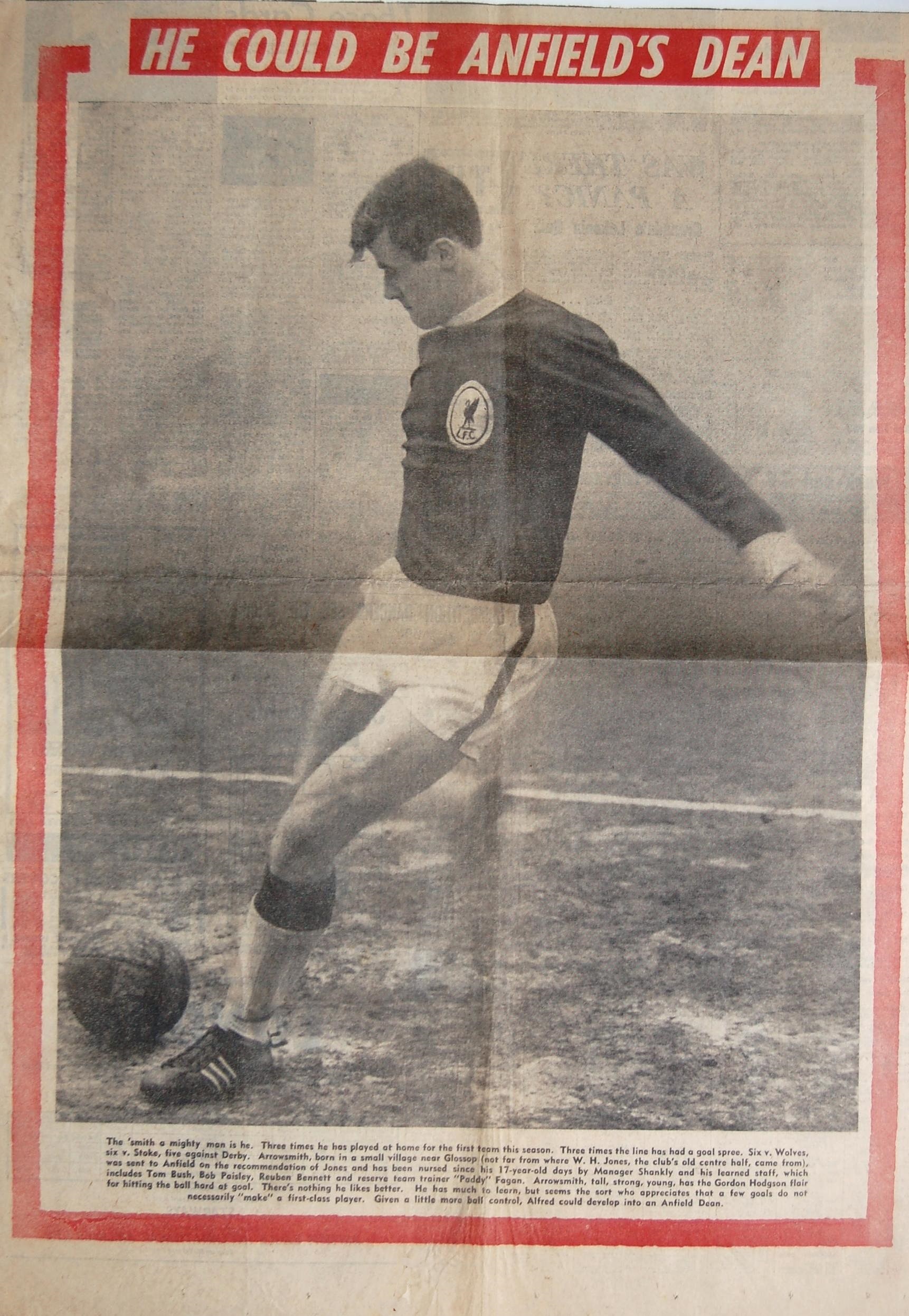 Arrowsmith on the cover of the Liverpool Echo in January 1964 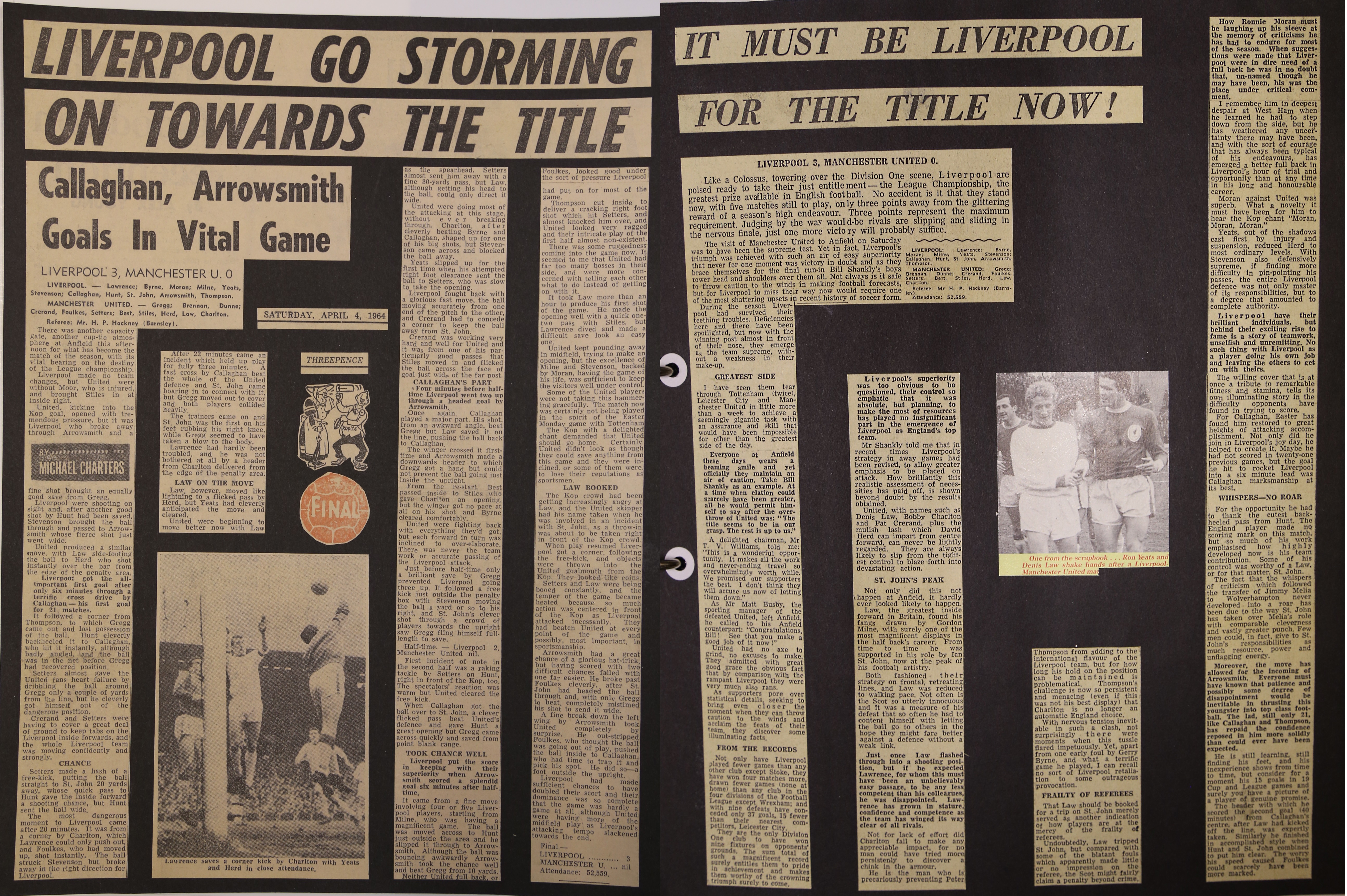 It must be Liverpool for the title now! 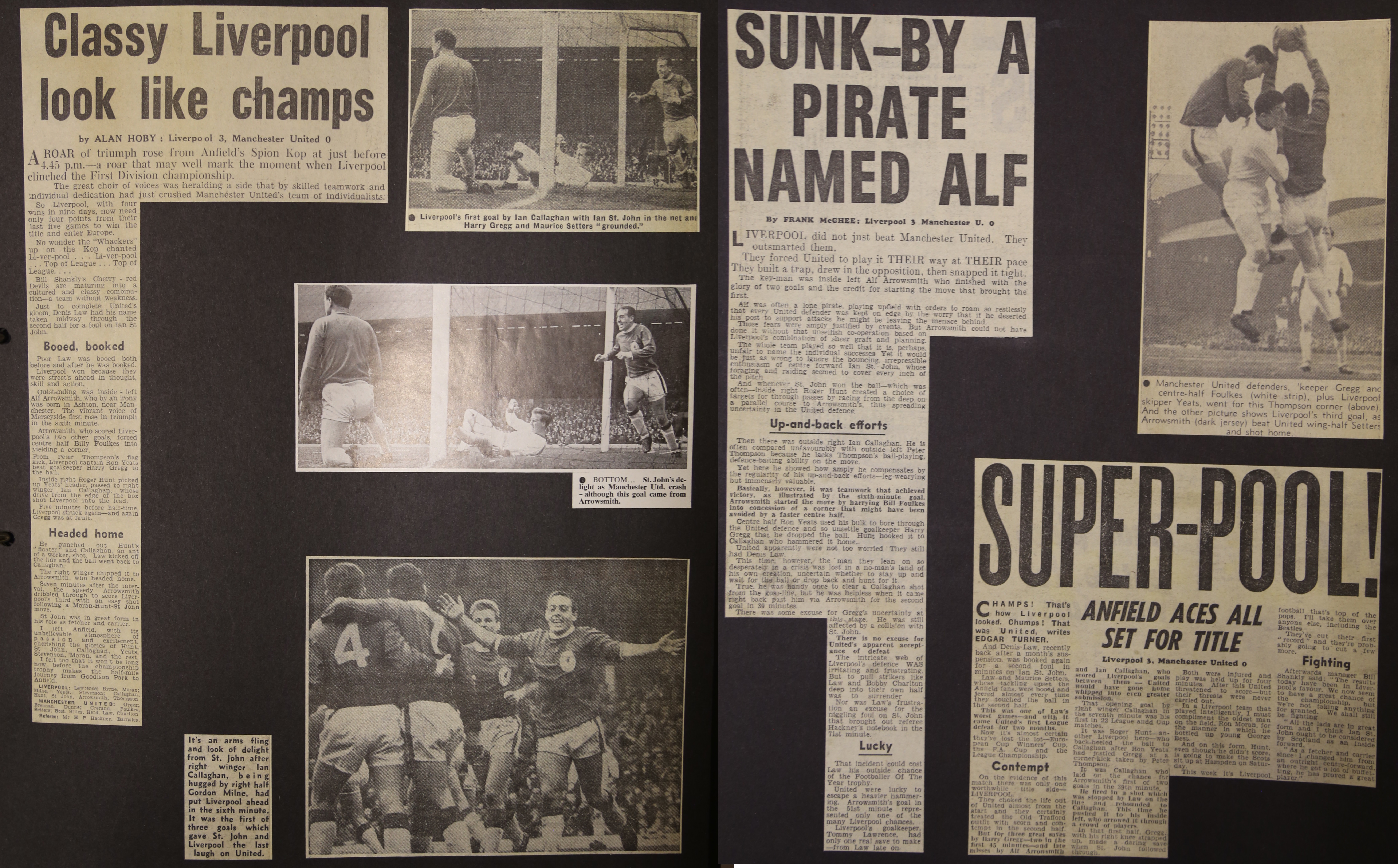 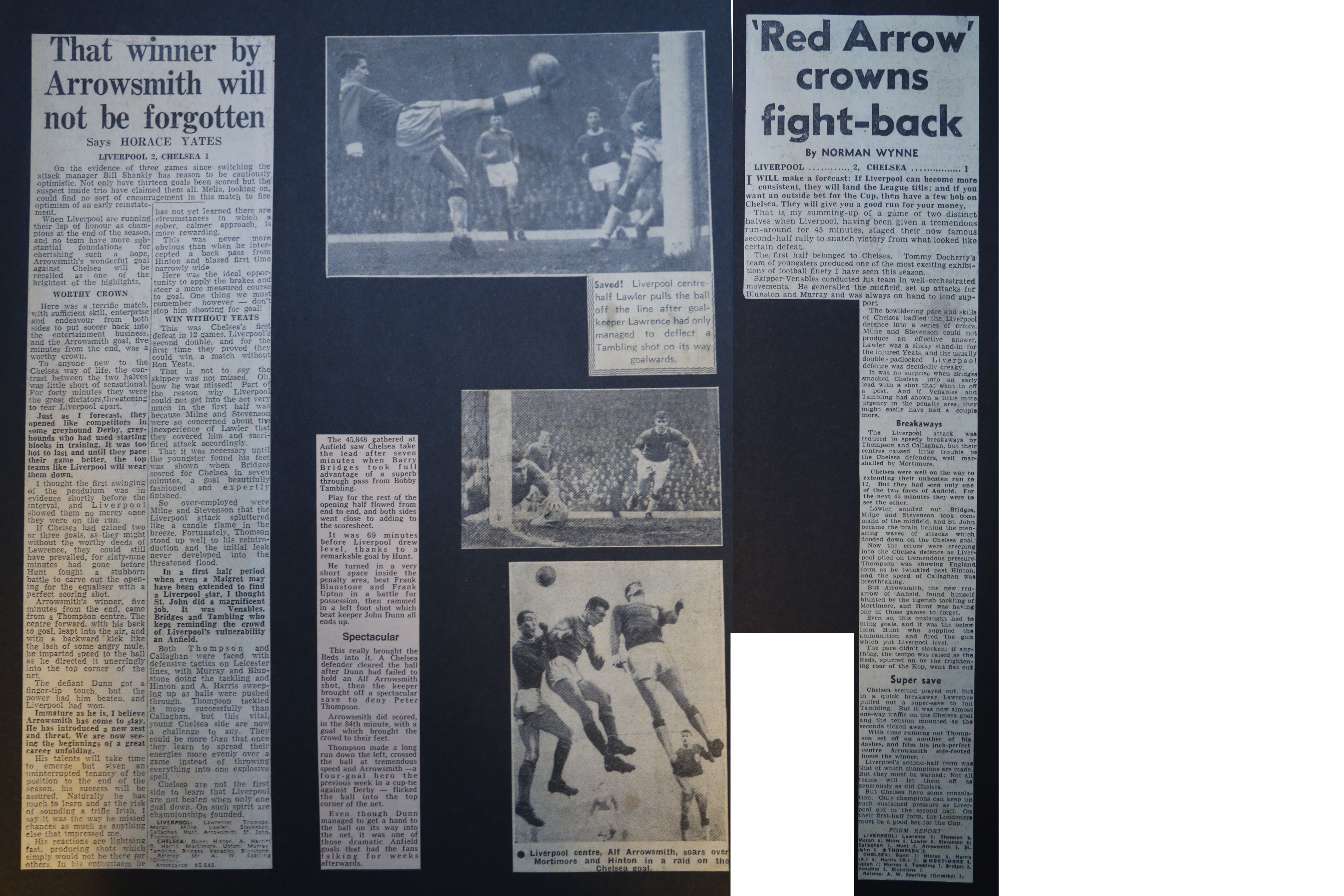 That winner by Arrowsmith will not be forgotten - 11 January 1964 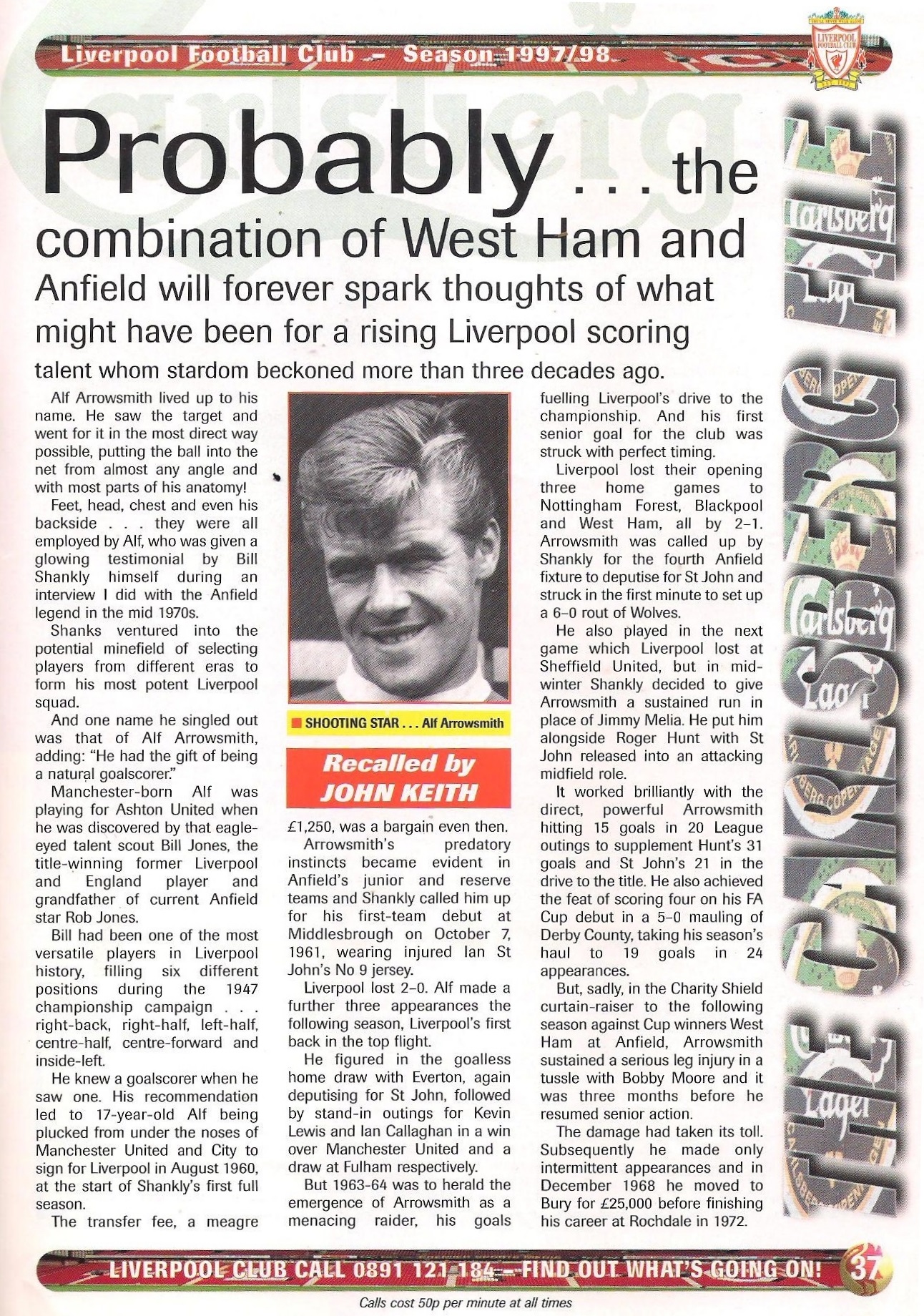 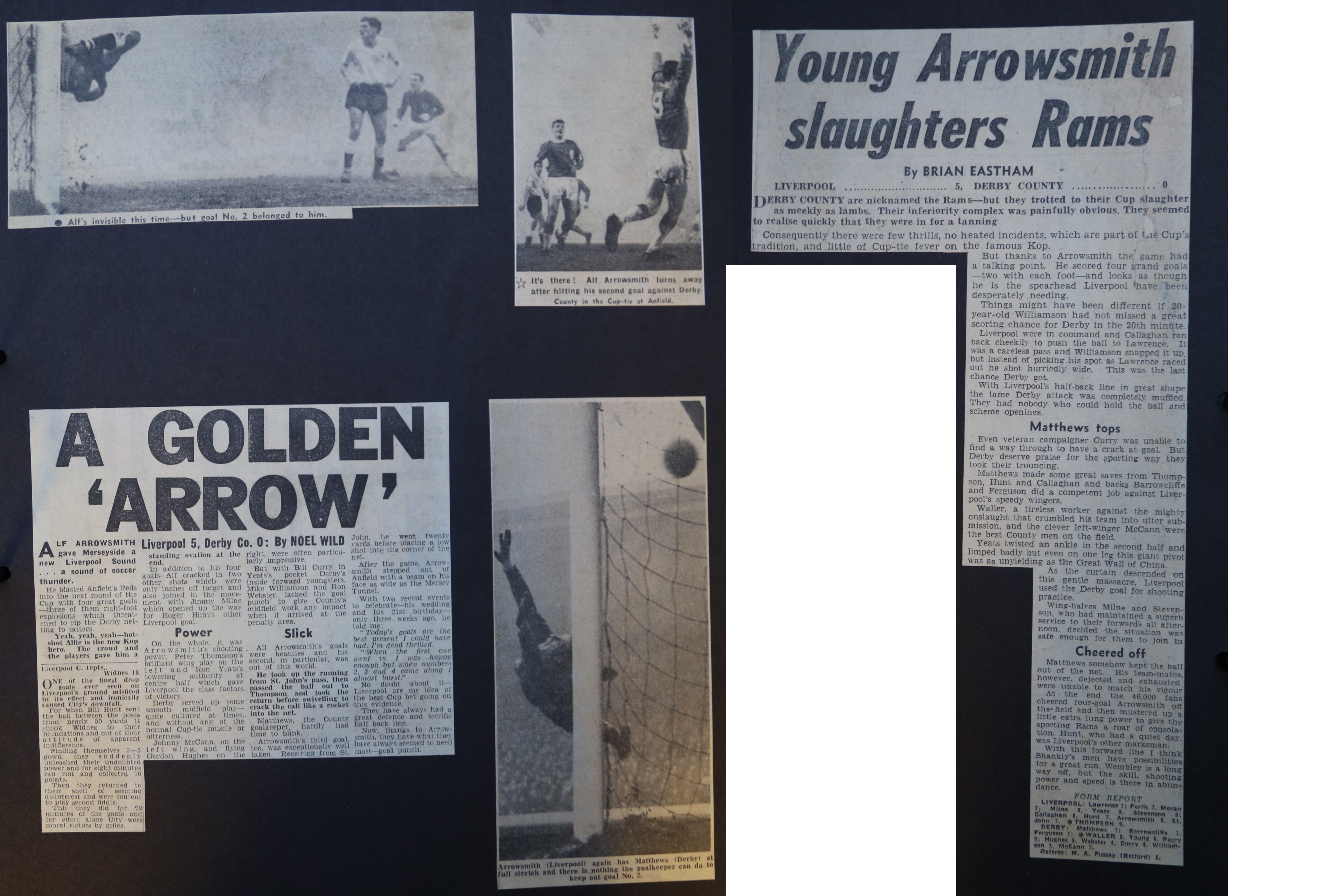