Virgil Van Dijk was born to a Dutch father and Surinamese mother in Breda, starting his youth football career with Willem II and then Groningen, making his full debut in May 2011. During his time at Groningen, he played in the Europa League and moved to Celtic in June 2013. He had a shaky start with them after breaking his foot in pre-season but went on to become a regular for the next two seasons, scoring fifteen goals in 115 games. However, after Celtic were eliminated from the Champions League qualifiers in the summer of 2015 he sought a fresh challenge and joined Southampton on transfer deadline day in a £13 million deal. He missed only eleven minutes of action in his first season at St Mary's and made his Holland debut in October 2016.

In January 2017 Van Dijk was named club skipper but then suffered an ankle injury ruling him out for the rest of the season. During the close season in 2017, Liverpool linked to Van Dijk who expressed a desire to move on, but in a dramatic development, the club issued a statement ending any interest in him, amid claims Southampton might be reporting them for false approaches. Strong, fast and a good organiser, Van Dijk was a reported target for several clubs but Southampton refused to sell him during that transfer window. Rather than sign an alternative, Liverpool remained patient and on 28 December it was announced that a £75 million fee had been agreed for him to join on 2 January. It was a world-record fee for a defender and Van Dijk became the most expensive player in Liverpool's history. The first instalment of that was paid on his debut, when he headed a late winner against Everton in the FA Cup third round on 5 January. As the second half of the season went on, his calming and assuring presence was a major factor in Liverpool reaching the Champions League final. It was not just his ability, but his organisational skills that were crucial and by the summer, there were very few who thought the fee had been excessive, even claiming he was a bargain.

During 2018/19 Van Dijk surpassed the performances of his first half-season at Anfield. He started every Premier League game, being substituted just once and in the Champions League missed just one game through suspension. He got his first league goal at Wolves in December and scored the crucial second goal as Liverpool beat Bayern Munich 3-1 in the Allianz Arena in the Champions League round of sixteen. By then, fans were paying homage to him every game with a catchy song to the tune of "Dirty Old Town". Van Dijk was deservedly named the PFA Player of the Year, having a helping hand in 21 clean sheets from 38 league games, as well as maintaining the unbelievable statistic of not being dribbled past all season. As a recognition of his and Liverpool's exploits in the Champions League, Van Dijk beat Cristiano Ronaldo and Lionel Messi to be voted UEFA Men's Player of the year for 2019, receiving 305 points compared to 207 for Messi and 74 for Ronaldo. He is the first defender to receive this honour since it was first presented to Messi in 2011. Incredibly Van Dijk was only eight points (679) away from beating Messi (686) to the Ballon d'Or in 2019, becoming only the twelfth defender to make it into top 3. Incidentally, following Cristiano Ronaldo who was third in the vote with 476 votes, Van Dijk's teammates: Sadio Mané (347) and Mohamed Salah (178).


Van Dijk's signing for Liverpool has been a true watershed for the club that has lifted every single player who features alongside him. Alan Hansen who is arguably considered the greatest ever defender in Liverpool's history was famously a nervous wreck before matches but the Dutchman couldn't be more different: “I’m never nervous any more," Van Dijk revealed in May 2019. "With experience the nervousness is not there. When I made my debut for Liverpool against Everton, I was more excited than nervous. I surprised myself that day with my calm. If you’re nervous you think: ‘I don’t want to make mistakes or give the ball away.’ But you limit your own qualities then. Over the years I’ve developed the mindset that there are many more important things in life.”
Van Dijk's composure is for all to see and he led Liverpool in yet another remarkable season when the 30-year wait for the league crown came to an end. He was the only Liverpool player who played every single minute in the 2019/20 league campaign. When asked who is the Premiership's greatest ever centre-half, former Manchester City captain, Vincent Kompany was in no doubt. “I would bring it back to Virgil van Dijk,” Kompany said in May 2020. “It’s a weird one because he hasn’t been on the scene as long as these names we have mentioned: John Terry, Rio Ferdinand. These guys were there for a long time. But the signs he has showed in his last few years just make it so obvious that if he would have been at the top level before that he would have already gone further as well. From what I’ve seen in terms of having an impact on a team, and a defender is never about himself it’s about communication with other guys and how you make your team more solid. The Liverpool before van Dijk and the one after him, it’s a completely different setup and I’ll give him that one because of that."

Five games into 2020/21, Van Dijk suffered a cruciate ligament injury in his right knee after a challenge by Everton's Jordan Pickford. He was rued out for the rest of the season and chose not to risk his come back by making himself available for Euro 2020, held over from the previous summer due to Covid 19. Van Dijk returned to the centre of Liverpool's defence for the start of 2021/22.

This feature originally appeared in the January 2019 issue of FourFourTwo.

This feature originally appeared in the FourFourTwo magazine - written by Andrew Murray and published on 29 April 2019.

By James Pearce in the Liverpool Echo on Arsenal - Liverpool on 3 NOV 2018.

“Virgil van Dijk is the best centre-back Liverpool have had since Alan Hansen, but the 26-year-old Holland international is better in the air than Alan was. There’s an argument that signing him for £75m from Southampton and selling Philippe Coutinho to Barcelona for £142m has already made Jurgen Klopp’s side stronger. Van Dijk will make them more solid. I believed he would come down from Celtic and would be too casual and get caught out in England, but he’s made it look easy, the same way he did in Scotland. That’s a mark of how good he is. He’s never extended, never seems to be running flat out in a race with somebody, never seems to be using all his strength when nudging somebody off the ball and never seems to be under pressure when making passes. He always plays within himself, which is a great sign. He has always got another yard or gear to find, and that’s why he reminds me of Alan.”

Souness on Van Dijk in October 2018

“Van Dijk does not take up positions. He marks territories. Molineux is the latest venue for Liverpool’s centre-back to plant his victory flag, in doing so demonstrating why Jurgen Klopp can succeed where the club’s other recent title pacesetters failed. Many will look to Van Dijk’s goal against Wolves, Liverpool’s second,but it was the nonchalant shrug on Adama Traore early in the second half that typified his excellence, the striker’s whippet pace nullified with ease. Attackers need a Satnav to find a way past Van Dijk. His headed clearances have become so routine they are barely noted. He has become a £75 million bargain."

Chris Bascombe in The Telegraph wrote in December 2018

Van Dijk inspired Liverpool to victory against Bayern Munich on 13 March 2019 in the Champions League. The £75m defender had Liverpool's hierarchy playing with superlatives. Co-owner John W. Henry tweeted "75 per cent of the earth is covered by water, the rest by Van Dijk." Klopp was equally complimentary in his press conference: "You could write a book about his skills, his strengths, how much I like him, what a fantastic person he is," Klopp said after the game. "He's so young, already so mature, so strong, all good."

"Beast of a player, beast of a man, my goodness what a player."

“The manner and style of play of Virgil van Dijk amazes me. He’s a player who has amazed me since I saw him at Liverpool and with the Netherlands national team. He exudes quite impressive power and self-confidence. He imposes it at all levels. I see absolutely no fault in him. At first glance, you might get the feeling that because of his large size, he lacks mobility and flexibility, but that’s not the case at all. He has an exceptional sense of anticipation, and he is very agile. I love this player.“

Franz Beckenbauer on Van Dijk in France Football in December 2020: May 2015 - Doubts about his ability in Scotland 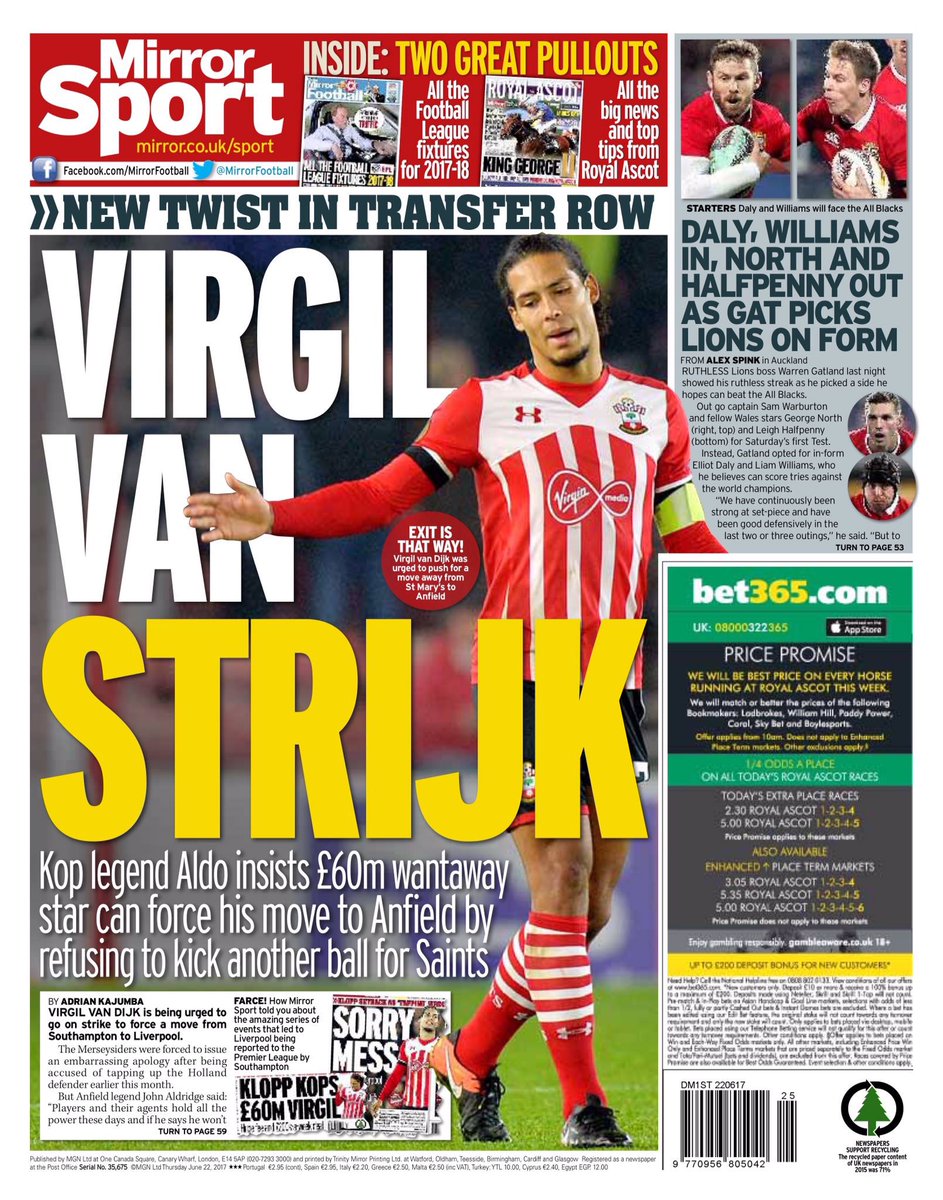