The meeting of Cup “giants” can either thrill or disappoint the football pundits who prefer practice to be as near copy-book theory as possible. The actual rabid partisans is not so conservative ; for him the result is the be all and end all of the tie, and if it is in favour of the wearer of his colours – so much the better. The latter viewpoint was in the majority at Turf Moor on Saturday, when Burnley reached the sixth round of the FA Cup in a game which was noted more for its hard and heavy exchanges than its demonstration of the arts and crafts of football.

But those who attended expecting to watch a match to remember had only themselves to blame. The nearest approach to a first-grade encounter between two teams was the Ewood Park semi-final of 1947.

A meeting between Burnley and Liverpool does not lend itself to the higher lights of the game. The reason is obvious. The Anfielders have too many strong spoilers in their ranks, and while this is not a bad fault in a Cup fighting side it is useless without touches of football skill with which to lift the stopper tactics above normal level and help to beat the opposition by combined cunning.

I forecast that the match would be no classic. Each team was bound to play “smothering” tactics; Burnley to nullify the Liddell menace; Liverpool to prevent the Burnley inside-forward and wing half combination from making use of open play.

Therefore, I for one, was not disappointed. Each team was out to win, naturally, and their primary object was to stop the opposition from putting the ball in the net. Hence the display of vigorous dispossession, the terrific tackling, and the general nullification of intended moves, many of which broke down in midfield.

Neither side have the other time to settle on the ball. There were no half-measures, no quarter asked or given. Liverpool would not let Burnley play football. Burnley would not give Liddell a chance to do so. Each cancelled out the other and so you had a hard, dour struggle minus trills and fancies – just a Cup-tie.

Such a match needs a firm quick thinking referee. It had one in Mr. Ling from Cambridgeshire who took the strong line with impartial and prompt jurisdiction. He allowed for the “needle” atmosphere, the Cup-spirit, and the determination of the rival defenders, but he came down hard on unnecessary rough stuff and penalised anything he saw which appeared dangerous to a player.

The fact that there were more free-kicks for infringements given to Burnley than to Liverpool is a mere indication of the hopes the Reds pinned on stopping anything approaching a Claret runaway. (In the second half alone Burnley had 11 of these free-kicks against five for their visitors).

But if the play left much to be desired what of the players? Here again there were few surprises. I thought Burnley’s defence had a few more holes than usual, probably because f the Liverpool inside forwards played deep, they took the Burnley wing-halves further away from “base.” And there was the watch on Liddell. There was no doubt about whom Burnley regarded as the man liable to upset Sixth Round appointment.

Liverpool slung the long cross ball and used the quick oblique centre after trying to draw the defence out. It said much for the anticipation of wing halves Adamson and Attwell and a great exhibition Cummings that such policy was foiled.

Adamson and Attwell did a tremendous amount of fine work particularly the latter who led with Liverpool’s captain, Paisley, for the honour of being the best wing-half on show after some preliminary work had gone astray. But the backs took more than a minor share of the credit.

The Anfielders tried the now famous Done-Liddell switch and therein made their mistake. Liddell, despite the wholehearted attention of Aird was more of a menace on the wing than in the centre. Even then had they switched more often they might have stood a chance of creating more confusion than they did.

On Saturday the switch flopped because Liddell was too well watched and attended to. Cummings was always ready in case Done hooked the ball over Aird’s head first time or for when Williams pushed the ball past Mather and made him race him

The defence covered each other quickly and tackled keenly. There were more spaces in that of the Merseysiders that the Clarets did not take more advantage particularly in the second half.

Possibly these two early goals made all the difference. The shock start certainly caused a flutter in the Anfield dove coates.

It was Billy Morris who started Liverpool’s troubles, and both Johnny Aird and Jackie Chew had a foot in it. A free kick was awarded Burnley way out towards the touchline but handy enough for a back to drop an award one on the Liverpool 18-yard line.

The Merseysiders evidently thought this was what Jock was about to do. He went to it as if a hefty kick would do the trick but instead slid the ball up the wing to Chew who was unmarked. Chew’s centre whipped across hard, Holden could not reach it properly and a rebound came to Morris who promptly shot through from close range.

Liverpool appeared to be a worried side when some of their best attacks went awry. Much of their approach play was promising, with the use of the long diagonal ball to the left-wing and the first-time centre in an effort to catch the defence napping. Done appeared to lose the sting of an early injury which caused the initial switch with Liddell.

The Burnley goal had some narrow escapes, and Done fired over after Strong had punched away one of these crosses to the forward’s feet. Then Balmer put wide and Williams did likewise.

But Burnley had their chances too. Holden, with a typical piece of chicanery, left Cadden floundering an raced away only to switch the ball weakly with Morris racing in expecting a fast centre. Each side had a goal disallowed for offside. Shannon “netting” for the Clarets and his old pal, Cyril Done, for Liverpool.

Burnley had four quick free-kicks in succession midway through the half. We had the unusual spectacle of Elliott being stretched out with a facial injury after colliding going up for a high ball!

Then with seconds ticking off for the interval (stoppages had increased the period over a minute), another right-wing free-kick, near the corner this time, brought Burnley’s second goal at the most vital period of the game. Chew swung the ball over, Shannon moved to meet it. Let him tell the story: “I got my head to it and thought Ashcroft was rather lucky to block it. Before he could get to the ball I managed to hook it past him into the net.”

Thus he scored his first goal against his old club and by this opportunist effort put his “new” one in Round Six. No wonder he received an ovation when he ran in at the interval – just after the summary eviction of four protesting Liverpool supporters by the unsympathetic police.

Liverpool had ten minutes in which to formulate any new plan in an endeavour to wipe out these arrears. If they did so there was little sign of it after the interval.
They tried hard enough on their return but despite misses by Balmer and Payne, which followed moves which found the gaps mentioned earlier. Burnley held the whip hand of two goals and a well-ordered rear-guard.

Aird and Mather won their mead (???) of applause. Cummings, Adamson, and Attwell slammed, bolted, and barred the defensive door to such effect that Liddell got in only one shot – and Strong was there to cluten (???) it. The ‘Pool attacked desperately at times but Burnley held out.

Morris and Shannon aided the foiling tactics and tried the long ball either up the wings or via the centre. Chew broke away but his express centre was just too fast for Holden and Shannon.

Burnley’s raiding proved lively if not effective, but with Liverpool fighting hard and with robust determination, there was little time for ordered approach work. Lambert backed many approaches and gave a fine display.

At one time Ashcroft was the only player in the Liverpool half. Once when the ball went out of play, the visiting trainer received it and took the opportunity to speak to Liddell as he handed it over. Whether it was a word of advice or merely encouragement we shall never know, but it brought no apparent result.

Elliott, a constant source of trouble for Liverpool, had some rare tussles with Jones, and once flashed a free-kick just past the post to raise a crowd chorus of “E-e-hs” and “O-o-hs.” Despite Lambert’s speedy opposition Chew had some useful dithers and a few runs into the middle to disconcert the ‘Pool left flank.

He had the satisfaction of playing his part in the goals. Holden suffered from Cadden’s crude stopping tactics, and seldom had the chance to show his undoubted football superiority.

And so Liverpool’s colourful raucous tide of humanity swept over Burnley one hectic Saturday and ebbed, leaving 1952 Cup hopes wrecked at Turf Moor. Liverpool had only themselves to blame – they threw their all into a stopper plan, and as a result conceded free-kicks, and the goals came from two. A brand of poetic justice?

Accommodation note: Spectators appeared packed in some parts but in enclosure there seemed room enough, a fact which caused comments from the struggling, overcrowded scribes in the Press Box. 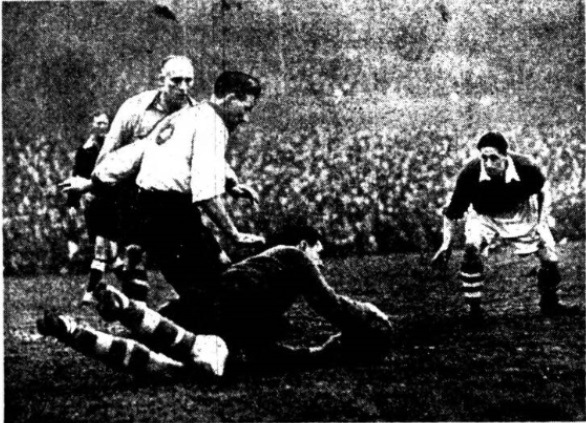 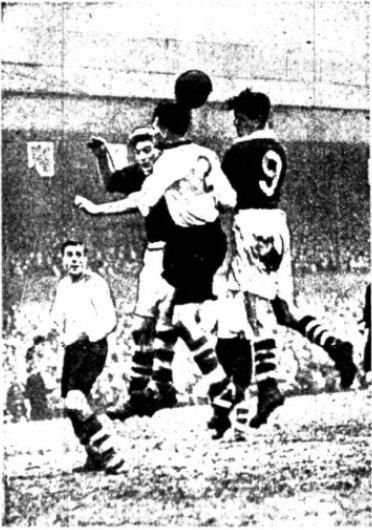