- Wooltonian is one of the most accomplished writers on the Net and in print on matters relating to Liverpool. -

No Shankly story could ever be complete without some of the man's pearls of wisdom, here are some of my favourites.

Shanks (general):
"Some people believe football is a matter of life and death, I am very disappointed with that attitude. I can assure you it is much, much more important than that.

Shanks on the Hallowed Turf:
"Just look at that grass boys, it's great grass, it's professional grass. (Always made me giggle, I wonder how many at the time added, Can it be smoked ?)

Shanks on boardroom meetings:
"At a football club, there's a holy trinity - the players, the manager and the supporters. Directors don't come into it. They are only there to sign the cheques, not to make them out. We'll do that, they just sign them.

Shanks on Tommy Smith:
"If he isn't named Footballer of the Year, football should be stopped and the men who picked any other player should be sent to the Kremlin."

Shanks (general):
"Fire in your belly comes from pride and passion in wearing the red shirt. We don't need to motivate players because each of them is responsible for the performance of the team as a whole. The status of Liverpool's players keeps them motivated."

Shanks (general):
"Football is a simple game based on the giving and taking of passes, of controlling the ball and of making yourself available to receive a pass. It is terribly simple." 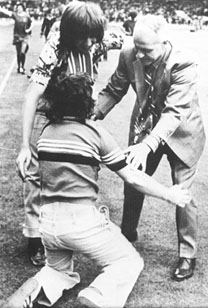 Shanks (general):
"Of course I didn't take my wife to see Rochdale as an anniversary present. It was her birthday. Would I have got married in the football season? Anyway, it was Rochdale reserves."

Shanks on offsides:
"If a player is not interfering with play or seeking to gain an advantage, then he should be."

Shanks (general):
"If Everton were playing at the bottom of the garden, I'd pull the curtains."

Shanks to Tommy Smith:
"You son, you could start a riot in a graveyard."

Shanks on the day he signed Ian St John:
"Son, you'll do well here as long as you remember two things. Don't over-eat and don't lose your accent."

Shanks to Kevin Keegan:
"Just go out and drop a few hand-grenades all over the place, son."

Shanks to Tommy Smith, who tried to explain that his bandaged knee was injured:
"Take that poof bandage off. And what do you mean about YOUR knee? It's Liverpool's knee!"

Shanks to the journalist suggesting Liverpool were in difficulties:
"Ay, here we are with problems at the top of the league."

Shanks to a translator, when being surrounded by gesticulating Italian journalists:
"Just tell them I completely disagree with everything they say!"

Shanks to a barber when asked if he wanted anything off the top:
"Aye, Everton." 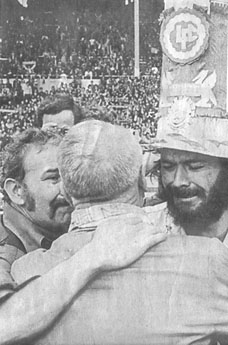 A scout told Shanks about a young player who he'd given a trial at Liverpool:
"He has football in his blood," the disappointed scout complained. "You may be right," Shanks said, "but it hasn't reached his legs yet!"

Shanks at Dixie Dean's funeral:
"I know this is a sad occasion but I think that Dixie would be amazed to know that even in death he could draw a bigger crowd than Everton can on a Saturday Afternoon."

Shanks when told he had never experienced playing in a derby:
"Nonsense! I've kicked every ball, headed out every cross. I once scored a hat-trick; One was lucky, but the others were great goals."

Shanks after beating Everton in the '71 cup semi:
"Sickness would not have kept me away from this one. If I'd been dead, I would have had them bring the casket to the ground, prop it up in the stands and cut a hole in the lid."

Shanks to a photographer who suggested Brian Clough was outspoken:
"Laddie, that man scored 200 goals in 270 matches - an incredible record - and he has won cup after cup as a manager. When he talks, pin back your ears."

Shanks (general):
"A lot of football success is in the mind. You must believe you are the best and then make sure that you are. In my time at Liverpool we always said we had the best two teams on Merseyside, Liverpool and Liverpool Reserves."

Shanks (general):
"The trouble with referees is that they know the rules, but they do not know the game."

Shanks to a reporter in the 60's:
"Yes, Roger Hunt misses a few, but he gets in the right place to miss them."

Shanks after signing Ron Yeats:
"With him in defence, we could play Arthur Askey in goal."

Shanks after a hard fought 1-1 draw:
"The best side drew."

Shanks after a 0-0 draw at Anfield:
"What can you do, playing against 11 goalposts?"

Shanks to the players after failing to sign Lou Macari:
"I only wanted him for the reserves."

Jock Stein on Shanks:
"I don't believe everything Bill tells me about his players. If they were that good, they'd not only have won the European Cup but the Ryder Cup, the Boat Race and even the Grand National!"

Shanks talking to a Liverpool trainee:
"The problem with you, son, is that all your brains are in your head."

Shanks on Ian St. John:
"He's not just the best centre-forward in the British Isles, but the only one."

Shanks on Ian Callaghan:
"He typifies everything that is good in football, and he has never changed. You could stake your life on Ian."

To Alan Ball Snr after breaking down in the Mersey Tunnel and being offered a tow:
"You've gotta be jokin, can you imagine the headlines in tomorra's Echo? "Shankly pulled out of the Mersey Tunnel by the balls" 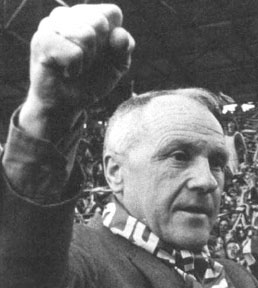 Nessie on Shanks:
"Bill always cleans the oven when Liverpool get beat, that's why we have the dirtiest oven in the League."

Shanks on his resignation:
"It was the most difficult thing in the world, when I went to tell the chairman. It was like walking to the electric chair. That's the way it felt"

My Dad on Shanks:
For a little man he's got the balls of an Elephant and the heart of a LION.

Wooly on Shanks:
I believed every word he ever uttered.
He said we were the greatest side there had ever been, and he was right.
He said he would build a Bastion of Invincibility, he did.
He said the fans are the lifeblood of the club, we are.
He said they would have to send a team from Mars to beat us, it was the only lie he ever spoke, we beat the Martians 8-0.