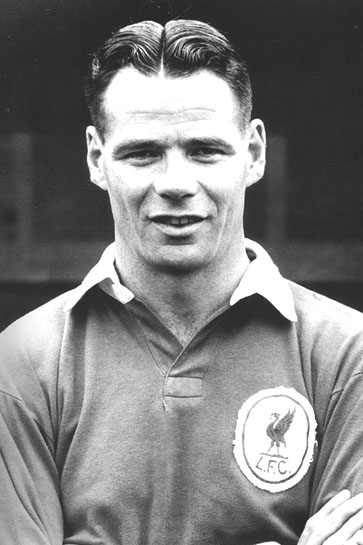 What was it that frightened defenders in the Liddell era?

Alf Ramsey and other defenders of the time will confirm it was all of the above. Ramsey once said, that playing against Billy was an absolute nightmare, cos you knew you were going to get run ragged for the whole game. I have read that he once said to Billy mid-game "Any chance you can go play on the other wing for a while Billy, I'm knackered"; Billy just gave him a look that confirmed he would be staying put.

It makes you wonder what all the other defenders thought about playing against Billy. Would he go round the outside and smash a cross in, that even Albert Stubbins said he didn't look forward to getting on the end of, cos it'd take yer head off? Would he cut inside and send another exocet toward the goal? Goalkeepers at the time must have been terrified of Billy cutting inside from either wing, cos they knew they were going to get hurt if the ball hit them.

How many keepers must have thought 'Sod this' and dived the wrong way on purpose? Probably more than most, if they were honest. When the opposition had the ball Billy would always be stood on the half way line, taking a breather and on occasion was seen chatting to fans sitting nearest to the pitch. What must he or they have said? "Which way are you going to roast him this time Billy"? Liddell often had full backs trussed up like the Christmas Turkey.

Paisley would have just won the ball off the opposition again; he was a brilliant ball winner was our Bob and then he'd pass it up the line to "our Billy"...........

Then the ball came to Billy's feet; he lifted his head and looked where all the defenders stood. With lightning thought the path to goal shone like an infra-red beacon. He dragged the ball around with his majestic right foot, onto the formidable left. He then dropped his shoulder and feigned a move inside and he was gone, with the dummy having been bought by the hapless right half!

With pace which had never seen before, Billy was now going full pelt down the left wing, the right half still stood where Billy had left him. Were his feet stuck in the mud? He hadn't moved since Billy had gone passed him.

The full back waited as Billy came heading towards him, quick time for a guess? Waste of time believe me, Billy could go anywhere! With a step over Billy dragged the ball inside with his right, "Got him" thought the full back, Billy had done it again, as the full back leant inside, Billy switched again onto his left boot. "Oh Shit!" the full back shouted, Billy was now three yards past him. Yes Billy was that fast.

In came racing the cumbersome centre half, with all the stealth and dexterity of a bull rushing a matador. Only one thought on his mind, which row should I put him in? Billy nutmegged the hapless fool and jumped over the centre half's lunge. One drag with the left boot and Billy was looking right down the goalkeeper's open mouth and the ball was rolling forward onto the dynamite right. Time for the goalie to make a decision...... 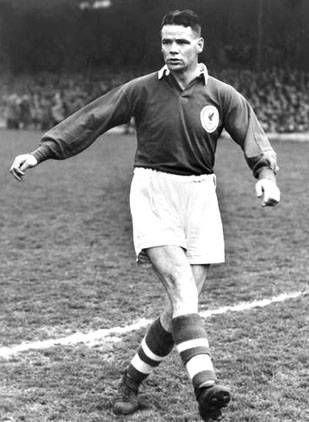 The thinking time had elapsed, the goalie had made his choice. But alas Billy had made his decision on the halfway line and the ball was already billowing out the net.

No, its not a stutter or a record that's stuck its another LIDDELL hat-trick. It's just a case of spotting the difference, between the first paragraph and the following two.

The third goal was a near perfect copy of the first. You would think that defenders would get to know which way to go after a while, but they never did. I sometimes wonder whether Billy had an internal? "Tossing of a coin" heads - left, tails - right, whatever he was doing the defenders rarely guessed right.

On the occasions they were right, you could see them pushing their chests out and either looking at the crowd or one of their own players and saying "Did you see that? I won the ball off LIDDELL". Yes, they held Billy in very high esteem and winning the ball off Liddell was a major achievement. They would probably get home to their wives and kids and sit by the coal fire and repeat the whole incident over and over again.

It would start like this: "The game wasn't very good, but the thing that I will always remember is.............. there I was facing the great Liddell (far more tricky than that Houdini fellah). Billy jinked right, Billy jinked left and guess what? (the kids all look bemused) "I took the ball off Billy Liddell       !"

"Gerroff wid yer Dah, you must have dreamt it, no one takes the ball from Billy Liddell". Perhaps they never would believe, but the defender's memory would have a treasure that would live with him forever.

People old enough to remember the legend that was Liddell will also treasure their memories of Billy, perhaps, until the day their maker calls their name and remember this............

When your maker calls your name,
He will not ask if you won or lost,
But how you played the game.
and believe me when I say
"Boy, did Billy play the game"