Terry has a pee - the Liverpool Lege Terry McDermott 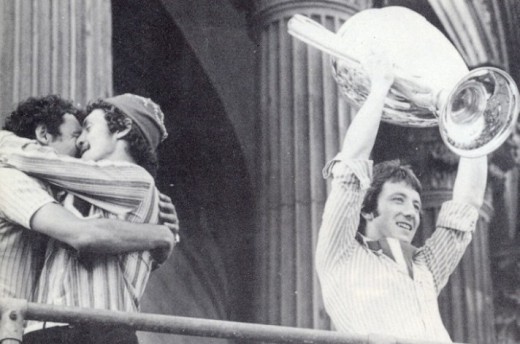 Terry on the balcony that day when the peeing incident took place.

There are many funny stories floating around of Terry McDermott at Liverpool. This is possibly the funniest. Phil Thompson was a witness to this incident.

"There is the legendary story of Terry, out of his mind after a famous city centre European Cup tropy parade in 1977, peeing over the balcony onto some unsuspecting first aid girls down below. Of course, he didn't know anyone was down there. I was standing next to him, but couldn't do anything about it.

The next day he said: "Tell me I was not having a pee over the balcony." When he realised it had happened he said: "You are joking" He couldn't remember.

Thompson loved Terry's antics: "Terry was an unbelievable character. The lads nicknamed him "Lege" which was short for "Legend." He was such a bubbly and funny character and helped to make the dressing room light-hearted and relaxed. He was like that from the day he came. I should say that he had a strange sense of humour.

Terry could drink and get home at two in the morning, but he could still get through any fitness regime you could throw at him the next day. That was never a problem for him. He could go in a sauna for 20 minutes without breaking sweat! He actually hated the sauna. I remember he had a chain that he wore round his neck. I can remember him being in the sauna and the chain must have been gettting hotter and hotter. He suddenly screamed in pain. It was really funny."

Phil Neal: Terry McDermott once got us hysterical in the dressing room, laughing at Bob Paisley’s expense. The boss had a habit of saying the word "doings"all the time. He’d refer to opposition players as "doings" instead of naming them. So Bob comes into the dressing room and starts a talk.

Terry stood behind him with a big grin on his face and every time Bob says “doings” he holds a finger up. By the time he gets to six, Terry is starting to titter and we’re trying not to laugh. Ray Kennedy is kicking me and when he gets to 10, Ray just turns and flees into the toilet, he’s in absolute fits. We were like a bunch of schoolkids."

Alan Kennedy: "I remember him going a week without alcohol so that’s good for Terry McDermott. That’s why he gets into this dream team of mine."

Kenny Dalglish: "Terry’s strengths were running, passing and finishing. Along with his vision, Terry had another great quality: he was always upbeat. The banter at Liverpool was unbelievable particularily when Terry Mac was in full flow."

Terry was a very successful footballer despite his colorful lifestyle: "I used to enjoy my football. I used to enjoy going out at night. I enjoyed having a laugh. I enjoyed wind-ups. That was just my character. I loved having a laugh with the lads. It was just me. Kevin Keegan and Kenny Dalglish were two of the funniest people you could wish to meet. That's probably why all gelled together and got on so well. The camaderie in the dressing room was superb and that's so important. We were by far the best team for a lot of years. When you look back at it, bloody hell, the team that we had, no wonder nobody could beat us. We knew we were the best team in the country, if not in Europe."

Copyright - LFChistory.net - Images is not owned by LFChistory and we acknowledge its copyright