BB, the former editor of Teamtalk and current editor of Sportingtipster.net sent us a good story of Vladi and Paddy celebrating the Worthington Cup final win in unusual style in 2001!

However it happened, and I cannot quite remember how it did, for reasons that will become evident, I found myself in the Players’ Bar after the 2001 Worthington Cup Final in Cardiff.

Just 20 minutes after AJ [Andrew Johnson] had missed the penalty that, in reality, meant that Gerard Houllier had secured his first trophy as Liverpool manager, and it would be the first of five that year, and there was no sign of any players in the bar. Mrs Redknapp was in the corner with a few of her friends, there was a McGann, and I know not which one, and the one and only Russ Abbott. It was free beer and Mr Abbott and myself became friends very rapidly as we took advantage of the Welsh hospitality.

Gradually, the bar began to fill up. It was the Birmingham players who came in first and it was quite astonishing how upbeat they all were. David Holdsworth, in particular, proving to be a really nice guy. AJ was in tears. 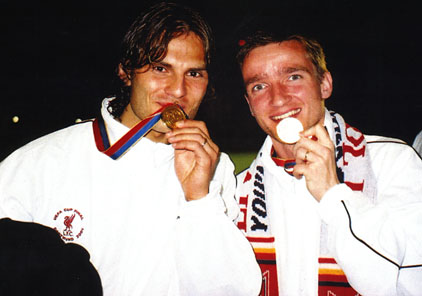 Standing at the bar waiting for another pint of Carlsberg (brand loyalty and all that) and a flushed, freshly showered Jamie Carragher appears next to me and promptly orders three pints for himself. I found this odd as, the next day, he was to report for duty, for the first time, with the England Squad but he put my mind at rest by explaining that it was his intention to get totally p****ed.

I managed to speak with most of the Liverpool players whilst getting more pie-eyed myself. Vegard Heggem showed me the tramline scars which were to end his career, Marcus Babbel’s jumper was the source of much hilarity and then I spotted them – Vlad Smicer and Patrik Berger, well away from the rest of the crowd, standing in a quiet corner watching Blankety Blank on the bar’s TV. The Czech pair smiled politely when I approached for their autographs and Berger explained that they watched TV in order to further their collective grasp of the English language. This was all very strange as, in another part of the room, Gregory Vignal was teaching Emile Heskey some French, Steven Gerrard and Danny Murphy looked bored, Didi Hamann was approaching suicidal tendencies after missing what could have been a vital penalty himself and Sander Vesterveld was simply huge. 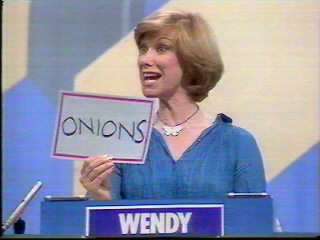 Everywhere I went, everyone I spoke to, Russ Abbott was next to me – smoking his pipe. Thanks to all The Reds who signed the card.

Hopefully, I’ll be invited back on this site as I’ve plenty of other memories regarding my beloved LFC to share with you all.

On the Kop against St Etienne, nipping in back door of the Sandon for an illegal beer or two, David Johnson’s black eye, Skippy’s Datsun 280Z, The Mars Bar Man, Jimmy ‘Black Face’ Munro, the best goal ever (Steve Heighway against Birmingham City), the best save ever (David James’ from Jigsaw Barlow’s deflected shot)… In fact, most everything Anfield over the past 30 years.