View from the people - Adrian Colley

This week on "A View from the People" is the first time that we feature a Liverpool fan. Adrian Colley, a schoolteacher from Yorkshire, tells us the great tale of his first European away adventure in the Spanish capital, Madrid in 2002.

I'm honored to share with you my account of our first European away trip which was more than 13 years ago now. The Reds were involved in Real Madrid's Centenary preseason tournament at the Santiago Bernabeu. Liverpool were invited to take part in the celebrations of 100 years of Europe's most successful clubs along with Bayern Munich and AC Milan, teams who at that time had the most European Cups to their name. Myself and my brother Carl, who now reports for LFChistory.net, set off with our mum Lynn, and family friend Rob to Madrid from Liverpool John Lennon Airport. 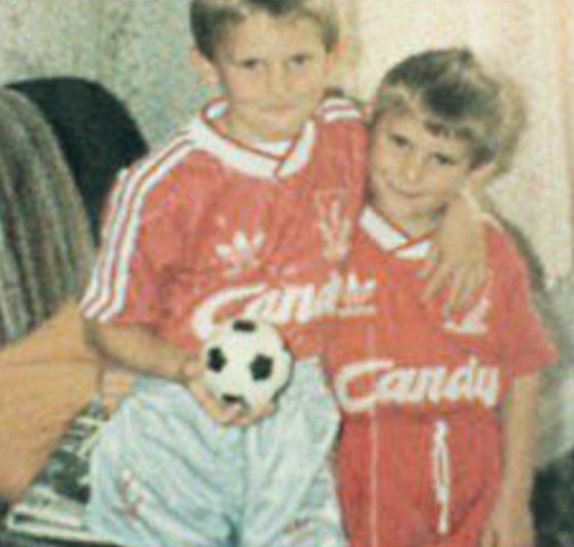 The Reds were defeated in the first game against Real Madrid 2-0. Nevertheless, the fact we were inside a packed out Bernabeu, one of the World Football's most iconic stadiums, watching the Reds take on Real Madrid was enough in itself for us not to be too dissatisfied with the result. Defeat would mean Liverpool now would face AC Milan in the 3rd/4th place play-off in two days time as the Italians were beaten by Bayern later that same evening. On the morning of our free day in Madrid we did the typical; visit a few monuments; the Plaza Mayor and the Royal Palace with a couple of needed pitstops in the bars due to the hot Madrid August weather. Then my brother Carl came up with what would later turn out to be a great idea; visit Real Madrid's training ground. To our amazement as we arrived, by pure coincidence was the exact time the Reds were about to begin their training session. There weren’t many people about and as my brother could speak Spanish, he managed to get us in. There we were watching our heroes train in front of us.

I will never forget the sheer dedication and effort that Sami Hyypia put into that session. When Sammy Lee drew the practice match to an end, Sami wasn't at all happy and insisted the match must go on as it was currently a draw. "There has to be a winner," Sami bellowed over to Sammy Lee. However, Lee had the final word and ended the session as many of the other lads were struggling due to the intense Madrid afternoon heat, but not Sami, what a warrior!

The lads then came over to say hello and kindly signed our Champions League shirts. Meeting the likes of Steven Gerrard, Michael Owen, Danny Murphy and Jamie Carragher was an amazing experience to us as young lads. As the players were ushered onto the bus we managed to catch a few more autographs. Last out were Phil Thompson and Sammy Lee who were more than happy to have a little chat and a photo with us. Sammy Lee was last to get on the bus and even the Spanish bus driver had to get off to tell him to jump on. I'll never forget being so surprised how Sammy broke from perfect Scouse into perfect Spanish to talk to the driver! Sammy, of course spent some time in Spain at Osasuna during his playing days. We were all like "Go'ed, Sammy lad!" 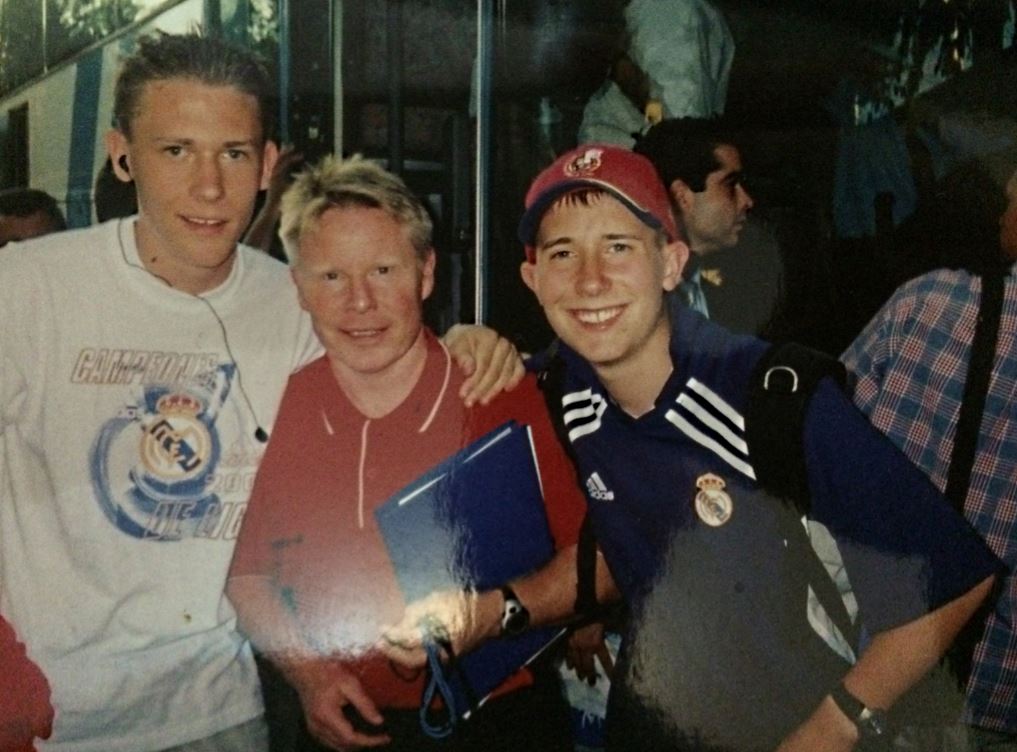 Liverpool ended up finishing 3rd in the tournament by beating AC Milan 2-0. However, my story doesn't end here. 13 years later we were fortunate enough to meet Phil Thompson again at Anfield to parade our "Steven Gerrard one of a kind" banner of a fellow European Cup "lifter". Phil with our banner

Sadly Phil failed to recognise us that day; however, we weren't that disheartened as he didn't even recognise his mate Sammy Lee! We then took exactly the same photograph of the three of us that we had taken with the great Thommo 13 years prior. 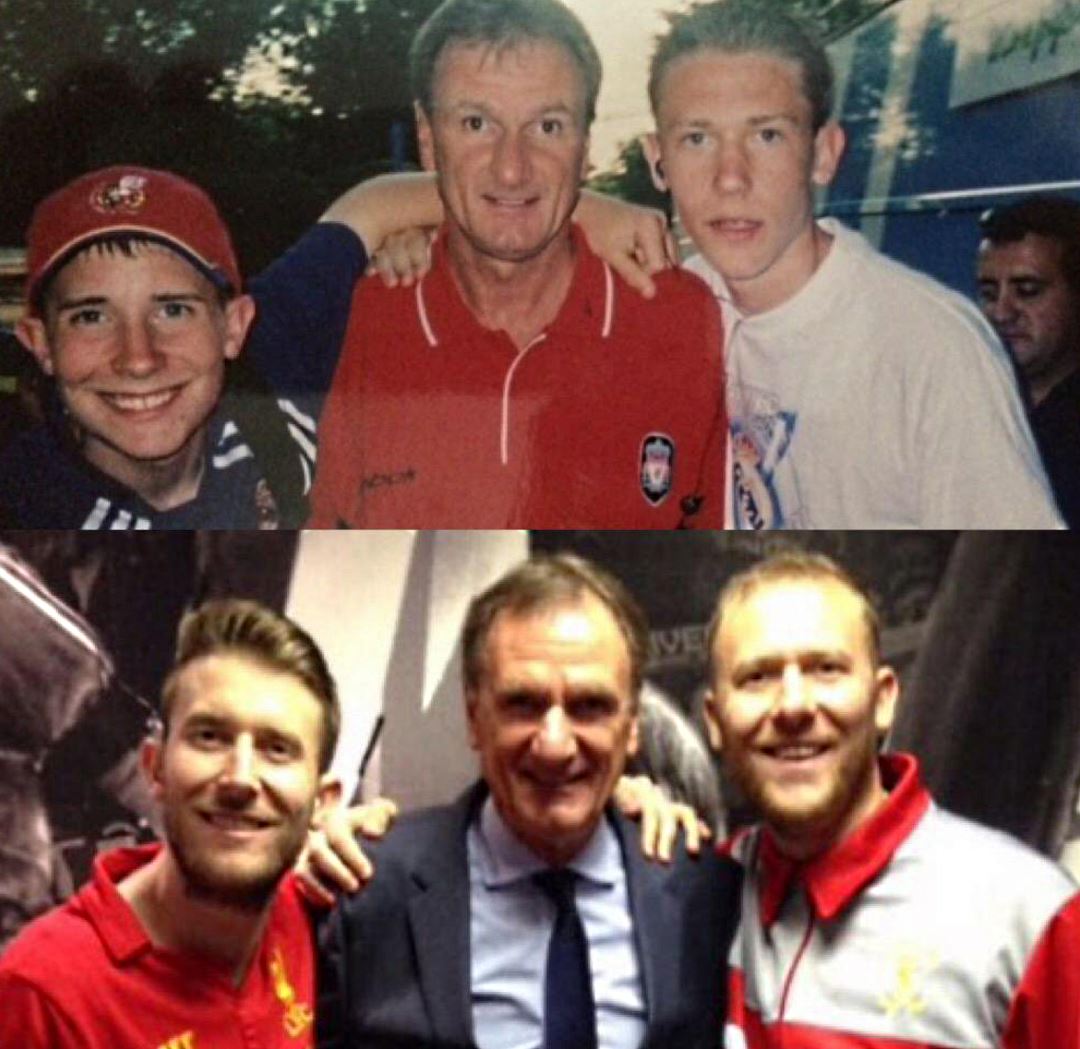 We then got onto talking about the Roma game at Anfield in 2002, where we had to win by two clear goals in the Champions League, which probably to date is mine and my brother's most memorable experience as young Kopites, blasting out the songs from the back of the Kop, helping the lads along to victory. Phil was the Liverpool stand-in manager at the time and that game was also the return of Gérard Houllier. Phil told us: "We prepared for the game as usual without Gérard's presence, the lads had no idea prior to the game that he would be returning until he stepped on the team bus on the way to the ground. The players were delighted to see him and definitely gave them that extra lift going into the game." 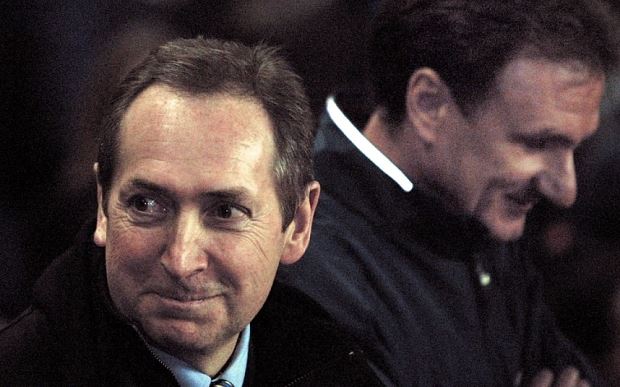 Houllier during his emotional return against Roma

Thommo then told us that he spent most of the first half looking for something slightly unusual on the touchline: "I needed to get John Arne Riise's attention who was on the other side of the pitch. I whistled so loud that the crown on the top of my tooth fell out; I remember scouring the technical area whilst all the lads on the bench were in stitches. When I got in and watched the highlights on TV, the cameras caught me looking for my missing crown and the lads laughing their heads off. Let’s not forget this was a crucial Champions League tie and the commentator says: "It’s great to see Liverpool haven't lost their sense of humour in such an intense atmosphere". If only he knew why they were laughing!"

At the end of the day the supporters are the club's most treasured asset and we would be delighted to hear more stories like Adrian's. Therefore if you would like to feature on "A View from the People" contact [email protected] or on Twitter: @clemente_carl.