Focus on Graeme Souness from Shoot! 1986 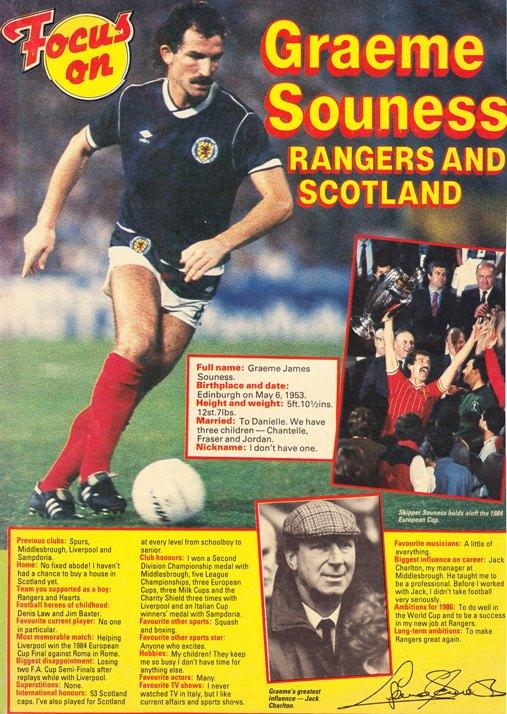 Full name: Graeme James Souness
Birthplace and date: Edinburgh on May 6, 1953
Height: 5ft 10 1/2ins.
Weight: 12st. 7lbs.
Married: To Danielle. We have three children - Chantelle, Fraser and Jordan.
Nickname: I don't have one.
Previous clubs: Spurs, Middlesbrough, Liverpool and Sampdoria.
Home: No fixed abode! I haven't had a chance to buy a house in Scotland yet.
Team you supported as a boy: Rangers and Hearts
Football heroes of childhood: Denis Law and Jim Baxter
Favourite current player: No one in particular.
Most memorable match: Helping Liverpool win the 1984 European Cup Final against Roma in Rome.
Biggest disappointment: Losing two F.A. Cup semi-finals after replays while with Liverpool.
Superstitions: None
International honours: 53 Scotland caps. I've also played for Scotland at every level from schoolboy to senior.
Club honours: I won a Second division medal with Middlesbrough, five League Championships, three European Cups, three Milk Cups and the Charity Shield three times with Liverpool and an Italian Cup Winners' Cup medal with Sampdoria.
Favourite other sports: Squash and boxing.
Favourite other sports star: Anyone who excites.
Hobbies: My children! They keep me so busy I don't have time for anything else.
Favourite actors: Many.
Favourite TV Shows: I never watched TV in Italy, but I like current affairs and sports shows.
Favourite musicians: A little of everything.
Biggest influence on career: Jack Charlton, my manager at Middlesbrough. He taught me to be a professional. Before I worked with Jack, I didn't take football very seriously.
Ambitions for 1986: To do well in the World Cup and to be a success in my new job at Rangers.
Long-term ambitions: To make Rangers great again.