Maybe not a classic match in the true sense of the word but if you have never won the most prestigious and well-known domestic cup competition in the world (despite being winners several times of the championship) and had to listen to the jokes of your city rivals for years like " You've never won the Cup - and you never will", it doesn't matter too much how the victory is achieved. That's why May Day in 1965 is such a special day in Liverpool's history - the day the famous old trophy finally did come to Anfield.

Two beaten finals and a handful of semi-final appearances was a meagre return for a club that was already one of the most successful in the country. But that success had only come in short spells and the club had not won a major trophy since 1947 and spent a few years in the old Second Division before finally achieving the big breakthrough with Shankly's first title in 1964. A year before that championship it really did seem as if the Cup jinx would be broken at last as the Reds marched on to the semi-final but there was heartbreak at Hillsborough when, despite dominating the game, they went down to a single goal from Leicester City, for whom Gordon Banks had an inspired match between the posts.

When the 1965 Cup run started, Liverpool faced an awkward trip to West Bromwich Albion but came through it 2-1, this despite an astonishing incident when centre-half and captain Ron Yeats picked the ball up in his own penalty area, believing that he had heard the referee's whistle. But the only whistle that came was the one which awarded a penalty instead of a free-kick. Fortunately, the spot-kick was sent well wide of the post! In the 4th round Bill Shankly was absent for one of the very few times in his managerial career, having chosen instead to spy on Cologne, the club's opponents in the European Cup quarter-final. Travelling home without knowing any English results, he asked an airport official if there had been any shocks in the Cup that day. "None", said the official before Shankly spotted a newspaper headline highlighting Fourth Division Stockport's surprise 1-1 draw at Anfield. His spluttered comment as he made his way towards his taxi is almost certainly unprintable!

Liverpool survived the replay and then beat Bolton and old foes Leicester (another replay) before being drawn to face Chelsea at Villa Park. This time there was no repetition of the disappointment of two years earlier. Despite having to play this important match only 3 days after an exhausting European Cup play-off against Cologne in Rotterdam, Liverpool swept through to the final thanks to a rocket from Peter Thompson and a penalty from the dependable Willie Stevenson. But they had to wait to know their final opponents until Leeds beat Manchester United in a replay a few days later. 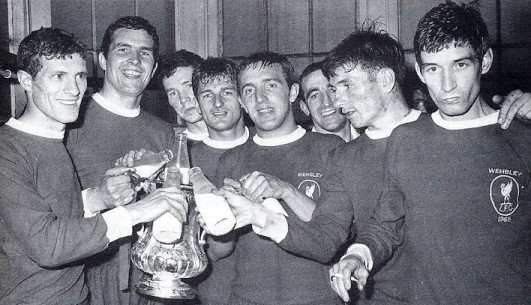 There were many similarities between the Leeds and Liverpool teams of the time. Both clubs would go on to achieve greater things but in 1965 they had only just had a taste of the big time and wanted more. Leeds had suffered the disappointment of losing the championship to Manchester United on goal average whereas Liverpool had the prospect of a mouth-watering European Cup semi-clash to look forward to only 3 days after Wembley. But despite finishing the League season 5 places and 17 points behind their Yorkshire rivals, Liverpool were probably most people's favourites.

A new name would be added to the cup's role of honour whatever happened but the noise and passion of the Liverpool crowd was almost like a 12th man to the players. The clubs received the same number of tickets but Liverpool had twice as many supporters inside the stadium and they certainly made themselves heard in a big way. Shankly said years later that "the whole of Liverpool came alive in the 1960's; the city became world-famous because of the Beatles and other pop groups and the supporters of Liverpool Football Club became world-famous as well". Wembley had never seen anything like the Liverpool crowd before; boisterous and good-humoured, they "behaved" in a way that no previous Cup Final crowd had ever done before. There had already been a BBC documentary about the Kop and their actions at Wembley, watched by millions on television, were soon to be copied by other sets of supporters up and down the country. Instead of the old-fashioned shouts and occasional chants, Wembley was suddenly booming to the sound of pop songs of the time, suitably amended (not always politely !) to match the occasion.

If Liverpool's supporters were like a 12th man, a "real" substitute was nowhere to be seen when Gerry Byrne was hurt in a sickening collision with Bobby Collins in the first few minutes. No substitutes were allowed in those days and after lengthy treatment Byrne was allowed to continue. Nobody knew until afterwards that his collar-bone had been broken in that incident. Bob Paisley knew but Liverpool could not afford to be a man short for most of the game. Byrne's courage in concealing his injury and playing on as if it hadn't happened is legendary. If he had been involved in another heavy collision later on, he could have punctured his lung.

Liverpool had more of the play but Leeds had a mean defence that was very hard to break through. Behind them, Welsh international goalkeeper Gary Sprake was in fine form and saved his side on a number of occasions; Tommy Lawrence on the other hand had relatively little to do. In truth it wasn't much of a spectacle as Liverpool's players and their fans were continually frustrated by their efforts to score the first goal. For the first time since 1947 an F.A. Cup Final was level after 90 minutes. But only three minutes into the extra-time which Liverpool's players could have done without considering their forthcoming date with Inter, the breakthrough finally did arrive. Willie Stevenson went on a jinking run down the centre, brushing past a couple of defenders on his way, before threading the ball through to Gerry Byrne near the left-goal line. The cross seemed set up for one of Roger Hunt's ferocious volleys but he stooped instead and nodded the ball gently into the goal which Sprake had left as he came out for Byrne's cross. Considering how little had been seen of Leeds as an attacking force, it looked as if this would be the goal that would win the Cup.

The victory chants died in the throats of the celebrating Merseysiders when Jack Charlton's knock-down allowed Billy Bremner to smash a fierce shot inside Lawrence's left-hand post. Despite this blow, Liverpool continued to play with patience, even though that they knew that in reality they now had to win the Cup for a second time. The prospect of a replay was looming when Ian Callaghan made ground down the right-wing 9 minutes from time and crossed for Ian St. John to launch himself into a twisting, diving header which flashed past Sprake. There was no way back for Leeds this time. Liverpool played out time until the referee's final whistle brought an awesome display of emotion on and off the pitch.

Despite championship and European honours, Bill Shankly always admitted that this was a day to cherish forever. He wrote in his autobiography "Grown men were crying and it was the greatest feeling any human being could have to see what we had done. There have been many proud moments. Wonderful, fantastic moments. But that was the greatest day, the one I treasure the most". High praise indeed from a man who gave us so many great days. But in a way - and despite everything that has happened since - Shankly was right. The League Cup had only just started, European club competitions were very new. For decades and decades, there was only the F.A. Cup to take interest away from the monotonous routine of League matches. Now Liverpool had finally won the F.A. Cup for the first time in their 73-year history. No longer would they have to listen to the sarcastic jibes of the Evertonians. They held their heads high as they returned to the city the following day to be greeted by such an astonishing crowd that even Shankly was not prepared for the strength and passion of the welcome. Even though he had been a Cup winner himself with Preston in 1938, he had never experienced anything like this before. It has been estimated that a quarter of a million people were hemmed into the city centre's streets as the team arrived at Lime Street station by train. Most of those thousands saw little as the official party struggled through to the Town Hall for their civic reception but it didn't matter. Their name was on the Cup at last and that was the only thing that mattered.

For the time, this was a quite astonishing homecoming. Future Liverpool teams would become used to parading their trophies around the city on an open-top bus. But this was a generation before when for many people support for their local football team was the most important thing in their lives, a chance to be part of something unique and special away from the problems and hassles of daily life. Like Shankly said, this WAS their greatest day.

Postscript
-------------
Most people who know Liverpool as a city will be aware of the waterfront buildings and especially the Liver Building, on top of which perch the two Liver birds, facing each other and surveying the whole of the area as if to warn of any danger that might come. It used to be said that Liverpool would never win the Cup until the Liver Birds flew away - in other words, that they never would. Amazingly, as Liverpool's victorious players started their lap of honour around Wembley Stadium, those two mighty birds had indeed "flown away". As the streets emptied as kick-off time approached and millions settled down in front of their television sets to watch the game, those mythical creatures had been taken down for cleaning. So the legend did come true after all!