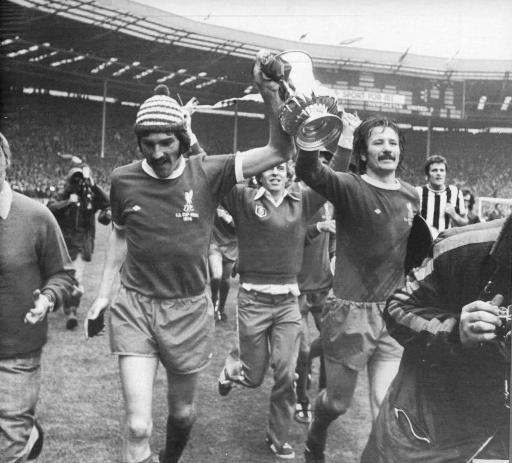 This was a keenly-awaited final in front of perhaps the two most passionate sets of supporters in the country. Bill Shankly's rebuilt side of the early-70's was reaching its peak and they had the satisfaction of starting the 1973-74 season as defending League champions as well as being holders of the UEFA Cup. But early exits from the European and League cups meant that although they held on to the blistering pace set in the championship by Don Revie's Leeds United for as long as they could, the F.A. cup became their major realistic chance of adding some silverware to the trophies won a year previously.

All did not go according to plan in the early rounds however. Doncaster Rovers, bottom of the old Fourth Division, arrived at Anfield in January for their third round tie and promptly turned the League tables upside down by taking a 2-1 lead after Kevin Keegan had given the Reds an early lead. It was Doncaster-born Keegan who rescued a replay with a second-half headed goal and frankly Liverpool were relieved to get a second chance with Doncaster hitting the woodwork in the game's closing minutes. The following midweek it was a different story and a goal in each half saw Liverpool safely through to the 4th round. Here they needed another away replay after drawing at home to one of Shankly's former clubs (Carlisle United) but it was third time lucky at home in the 5th round where Ipswich were comfortably beaten 2-0. The 6th round draw had paired the two First Division giants of Liverpool & Leeds together but nobody told Bristol City, who went to Elland Road for their replay and provided one of the biggest cup shocks of the decade by winning 1-0. Their reward was a quarter-final with Liverpool at Ashton Gate but the visitors had just the better of a tight match, with John Toshack scoring the only goal in the second half. It also took a replay to defeat Leicester City in the semi-final. Following a goal-less draw at Old Trafford in the first match, second-half strikes by Hall, Keegan & Toshack took the club through to their 5th F.A. Cup final.

Newcastle's path to to the final had not been without its problems either. On the same day that Liverpool were struggling to overcome Doncaster at Anfield, non-League Hendon travelled up to St. James's Park and achieved a meritable 1-1 draw. However, they lost the replay convincingly by four clear goals. Then trailing 1-3 at home to Nottingham Forest in a later round, a pitch invasion by disgruntled home fans unsettled the visiting team so much that when the game resumed, they conceded 3 more goals and lost the tie 3-4. However, an F.A. enquiry made that result void and the two clubs eventually met at neutral Goodison Park, where a single-goal victory took the Geordies through to a semi-final with Burnley, whom they beat without much trouble at Hillsborough.

Once he had made several alterations to his team at the start of the decade, Shankly felt that little further change was necessary, a fact borne out by the revelation that 8 of Liverpool's starting line-up at Wembley in 1974 had suffered the heartache of extra-time defeat by Arsenal in 1971. The only other differences in the 3 years since that previous F.A. Cup final appearance were the introduction of Kevin Keegan, Peter Cormack & Phil Thompson for Alun Evans, Larry Lloyd & Chris Lawler with Tommy Smith reverting to full-back from the midfield role he had played as captain in 1971. Newcastle's star man was Malcolm Macdonald, a regular scorer on the Magpies' road to Wembley and a man who had foolishly declared to any pressmen who cared to listen what he was going to do to Liverpool in the final - words that came back to haunt him. There were also two men in the Newcastle starting eleven who would subsequently go on to greater things with Liverpool - Terry McDermott & Alan Kennedy.

There were few clear chances in the first period, although Liverpool did have more of the play. It was in the second half that the Reds really turned on the style with three marvellous goals and another most unluckily disallowed for offside. Alec Lindsay became the scorer of perhaps the best Cup Final that never was when, leading a counter-attack from half-way, he passed the ball forward in Keegan's direction before racing on to the return and thumping a fierce shot across McFaul and into the far corner of the net. But his jubilation was cut short by a linesman's flag. Television replays showed that the return ball had actually reached him via a Newcastle boot and not Keegan's but only a few minutes later justice was done. Brian Hall ducked (or maybe slipped !) under Tommy Smith's right-wing centre and Kevin Keegan controlled the ball before driving it past McFaul. The goalkeeper got a touch but the pace and accuracy were so great that he had little chance of preventing the goal.

That score gave Liverpool added confidence now that they had finally made the breakthrough and Ray Clemence had little to do in the last 30 minutes of the game. His deep punt upfield effectively sealed the result 15 minutes from time. Toshack back-headed the ball into the Newcastle penalty-area and Steve Heighway timed his run perfectly before placing his shot neatly out of the goalkeeper's reach. Shortly before the end, Kevin Keegan added a third goal after a marvellous move which involved several players and the ball going from one side of the pitch to the other before Tommy Smith's low cross eluded keeper and defenders alike and was turned in by Keegan from just a couple of yards. It was the biggest margin of F.A. Cup final victory since 1960, when Wolves had defeated Blackburn. Had Lindsay's spectacular shot been allowed to stand, you would have had to go right back to 1903 to find a more convincing final win!

It was the style of the win that had been so satisfying and it seems unfair to pick one or two players out. Sure, Kevin Keegan scored twice and Phil Thompson played with maturity beyond his years to snuff out the threat of Macdonald & Tudor. But it was in every sense a terrific team performance and one that gave every supporter a lot of pride and satisfaction. Bill Shankly walked off alone, choosing to allow his players to share the spotlight of the lap of honour without him. As he departed the arena, he lofted a red flag over his head in acknowledgement to the massed ranks of Liverpool fans at the tunnel end of the stadium. Within a few weeks, he had stunned the football world by announcing his retirement. Although he did lead the team out in the Charity Shield at the start of the following season and also took charge the following week in a testimonial match at Celtic, the Cup Final became his last competitive match as manager of the club he had served so well for 14 and a half years. There could be no greater tribute or reminder of his importance to the Liverpool cause than the performance his players gave him to win his 6th and final major trophy in 10 memorable years.