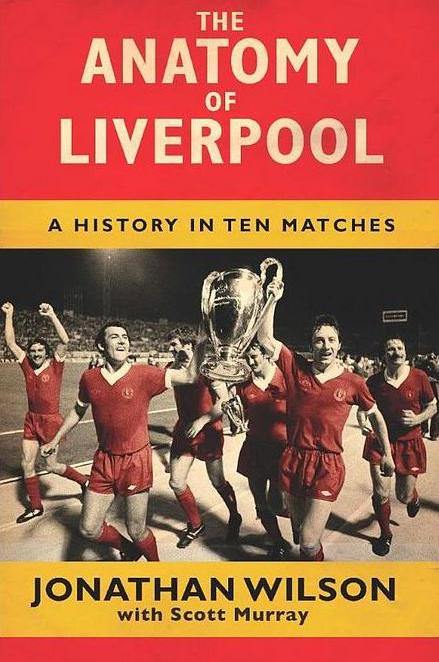 By Jonathan Wilson with Scott Murray

When I read Jonathan Wilson’s 2008 book Inverting The Pyramid , I did struggle through parts of it. Maybe my brain is only wired to process football facts and figures and not the game’s theory and tactics? Whatever the reason, I did approach The Anatomy of Liverpool with a certain amount of trepidation, despite knowing that Mister Wilson is recognised as being one of the finest sports-writers of our time. I was worrying unnecessarily. This Anatomy (Orion had already published Jonathan’s Anatomy of England in 2011) is a truly outstanding book in which the reader gets the full benefit of the author’s writing talents.

In 2013 Wilson uses the same “History in Ten Matches” concept with which he approached his book about the national team two years earlier. He picks ten matches from Liverpool Football Club’s history, all carefully selected because “certain games lie on the fault-lines of history. Perhaps they mark the end of one era and the start of another”. The tragic match at Hillsborough is deliberately omitted because the subject-matter is “too big for a book of this nature”. So we end up with ten matches but only four of the ten are cup finals, although the destiny of the English championship did rest on two of the others. Interestingly, because sports- writers are often reluctant to tackle events that they did not live through themselves, the first match took place in the 19th century towards the end of Queen Victoria’s reign; and the second shortly after the end of the Second World War. All the other eight took place in more modern times (what I might call the video/dvd-age) because those matches can all be watched in their entirety and dissected minute by minute if necessary. For those early matches in 1899 and 1947, the only option is to trawl through old newspaper reports and maybe look at a few grainy photographs. Yet Jonathan’s coverage of those two matches is quite sensational. As you read, you really do feel as if you are there watching and not just reading about it decades afterwards. It is a rare gift when an author can captivate a reader in that way.

Although each chapter deals with a carefully-selected match, there is a certain amount of scene-setting and post-match analysis too. That is probably best defined in the very first chapter. Most Liverpool supporters and, indeed, supporters of other clubs, know that the club was formed in the wake of a very acrimonious split between Everton, the tenants of Anfield, and that club’s president, John Houlding, who was also their landlord. Houlding chose to stay and formed his own club in 1892, the modern-day Liverpool Football Club. Their rise was meteoric. At the end of only their sixth season as a Football League club, the team was poised to win the English championship as it prepared for its final match of the season, away at Aston Villa. But Villa, too, were in the same position. Both clubs had the same number of points but Villa, thanks to huge wins in their previous two fixtures, had a slightly better goal-average. Just as in another titanic end-of-season decider ninety years later, the home team knew that a draw would be enough for them to be declared champions. But the away team had to win. Unlike in 1989 the away team floundered and found themselves five goals down at the interval, from which obviously there was no way back. But Houlding’s dream was still alive and he lived long enough to witness his new club finish top of the pile in 1901. “No club has ever made the journey from birth to champions so quickly, and none ever will again”, is Jonathan Wilson’s accurate summing-up of that achievement.

The first half of the 20th century is ignored completely, apart from the first full post-WW2 season when the club won its first silverware since 1923. “George Kay’s great side (the side that won the title in 1947 and reached the club’s first Wembley final three years later) contained as many bona fide Liverpool legends as any other”. If younger supporters doubt that, History will put them right. Club Chairman William McConnell, a caterer by trade, took the radical but inspired decision to send his players to America during the summer of 1946 after which, suitably fattened up by non-rationed food, they were able to pace themselves through a wretched winter and a marathon First Division season that started on the last day of August and ended on the last day of May. As in 1899, everything came down to the final match. Home team Wolverhampton Wanderers had to win to be sure of finishing first; away team Liverpool had to win (which they did) and hope that Stoke City would not win their final match at Sheffield United (which they didn’t).

The 1947 squad did not build on that triumph and the next ten years were difficult and included a first relegation from the top division since 1904. But so far in the past were the successes of the Nineteen-Twenties, it can reasonably be argued, declares Wilson, that “had it not been for (George) Kay, there would have been no sleeping giant (for Shankly) to awake”.

Is it surprising that only two matches are chosen from Bill Shankly’s reign (1959-1974)? Not necessarily. Although the F.A. cup final of 1965 is picked, there are a few others that could have been but that cup success in the middle of the Nineteen-Sixties was the catalyst for a lot of things that happened in the years that followed. But the home-and-away European Cup defeats to Red Star Belgrade in Shankly’s final season were of critical importance. The Boot Room post-mortem the next morning realised that Red Star’s “control of possession had enabled them to control the game”. Shankly’s successor, the astute Bob Paisley, realised that tactically things had to change if the club’s success under Shankly was to be maintained. Looking back on those two 1973 defeats by the Yugoslavian champions Paisley knew that “we had to learn how to be patient like that and think about the next two or three moves when we had the ball”.

And so on to even more success, more European cups and more domestic titles, until the zenith of this jewel-laden journey unsurprisingly ends in Turkey in 2005. But each leg of this journey is a thrill on its own, from the 1988 destruction of Nottingham Forest (“that exhibition stands as the high point of a dominance that may never be repeated”) and the recognition that manager of the time Kenny Dalglish “righted a listing ship after Heysel and sailed it through the unspeakable bleakness of Hillsborough” through “a decade of alarming post-Boot Room decline” until Steven Gerrard’s trusty right boot sealed victory against Olympiakos in December 2004 with the second half of that match being “almost certainly the pivotal act in Liverpool’s modern history”.

Is there a negative side of this book? Sadly, there is. Eight of the ten matches are available to watch in their entirety; and there is no doubt that one or both of Jonathan and Scott did that because the match reports are so detailed. Because their knowledge of Liverpool Football Club’s history can only have grown during their research for this book, it is quite mystifying that so many factual inaccuracies were not spotted. In chronological order we are told that the successful spot-kick taken by Willie Stevenson against Chelsea at Villa Park in the F.A. Cup semi-final of 1965 was “the only penalty he ever took for the club”. He took nine, of which he missed just one. How could Alan Kennedy have scored against Club Brugge in the UEFA Cup final of 1976 when he didn’t even join Liverpool until 1978?! Kevin Keegan’s “last goal at Anfield” did not come against Zurich in the European cup semi-final of 1977 (he scored twice more in home league matches as his Liverpool career came to an end). The F.A. Cup semi-final of 1985 was not played “in a fearsome gale at Hillsborough” because it took place at Goodison Park, Liverpool; and finally, to dispel one of football’s most popular myths, John Aldridge was not “the first player to miss a penalty in a Wembley final”. He wasn’t even the first player to miss a penalty in a Wembley final in 1988 because Arsenal’s Nigel Winterburn missed one against Luton Town in the League Cup final at the national stadium twenty days before Liverpool faced Wimbledon there. Is it churlish to mention these errors? No, I don’t think so. I am just surprised that someone who is so clearly such a master of the written word could make so many mistakes. Some admittedly are small but they are errors nonetheless. Mixing up two players who have the same surname but joined Liverpool four years apart is hardly an insignificant error.

Even the finest authors who carry out the most meticulous research can get things wrong. I am sure reviewers get things wrong too! Don’t let a few historical inaccuracies put you off. This is a quite stunning book that is deserving of the highest praise. It takes you on a wonderful evocative journey through the ages. I urge you to step on board and join the party!