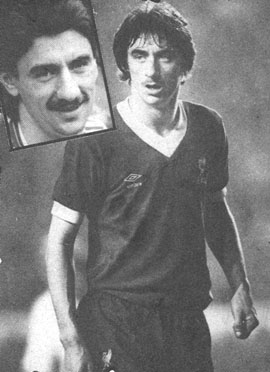 Derby matches are usually so tight that it is remarkable indeed when one of the clubs has the satisfaction of really thrashing their neighbours. But to score 5 away from home, and it could have been 10, is rare indeed. Sure, Liverpool had a GREAT team at this time whereas their city rivals were still a few years short of becoming a real force in the land again. But Welshman Ian Rush was the man who destroyed his boyhood heroes with the most clinical display of finishing that could have been seen in a match of such importance. His pace and accuracy tore the home team apart.

Oddly enough, Liverpool only scored once in the first half, when Alan Hansen's delicate through ball dissected the home defence for Rush to run on to and drill a low shot past his countryman Neville Southall. It was a deserved lead because Rush had hit the bar in the opening seconds and Sammy Lee was also denied by the woodwork in the first period. Evertonians will claim that the sending-off of Glenn Keeley after 37 minutes in his one and only appearance for the Blues contributed greatly to their side's downfall. But the truth is that Keeley deserved to go for cynically holding back Kenny Dalglish when the Scot appeared to have a clear run on goal. Dalglish was also furious at having a first-half header from Alan Kennedy's left-wing cross mysteriously disallowed for offside. The players had actually lined up again for the kick-off before the referee noticed a linesman waving his flag in the air. Television replays later showed that the linesman made no effort to lift his flag as Dalglish timed his run perfectly to ram his header beyond Southall. It was only a second or two later that he decided that Kenny must have been offside!

A one-goal lead is always precarious but Everton's luck ran out in the second half. However, Liverpool didn't need much luck of their own. They played some mesmerising football and ran the home defence ragged. Six minutes into the second half Rush scored his second with a shot from the edge of the area which was slightly deflected away from Southall's dive. Four minutes later the home defence went to sleep as Liverpool took a throw-in on the right and the unmarked Dalglish crossed for Mark Lawrenson to steer the ball in at the back post in front of the delirious visiting fans. Other chances came and went but Rush wrote himself into the history books when he raced from half-way to beat Southall again, showing coolness beyond his years to steer his second shot into goal after the first had rebounded from the post. But even he wasn't finished and completed the rout five minutes from time with another run from the halfway line which ended with him rounding the goalkeeper and stroking the ball into an unguarded net.

Many of the home support had already gone home to lick their wounds by this time but the Liverpool fans knew this was a moment to savour. Yes, they were defending champions and would go on to retain their crown but to score 5 against the Blues on their own ground was a sweet moment indeed. Ian Rush was in some of the best form of his career at that time, even though it was only his second full season in the First Division. He scored another hat-trick 7 days later against Coventry and ended up with 24 League goals from 34 matches. But few will have given him as much pleasure as the four he grabbed at Goodison in one of the biggest-ever derby wins.