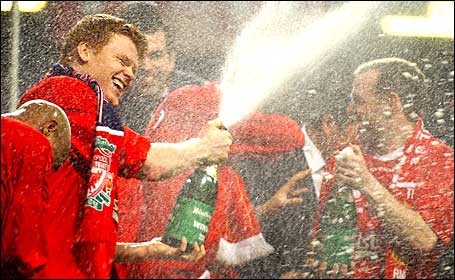 An exciting final is ahead on Sunday. Liverpool meet Chelsea at the Millennium Stadium. The League Cup has been ridiculed the last few years, associating it with one of Disney's most beloved characters. However this season spectator interest has been greater than ever because the bigger teams seem more intent on winning it. The last two League Cup finals Liverpool played in were edge-of-your-seat stuff and no matter what we are guaranteed a great final. LFChistory offers more stats on the League Cup than you could wish for and probably more than that.

+ The league Cup started in the 1960/61 season. The secretary of the Football Association, Alan Hardaker, was the man behind it. This is the 44th final.

+ The League Cup is now known as the Carling Cup, after its sponsor. Previous names include The Milk Cup, Littlewoods Cup, Rumbelows Cup, Coca Cola Cup and Worthington Cup.

+ The following teams have won the Cup.

+ Liverpool didn't compete again in the League Cup until in the 1967/68 season. The final was moved to Wembley in 1967, the winner assured of an UEFA Cup place and that increased interest in the competition. Liverpool drew 1-1 with Bolton, but were knocked out in the replay.

+ Liverpool have only lost the League Cup final twice, against Nottingham Forest after a replay in 1978 and in 1987 against Arsenal.

+ Ian Rush has made most League Cup appearances for Liverpool, 78 in total and scored most goals as well, 48. Rush has scored 49 career League Cup goals in total, a record he shares with Geoff Hurst.

+ Here you can see Liverpool's overall record in the League Cup, round-by-round - http://www.lfchistory.net/stats_competition.asp?ct=11.

+ Neither Liverpool or Chelsea had an easy route the final.

So prepare for an exciting game and hopefully we'll be celebrating Liverpool's 8th victory in the League Cup.