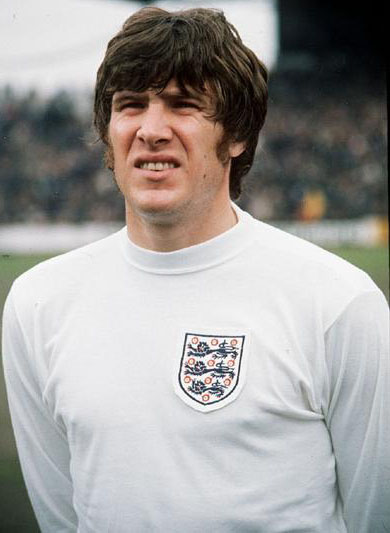 Exhuberant left-half for Liverpool and England, who became a TV personality.

Emlyn Hughes, captain of Liverpool and England, a forceful and exuberant left-half, whose charging runs upfield earned him the nickname Crazy Horse, has died aged 57. He underwent surgery for a brain tumour in August last year and his condition deteriorated in the last few days.

In his 12 years at Liverpool, Hughes won the league title four times, the European Cup and Uefa Cup twice each, the FA Cup once, and the League Cup with his next club, Wolverhampton Wanderers. He won 62 England caps, 23 as captain.

After his playing career, Hughes became a popular figure on British television, appearing regularly as team captain on the BBC's A Question Of Sport. He was also a successful after-dinner speaker.

There is little doubt that his talents were seen to best advantage when he played in midfield, where he could give them the fullest expression. Essentially a right-footed player, he was never wholly at ease when used at left-back. His natural, adventurous instinct was to overlap down the flank, but whenever he did so, however many opponents he left behind, there was always that frustrating moment at the end of the run when he had to switch the ball from his weaker left foot to his powerful right, so that the cross was always an inswinger, after vital seconds had been lost. But he could play in three different positions.

Hughes was born in Barrow, the son of a Welsh international rugby league player who had toured Australia as a forward with the British Lions in 1946. At school he played rugby, but soccer appealed to him more, and he eventually succumbed to the offers of the manager of Blackpool, Ron Suart. Hughes was then an inside forward, but Blackpool turned him into a left-half, and as such he made his debut for them in the 1965-66 season.

The following season saw him gain a regular place in the side, watched from the terraces by his proud father, who was wont to extol his son's merits to surrounding fans. Hughes played 28 League games for the Seasiders that season, before Bill Shankly, the famously idiosyncratic manager of the Liverpool club, a tough Scotsman who had once played right-half for his country, brought him to Anfield for £65,000, then a record sum for a full-back, which at the time he was.

He was fast, he was strong, he tackled well and he showed an enthusiasm which was sometimes branded as excessive. Boyish to a degree, it was a quality which would never disappear from his game, and his high voice became familiar to those who could hear it from the field and those who, in later years, saw him on BBC television, not afraid to put his arm around even a princess.

He played 10 first division games for Liverpool in 1967-68; thereafter he was an irreplaceable member of a team which grew steadily to dominate not only the English, but the European game. He broke into the England team in November 1969, as a left-back in a friendly game against Holland in Amsterdam. When he played against Portugal at Wembley the following December, a game which England won 1-0 in unconvincing fashion, one wrote of him, "England's attacking potential was further compromised by the choice of a left-back who won't use his left foot. Emlyn Hughes, a fine, forceful player for Liverpool, ran through often into the empty space on the left. Each time, alas, there was a mandatory hiatus when he carefully adjusted himself to centre with his right foot. This, in an epoch when every second counts, is perfectly absurd and might be distinctly costly were Hughes faced by a better right-winger, Jairzinho (Brazil) or Magnusson (Sweden), who would run him down the line."

Hughes never played in a World Cup. In 1970, he was a member of the England squad, which, as holders, competed in Mexico, but Alf Ramsey, the manager, preferred the left-footed Terry Cooper and the equally left-footed Bob McNab as cover.

Hughes, however, had a major international career, which lasted to the 1979-80 season when, having joined Wolves from Liverpool, he made his last three appearances for England, two as a substitute.

After Arsenal had won the cup with a late goal by Charlie George, Hughes told Shankly: "I'm very, very sorry Boss, that last goal was down to me; I was knackered!" "That's all right, Emlyn," Shanks is said to have replied, "everybody makes mistakes!" Only, as Hughes walked away, to remark unkindly that this was the man who had lost them the cup final. He was awarded the OBE in 1980.

Two of Hughes's finest achievements were to lead Liverpool to victory in the European Cup finals of 1977 in Rome, against Borussia Mönchengladbach and at Wembley, in 1978, against Bruges, each time in perhaps his best position, at left-sided centre-back.

After Wolves, he played for Rotherham United as player-manager, Hull City, Mansfield Town and Swansea City.

In addition to his TV appearances, Hughes worked for Yorkshire-based Real Radio as their main sports pundit for two and a half years. After launching their phone-in, he worked for the station until the end of last season. He was also vice-president of the Dystonia Society, concerned with the neurological disorder.

He is survived by his wife Barbara, son Emlyn Jr and daughter Emma.