How Shankly helped St John to avoid a suspension

I have been looking into aspects of LFC statistics for LFChistory that are often difficult to find and difficult to check... like players sent off and missed penalties etc. I rely on my own memory as much as I can, but also through the many books that have been published about the club. Of equal importance are the first-hand memories of supporters who actually attended matches. I have been greatly helped in my research by questioning other fans and they in turn have passed my questions on to others.

Ron, a friend of mine who has hardly missed a home match for around 45 years and who was always at away matches too until he was made redundant ... has been a tremendous help and when I was discussing players sent off he added a couple to my growing list that I had no knowledge of. I was later able to get them confirmed but one incident baffled me. Ron told me he had been at a game in the 1960's when Ian St. John had been sent off. He knew it had been away at Coventry but couldn't remember the season. Later he was able to tell me it had been a "Boxing Day" fixture and that made it easy to find. But what was puzzling me was that the player didn't serve a suspension, normally automatic for a sending-off. The Saint played in every league and cup fixture from that Coventry game on 26th December 1967 until the end of the season. So WHY didn't he get suspended? 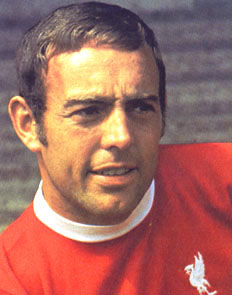 Ron met a real old-time supporter before the Champions' League match with Monaco and quizzed him about the incident. Through his reply, we have got the truth about the incident ... or as close to the truth as we are likely to get because some "Shankly stories" are almost apocryphal! But this is what is alleged to have happened: Ian St. John got involved with a player called Brian Lewis and as a result was sent off. The Saint had a bit of a temper. Bill Shankly and Bob Paisley accompanied Ian St. John to the disciplinary hearing, presumably in London (they usually were in those days). But Shanks had thought up a cunning plan to make it look as if his player had reacted only under the most severe provocation. It is alleged that he told St. John to get some black shoe-polish and smear it on his testicles. Only Shankly could think of something like this!! And they would use this as evidence in the player's favour to show that he had been grabbed down there and been severely bruised as a result, which resulted in the inevitable retaliation.


Now History doesn't tell us whether St. John actually pulled his pants down to show this 'evidence' to the disciplinary committee. But maybe just Shankly's ... er ... offer for the player to do that was enough for them to believe his story. Whatever actually happened, Ian St. John walked out of that disciplinary hearing as one of very, very few men who have escaped a ban after being sent off for violent conduct.


When his playing days were over, St. John had a short spell as manager of Portsmouth. After his appointment, he was introduced to his players one by one and came to a player towards the end of the line. That player was the same Brian Lewis with whom he had fallen out in 1967. Apparently Brian introduced himself by saying "I don't know if you remember me but I was the player you were sent off for when I was at Coventry a few years ago"!


And THAT is why Ian St. John didn't miss a game for the rest of the 1967-68 season. And you know what ... this story is SO ridiculous that in my opinion it just HAS to be true!"