We will now look at one that could be seen as being the most valuable in historic terms – that which saw Bill Shankly’s first match in charge of the Reds. 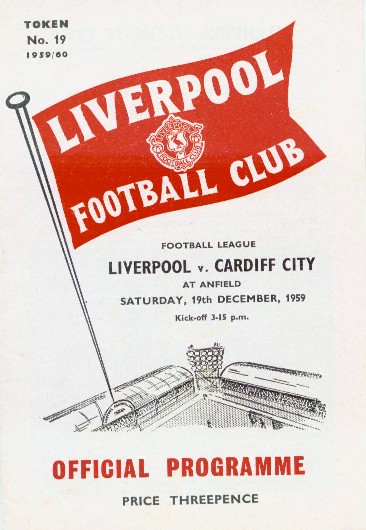 Bill Shankly’s appointment as new team manager was announced by the club on 30th November 1959. It was initially agreed that he would stay on as manager of Huddersfield Town up to the New Year. However circumstances allowed an earlier release and he officially took over as manager at Anfield on December 14th.

His first match in charge was a Division Two game at Anfield against Cardiff City on 19th December 1959. Liverpool produced their usual 16 page pocket sized programme of that time. The Liverpool programmes from this historic period provide very little information on the managerial change, and the only mention in the Cardiff programme is a brief welcome message from the Board.

Just 27,291 people turned up on the day to see Liverpool lose 4-0. In monetary terms an original copy of this issue now fetches over £10, and is rapidly increasing in value as collectors try to obtain it because of its historic significance. It is worth noting that the club issued a reproduction of this programme in the Coventry City programme played on 18th December 1999, to mark the 40th anniversary of the great man’s arrival. The reproduction issue is printed on a high quality glossy paper and states that it is a copy on the back page.

For more information on Liverpool programmes and memorabilia please send 2 x first class stamps for the latest bulletin of the Liverpool Programme Collectors Club.  This contains many articles on past issues and news on current season programmes. The club has been established for over 17 years and exists to promote the enhancement of the hobby and the sharing of information on Liverpool memorabilia between collectors. Write to: Keith Stanton, 4 Hillview Gardens, Woolton, Liverpool, L25 7XE  (0151 42 86 087)