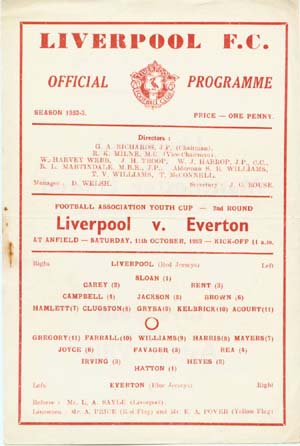 Once the programme collecting bug has well and truly bitten, many collectors move on from just focusing on first team related issues to obtaining programmes from any fixture featuring all levels of their chosen side. For collectors of the big two Merseyside teams this includes reserve team, Lancashire Senior Cup, Liverpool Senior Cup, youth and ‘A’ team fixtures.

One of my favourite programmes in my collection is that which Liverpool issued for the meeting of their youth team with that of neighbours Everton in October 1952.  It is significant because of it’s historic value, coming from the first ever season of the FA Youth Cup.

The FA had presented a national trophy for teams confined to young players whose age did not exceed 18 on the 1st September that year, a rule that still stands today. The idea for a Youth Cup competition had emerged from the success of the FA County Youth Championship, which was established in 1945. It was also aimed at being a platform for talented school leavers to help them break into first team football. There were over 100 entries in the first season, with the early rounds being played on a regional basis. In 1999 the number of entrants had risen to 312.  To qualify for the Youth Cup, teams must play in a Youth League or an equivalent competition and must be fully integrated within the main structure of a Senior Club.

In it’s maiden season the second round of the competition saw Liverpool’s youth team drawn at home against Everton. I believe that this might well have been both clubs first ever FA Youth Cup game. The match took place on Saturday 11th October with a 11-00am kick off. The reason for the early start was that Liverpool’s reserve side were to host Manchester United’s second XI later that day at 3-00pm. For this fixture Liverpool issued a small single sheet programme. As illustrated, the match details and line-ups appear on the front. The reverse lists the next two fixtures at Anfield.

For the record, Everton won by three goals to nil. What also makes Youth Cup programmes of interest is in spotting how many of the youngsters went on to achieve first team football. For Liverpool just two of their players listed went on to appear in first team games for them. Their number 4, Donald Campbell, played 48 times for the Reds. While the number 11 Alan A’ Court, who had just signed for Liverpool two weeks before, went on to play in 381 first team matches for them, scoring 63 goals. Others in Liverpool’s line up who went on to play league football for other sides were Brown (66 league games), Clugston (one league match) and Gryba (72 league games).

Given the flimsy nature of the paper used and the fact that it is now over fifty years old, makes this a very rare programme. With the early kick off one would also assume that the attendance would have been low so very few programmes were probably printed. Value, at least £40.

Liverpool have won the FA Youth Cup once in the 1995-96 season, and been runners up twice.

For more information on Liverpool programmes and memorabilia please send 2 x first class stamps for the latest bulletin of the Liverpool Programme Collectors Club.  This contains many articles on past issues and news on current season programmes.  The club has been established for over 17 years and exists to promote the enhancement of the hobby and the sharing of information on Liverpool memorabilia between collectors. Send to: Keith Stanton, 4 Hillview Gardens, Woolton, Liverpool, L25 7XE  (0151 42 86 087)