As I have mentioned in previous articles, just a few seasons after their formation, Liverpool began to issue a joint match programme with Everton. This seemed to make sense, as when one of the two teams first eleven were at home, their near neighbours reserve side would also be hosting a match. Rather than produce separate programmes, a single issue containing line-ups for both matches would be on sale at the two grounds. This publishing arrangement lasted until the end of the 1934-35 season. After this both sides went their own way and produced programmes for matches at their respective grounds only.

The first such programme issue for Liverpool was for their opening home game of the 1935-36 season, against Manchester City. To mark the new arrangement the club redesigned the cover of the programme and began a new numbering system.  This issue is listed as Vol 1 (new series), No 1, on the cover. 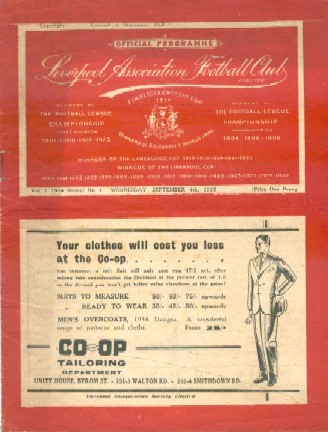 Apart from the attractive new cover, which emphasised the Red of Liverpool, the style of the programme remained very much as it had done in previous seasons. It is a large issue of 16 pages. It is interesting to note that listed in the club’s honours on the cover is winners of the FA Charity Shield in 1906. However, if you glance at page 4 in todays programme you will see that our first Charity Shield victory is listed as 1966. The 1906 victory was in the Sheriff of London’s Charity Shield which, between 1898 and 1907, usually pitched the League Champions against the amateur Corinthians side. In 1908 this match became the FA Charity Shield, and for some reason the Sheriff on London’s matches became ignored. But in 1935 Liverpool obviously saw themselves of having won the equivalent trophy.

As is typical of this period, the line-ups appear in the centre pages surrounded by adverts. Included in Manchester City’s team was Matt Busby, who had just been promoted to the captaincy of their side. He was to join Liverpool in March of this season for £8,000 after a total of 226 first team games for City. Another link between the sides at this time was Man City’s trainer Tommy Chorlton, who had played a total of 121 matches for Liverpool between 1904 and 1911.

One of the attractions of programme collecting is that they provide a superb historical record of the club and the time of the match. A good example of this is the team photograph that occupies a page in this programme. It shows Liverpool’s Directors, Officials and Players for the 1935-36 season. As well as all the usual club chatter this issue also contains a feature on the new Chairman, a Mr W J Harrop.

Liverpool had drawn their opening game of the season, 2-2 away to Chelsea. This first home match saw Manchester City win by two goals to nil. The return game at Maine Road exactly a week later saw City win by six goals to nil. Liverpool struggled throughout the rest of the season, ending just three points above the relegation zone. At the time Man City had yet to register their first League Championship.  They ended the 35-36 season in ninth place, won the league the next season and then were relegated the season after that!

Pre-war programmes are becoming very collectable and as a result their prices have increased quite dramatically over the last few years. Such an issue as this in good condition would fetch around £150 today.

For more information on Liverpool programmes and memorabilia please send 2 x first class stamps for the latest bulletin of the Liverpool Programme Collectors Club.  This contains many articles on past issues and news on current season programmes. The club has been established for over 17 years and exists to promote the enhancement of the hobby and the sharing of information on Liverpool memorabilia between collectors. Write to: Keith Stanton, 4 Hillview Gardens, Woolton, Liverpool, L25 7XE  (0151 42 86 087).