As I have mentioned in a previous article, one of the main joys of programme collecting is that it provides a direct link to the history of the club and those who have been involved with it. One of the all time greats for the Reds (and there have been quite a few) is Kenny Dalglish. He arrived at Anfield in the summer of 1977 for a fee of £440,000. This was a lot of money at the time, but it paid for proven quality as shown by his 47 Scotland caps and over 100 league goals for Celtic.

His first league appearance in Liverpool’s colours was in the opening fixture of the 1977-78 season. His first match for Liverpool was the previous Saturday in the F.A. Charity Shield game against Manchester United. This took place at Ayresome Park on Saturday 20th August. Middlesbrough produced a glossy 20 page programme costing 10p. Rather surprisingly the cover photographs show their local rivals Newcastle United in attacking form against them (note the lack of sponsors on the shirts at this time). 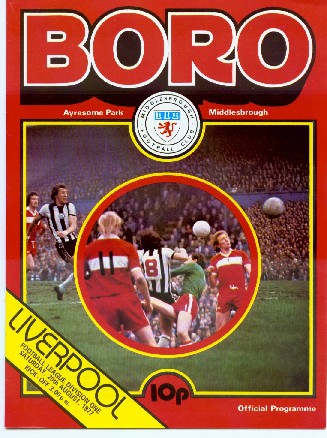 Pages 2 and 3 contain a “Message from the Manager”, John Neal, who was appointed at the end of the previous season. He offers his congratulations to Liverpool, the English and European champions, and mentions how he transferred Joey Jones to them from Wrexham when he was manager there. He recalls that, “Joey came to Wrexham as a young five foot sapling to develop into one of the best full-backs in the country.”

There is comprehensive coverage of the visitors including a team photo, individual pen pictures, a one page article on Bob Paisley and another page looking at the career of David Fairclough. This mentions that it was at Ayresome Park on November 1st 1975 that he made his Liverpool debut, deputising for Steve Heighway in the number 9 shirt and helping in a 1-0 win.

The centre pages have a photograph of the Middlesbrough squad for the 77-78 season, including a very hairy Graeme Souness. Overall for Boro fans it was a poor read with just one short article on their new signing and record buy, John Mahoney to add to the managers notes and adverts.

The back page carries the team line ups, the match officials details and the half time score board (where did they all disappear to?). The match ended 1-1 with Kenny Dalglish getting the goal in the seventh minute.

Liverpool ended the season in second place in the league, but did retain the European Cup thanks to a goal from Kenny Dalglish. An average programme, but an important one in terms of how it relates to one of our greatest players. Its value is around £1 as, like most programmes from the 1970’s and 1980’s, there are still a lot of them about. It goes to show that establishing a collection, and historical record of the club, can be established quite cheaply.

For more information on Liverpool programmes and memorabilia please send 2 x first class stamps for the latest bulletin of the Liverpool Programme Collectors Club.  This contains many articles on past issues and news on current season programmes.  The club has been established for over 17 years and exists to promote the enhancement of the hobby and the sharing of information on Liverpool memorabilia between collectors. Send to: Keith Stanton, 4 Hillview Gardens, Woolton, Liverpool, L25 7XE  (0151 42 86 087).