The 1939-40 Football League programme was only three games old when war was declared on September 3rd and the competition abandoned. Football did continue with the club playing a number of friendly matches until structured league fixtures commenced on a regional basis.

One of these three Football League matches was the opening home fixture of the season played on August 30th against Middlesbrough. The programme issued by the club consists of 20 large pages packed with articles and information. The cover was the same as used for the previous season, made up of a number of 'action' photographs of Liverpool players. This was very unusual for that pre-war period, but showed how innovative the club's programme designers were before war interrupted their progress.

Page three contains "The Managers Message", which looked forward to the coming season. It stated the club's motto as being "clean, clever and attractive football, in the effort to achieve success in the league and cup competitions." It was also stated that Matt Busby was the new club captain and spoke of how the directors were always ready to go into the transfer market when needed. There is also a discussion on the advent of numbering for players shirts for league games with the players of each side wearing 1 to 11.

As well as the cover design the programme producers launched a number of other innovative ideas with this first issue of the season. Page four offered a programme subscription service which would guarantee delivery of the issue "at your breakfast table" before the match. It has not been until recent seasons that such a service has again before available. There are also details of a cup final voucher scheme that would offer a guaranteed ticket to get to Wembley if you could produce 18 copies of the programme from this season. Useful as each cup finalist club would have been allocated just 12,500 tickets each. 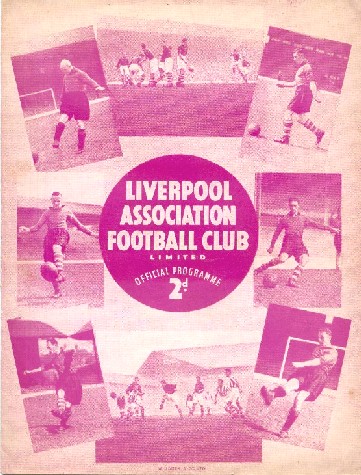 Page five comments on their opening away match at Sheffield United where the side lost 2-1. Page six has "Bee's Sports Notes" which mentions the Jubilee friendly match played against Everton on August 19th. Apparently the temperature that day reached 90 degrees in the shade and ices were sold inside the ground. Page seven focuses on "Anfield's Bright Outlook" for the coming season.

There is a full page team photograph on page nine. The days line-ups appear on the centre pages surrounded by adverts. The rest of the programme consists of first and second team fixture lists, league tables and theatre listings. Pen pictures of the Middlesbrough players appear across pages 15 and 16.

Overall this is a superb programme and record of that three match season. Liverpool won the game 4-1 with Phil Taylor grabbing two goals and John Balmer and Harman Van Den Berg getting the others. The clouds of war were obviously already hanging over the country as just 16,762 watch the game. Liverpool's final game before war called a stop to the national league was against Chelsea at Anfield on September 2nd when they won 1-0.

Not surprisingly the programme from the Middlesbrough match is very rare. The low attendance and war mean that very few have survived the passage of time. Many collectors try and obtain one home programme from each league season. So with just two such 'official' home fixtures in this particular season demand for these issues is high. An approximate price would be around £200.

For more information on Liverpool programmes and memorabilia please send 2 x first class stamps for the latest bulletin of the Liverpool Programme Collectors Club. This contains many articles on past issues and news on current season programmes. The club has been established for over 17 years and exists to promote the enhancement of the hobby and the sharing of information on Liverpool memorabilia between collectors. Write to: Keith Stanton, 4 Hillview Gardens, Woolton, Liverpool, L25 7XE  (0151 42 86 087).