The founding of Liverpool FC is closely linked with two people. The first being John Houlding, the owner of Anfield with whom the dispute over rent with Everton F.C., who occupied the ground, led to Everton leaving for Goodison Park and ‘Liverpool F.C.’ coming into being.

The second is John McKenna. Originally his interest lay in rugby, but in 1885 he began to follow one of the newly formed football clubs, this team being Everton. He was born in County Monaghan in May 1854 and moved to Liverpool as a youngster. After he arrived he worked his way up from a grocers’ errand boy to becoming a prominent local businessman.

Despite taking John Houlding’s side in the dispute with Everton the differences between the two sides were patched up, and McKenna later went on to become President of the Football League, a position that he held for a record 26 years.

McKenna soon became the driving force in promoting Liverpool as a football club.  The story behind Liverpool’s election to the Football League helps back this up. In 1893 Liverpool’s directors seemed content to spend another season in the Lancashire League when McKenna spotted an advert asking for applications to join the expanded Second Division. He sent an application via telegram saying, ‘Liverpool make application to the Second Division of the League.’ As Simon Inglis states in his book, Centenary History of the Football League, because “he had no authority to do this, he signed the telegram in the name of W.E. Barclay, who was then secretary [manager] of Liverpool. Later that night a bemused Barclay called on McKenna and handed him a wired reply which read ‘Liverpool elected. Come to London meeting at 3 o’clock tomorrow to arrange fixtures.’ Presented with this fait accompli the other directors had no choice. McKenna persuaded them to allow him to go to London the following day and, as we know, Liverpool prospered greatly thereafter.”

It was due to McKenna that Liverpool exerted a very strong Scottish influence as he recruited 13 Scottish born players to the first team squad. He was also the person responsible for bringing Tom Watson to Anfield as secretary/manager from 1896 to 1915. Tom Watson was the secretary of Sunderland previously. He led Liverpool to their first championship wins as well as their first Cup Final in 1914. He retained his position at Anfield right up to his death in 1915. His funeral took place on 11th May 1915 with his coffin being carried by a number of Reds players who had served under him.

McKenna was elected to the Management Committee in 1902, became Vice President in 1908, and President of the Football League in 1910. He remained on Liverpool’s board until 1922, and remained League President until his death in 1936, aged 81.

Therefore his influence on not just the development of Liverpool, but also of the Football League, was immense. The historical significance of the man is what helps to make the following programme so unique, it being a tribute issue to one of the clubs founding members. 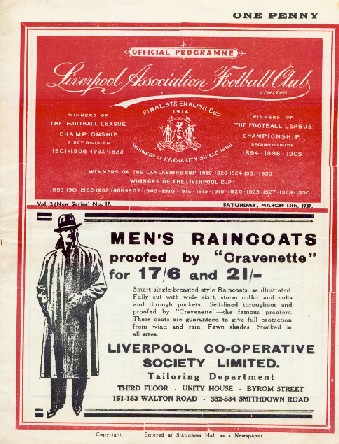 On Saturday 13th March 1937 Liverpool played Preston North End (one of the League’s founding members) at Anfield. The programme issued acts as a tribute to John McKenna and covers the unveiling of a tablet in the entrance hall of Liverpool F.C. on February 27th 1937 by Mr W.C. Cuff (Vice President, the Football League and Chairman of Everton Football Club). He also presented a silver gilt casket containing an illuminated address. John McKenna left this casket and address to the Management Committee of the Football League, but at the suggestion of Mr Cuff, they handed them over to Liverpool F.C.

The programme is printed on thick, high quality, gloss paper to mark the special occasion. Page 2 lists Liverpool’s playing staff, page 3 contains a photograph of the tablet which was unveiled at Anfield. Pages 4, 5, 6 and 7 contain, “ Memorial Tribute to Mr John McKenna. A Great Sportsman and a ‘Football Genius’.” This tribute is a copy of the speech given by Mr Cuff on 27th February. The rest of the programme contains photographs of the casket and address given to the club, Liverpool’s fixtures and results so far that season anda welcome to the visiting side, Preston.

Therefore, with the tribute to John McKenna this is quite a unique issue. However its value increases further when one glances at the team line ups that day, as two legends met on opposite sides. The programme paid tribute to the driving light behind Liverpool F.C. and the Football League, yet little did those watching on the day realise that they were seeing two others who would carry this torch and lead their clubs (and the Football League) to unseen heights.

In Liverpool’s side was Matt Busby, the man who would bring the European Cup to England for the first time. Appearing for Preston was Bill Shankly, need I say more?  The man who rebuilt Liverpool and set the foundations for domestic and European domination during the 60s, 70s and 80s.

The match ended 1-1 with Liverpool’s goal coming from an Alfred Hanson penalty.  The game was watched by Liverpool’s lowest crowd of the season home or away, just 10,000 turning up. Value – at least £200.

For more information on Liverpool programmes and memorabilia please send 2 x first class stamps for the latest bulletin of the Liverpool Programme Collectors Club.  This contains many articles on past issues and news on current season programmes. The club has been established for over 17 years and exists to promote the enhancement of the hobby and the sharing of information on Liverpool memorabilia between collectors. Send to: Keith Stanton, 4 Hillview Gardens, Woolton, Liverpool, L25 7XE  (0151 42 86 087)