Whenever one acquires an old programme it is always a bonus to discover that the issue holds extra historical significance. This is certainly the case for the programme issued for the game between Charlton Athletic and Liverpool played on 5th September 1936. The importance of this programme is that it commemorates Charlton’s first ever home match in Division One.

Charlton were admitted to Division Three South in the 1921-22 season. There they remained until 1929 when they were promoted as champions, winning their division on goal difference from Crystal Palace. They were relegated in 1933, but the next few seasons witnessed a dramatic rise in their fortunes. In 1935 the Division Three South championship was again won, this time by a comfortable margin of eight points. In 1936 promotion to the top division was gained when Charlton finished as runners up to Manchester United.

Charlton’s Division One debut saw them achieve their highest ever league position to date, finishing as runners up to Manchester City by three points. It is interesting to note that in this season they only scored 58 goals in 42 games, only five other sides scored less with three of these being relegated. However, their league position was mainly achieved via a solid defence which conceded just 49 goals. For the match against Liverpool they played the famous Sam Bartram in goal. After making his debut in the 1934-35 season he remained at Charlton until 1956, not only was he their oldest ever league player (being 42 years and 48 days old when he appeared in goal against Arsenal in a Division One game on 10th March 1956) but he ended up making the most appearances for Charlton, 623 in all. One can only wonder what total he would have attained if it were not for the war curtailing his full potential. 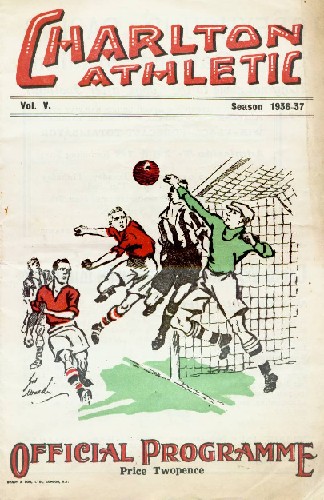 This Division One home debut match saw a 12 page programme issued with black print on white paper. The only colour being the green background to the team line ups on the centre pages together with a very attractive cover which had the Charlton players in red shirts, the club name in red and appropriately the goalkeeper was highlighted in a green top.

Page 3 had the programme being numbered 2 of volume V. However Charlton reserves had already played twice at The Valley, so perhaps issue number one was for a pre-season practice game. Pages 3 and 5 contained ‘Club Notes’ by Charltonian. It was stated that the manager Jimmy Seed (who held the reigns from 1933 to 1956) was going to give the players who had got Charlton to the top division a chance before steps were taken to strengthen the side if it was needed. These club notes also contained brief write ups of Charlton’s previous two games, away at Grimsby and Stoke. It also contained a welcome to Liverpool and a note that this was their first Division One game and they expected a good crowd for it (between forty and fifty thousand).  Records show that 31,000 turned up. The club notes were the only article in the programme, the rest being made up of adverts, league tables, fixtures and directions to the ground via bus, train, tram and trolleybus.

Although the war obviously curtailed Charlton’s rising potential events immediately after it showed that they had built a good side. In 1946 they reached the FA Cup Final, only to lose 4-1 to Derby County in extra time. This was an unusual match for two reasons, firstly both goals in normal time were scored by Turner (an own goal, then sixty seconds later an equaliser for Charlton). Secondly the ball burst. The odds on both these events happening seem quite remote.  However in 1947 Charlton reached Wembley again, this time winning 1-0 against Burnley. Again extra time was needed and again the ball burst!

For more information on Liverpool programmes and memorabilia please send 2 x first class stamps for the latest bulletin of the Liverpool Programme Collectors Club.  This contains many articles on past issues and news on current season programmes.  The club has been established for over 17 years and exists to promote the enhancement of the hobby and the sharing of information on Liverpool memorabilia between collectors.