On October 4th 1930 Liverpool travelled to St James Park to play Newcastle United in a Division One fixture. Just a month before had seen the record attendance created for this ground when 68,386 paid to see Chelsea take on the Magpies.  This record still stands to this day. However, for the visit of Liverpool just over four weeks later only 28,000 passed through the turnstiles, an amazing 40,000 less!!  Also in this 1930-31 season, Newcastle’s lowest attendance was 10,000 for a league game against Bolton Wanderers. Perhaps these wide variations in crowd numbers might help explain why Newcastle United pre-war programme issues are very rarely seen, as the club probably only had low print runs so not to be left with thousands of unsold issues.

For Liverpool’s visit the programme produced has a stunning multi-coloured cover.  The front shows a drawing of a game in progress at St James Park together with an advert for the Evening Chronicle, designed around the club’s Magpies nickname.  The back cover has an advert for ‘Newcastle Ales’, again in a beautiful colour design. Both inside covers contain similar colourful adverts, one for ‘Lockhart’s Cafes’, the other for ‘Vitreosil heat proof gas globes.’ 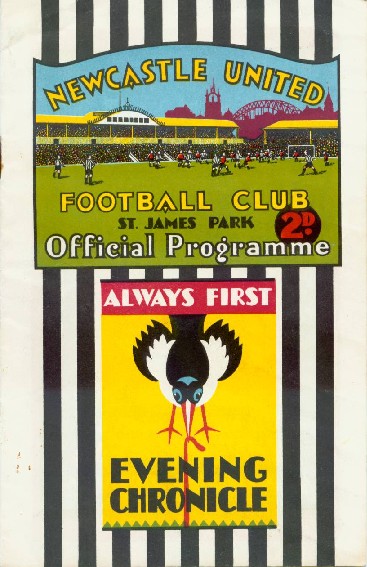 Pages 3, 4 and 5 contain the ‘Editorial’, which commented on Newcastle’s recent matches, and mentions Liverpool’s previous game when they beat Chelsea 3-1 at Anfield with Hodgson getting a hat-trick. Also mentioned is that James Jackson would not be playing for Liverpool that day as “he is now a full-fledged Reverend and we saw it stated the other day that he is due to go to Cambridge for a twelve months course of study.” James Jackson was born in Newcastle and his father played 58 times for the Magpies between 1897 and 1898. Liverpool was James Jackson’s only league team in England, having joined the Reds from Aberdeen in 1923. He made his league debut on 14th November 1925 and played a total of 224 matches for Liverpool, scoring two goals. His brother also played league football, appearing in the colours of Sunderland and Tranmere Rovers.  His cousin played test cricket for Australia.

Page 6 has the ‘Broadcast Programme’ for the afternoon. Page 7 lists the evening's entertainment at Newcastle’s theatres. Pages 8 and 9 have the half time scoreboards surrounded by adverts. The centre pages contain the team line-ups, again with adverts around them. Pages 12 and 13 list Newcastle’s first and reserve team fixtures and results. Page 15 has a list of the players for both Liverpool and Middlesbrough (whom Newcastle were playing away the following week). Page 16 lists the days other fixtures and had predictions over what the results would be.  Page 17 has the league tables and adverts. Page 18 has a cartoon.

Overall a very good programme that cost 2d on the day. At the end of the 1933-34 season Newcastle were relegated to Division Two. Perhaps with the change in fortunes and the recession of the time might explain why the stunning coloured covers were only used by Newcastle for a couple of seasons.

For the record Liverpool won the 1930-31 league game 4-0 with two goals coming from James Smith and Hodgson and Edmed grabbing the others. James Smith scored 38 times in just 62 matches for the Reds. He also holds the British seasonal goalscoring record with 66 when Ayr won the Scottish Division Two championship in 1927-28. He later emigrated to the United States after his playing career ended.

As mentioned Newcastle’s pre-war programmes are very thin on the ground, and such a stunning issue as this is highly sought after. Value would be around the £200 mark.

For more information on Liverpool programmes and memorabilia please send 2 x first class stamps for the latest bulletin of the Liverpool Programme Collectors Club.  This contains many articles on past issues and news on current season programmes.  The club has been established for over 17 years and exists to promote the enhancement of the hobby and the sharing of information on Liverpool memorabilia between collectors. Write to: Keith Stanton, 4 Hillview Gardens, Woolton, Liverpool, L25 7XE  (0151 42 86 087).