On the 13th January 1934 Liverpool played an F.A. Cup third round match against Fulham at Anfield. For this game the typical joint Liverpool and Everton programme was issued. Season 33-34 saw the 59th competition for the F.A. Cup. Everton were then holders and Liverpool were yet to claim the trophy. Fulham were a Second Division club at the time and had met Liverpool twice in the cup, winning both times (3-1 in the 25-26 season and 3-0 in the 11-12 season, both games being played at Craven Cottage). 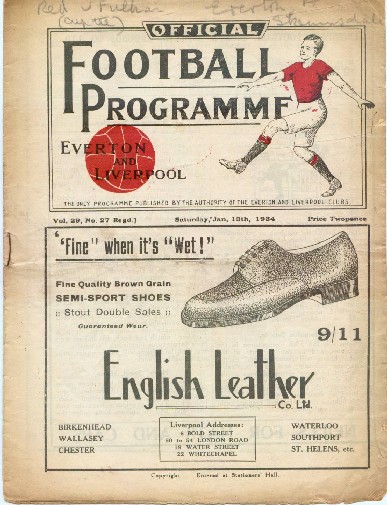 A 16 page programme was produced, the only colour being the player’s red shirt and ball on the cover. Pages 2 and 3 contain the Editor’s note book. As well as commenting on Liverpool’s home draw in the cup it also considered Everton’s chances at White Hart Lane where they faced their first stage in the defence of the trophy. Pages 3 and 4 list the fixtures, results and goal scorers of both Everton and Liverpool for the season.

Page 6 welcomes the visitors and gave a brief history of them. Page 7 contains “Breezy Briefs” which focused on Fulham’s players, one of which (Hammond) was also a County cricket player for Sussex. The line-ups appeared over the centre pages surrounded by adverts. The programme, reflecting it’s joint status, also carried the line-ups for the days game at Goodison Park between Everton and Skelmersdale.

Pages 10 and 11 contain the clubs respective reserve fixtures and results, together with news from both sides recent results. The rest of the issue is filled with adverts, statistics and the F.A. Cup third round scoreboard.

The game ended in a 1-1 draw watched by 45,619 spectators. Liverpool’s goal came from Gordon Hodgson in the 22nd minute. Fulham’s equaliser came from John Lambert. He had arrived at Fulham in October 1933, costing £2,500 from Arsenal. This was a lot of money then, but he had proved himself at Highbury (where he cost £2,000 from Doncaster Rovers) by scoring 264 goals in 341 games in all competitions. He gained two League Championship medals and one FA Cup winners medal whilst with Arsenal.

The replay showed that Fulham were a tough nut to crack, the game was played on Wednesday 17th January and went into extra time due to a Bradshaw equaliser for Liverpool in the 88th minute. A goal by Roberts won the game for the Reds 3-2. Sydney Roberts spent 8 years at Anfield, playing 57 games and getting 10 goals.

Bryan Pead’s excellent book, “Ee-aye-addio we’ve won the cup!” stated that for the replay the London and Midland Railway was running a 16 shilling excursion to London for the game. It left Lime Street at 11-50pm on the Tuesday night.

Liverpool’s first visit to Craven Cottage was in the 1911-12 season. In a second round game, on 3rd February 1912, Liverpool went out of the cup suffering a 3-0 defeat. Fulham issued a large 20 page programme, with just 6 pages being taken up by adverts. It consists usual club notes, a cartoon, line-ups and an article in the middle pages on “Dash v Science”, which goes into arguments for and against each type of play. The programme has a very striking pink cover.

There is a further Liverpool cup link in that in 1908, when Fulham reached the semi-final, they plated Newcastle United at Anfield, which they lost 6-0.

For more information on Liverpool programmes and memorabilia please send 2 x first class stamps for the latest bulletin of the Liverpool Programme Collectors Club.  This contains many articles on past issues and news on current season programmes. The club has been established for over 17 years and exists to promote the enhancement of the hobby and the sharing of information on Liverpool memorabilia between collectors. Send to: Keith Stanton, 4 Hillview Gardens, Woolton, Liverpool, L25 7XE  (0151 42 86 087)