Dr Robin Gowers has been collecting Liverpool Football Club programmes and memorabilia for over twenty years. He has written numerous articles relating to these for a number of publications including the official club magazine and match programme. He was responsible for a feature in last season's match programme that reviewed a 'valuable' programme in each issue.

Interest in the clubs great history has surged in the last few years. This has coincided with the opening of Liverpool's museum. Having the match programme provides a direct link to the club's past and helps bring alive many memories of both the good times and the bad.

Despite Liverpool's early success in the league, winning their first championship in 1901 just under 9 years after being formed, FA Cup success was harder to come by. The semi-final stage was first reached in 1896-97 when Aston Villa prevented them reaching the final by winning 3-0 at Bramall Lane. Two seasons later saw the Reds lose out at the same stage again when Sheffield United beat them 1-0. This was a very close yet so far season as they also lost out on becoming league champions on the final day of the season. They had to beat Aston Villa, yet lost 5-0 and Villa lifted the championship trophy instead. Season 1905-06 again saw them lose in the semi-final, this time to neighbours Everton. However, they did at least become Champions for the second time that year. 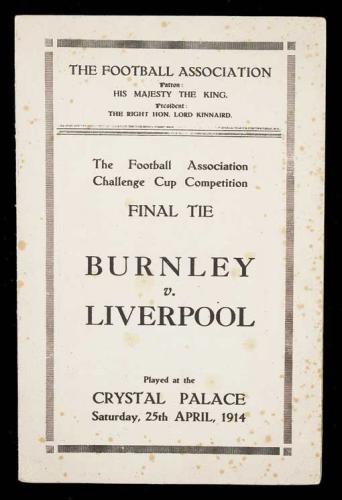 At their fourth time of trying, in 1914, they at last won an FA Cup semi-final, beating Aston Villa 2-0 at White Hart Lane. Their reward was a place in the Final against Burnley. It was the last of the 20 finals to be played at the Crystal Palace and it was also the first time that a reigning monarch had attended the showpiece match of the English football season. George V attended the game in his role as patron of the Football Association. The game was played on 25th April with 72,778 people in attendance. Burnley ended up receiving the trophy from the King by winning 1-0. This was the first and only time that they have lifted the FA Cup. They were also the first side to have won it by beating top division clubs all the way to the final. The match programme from the game is very sought after, not only by collectors of the two clubs involved, but also by big match collectors. Any pre-first world war programme is rare and therefore quite valuable. This is more the case with those from FA Cup finals. The programme consists of just four pages with black print on white paper. The front page has the match details. The inside cover lists the programme of music that was to be played by The Band of His Majesty's Irish Guards and The Band of 1st Battalion King's (Liverpool) Regiment. This included Carmen, Land of Hope and Glory and When the Midnight Choo-Choo, among others.

Page 3 listed the results of all the previous Finals and where they had been staged. The back page listed the team line ups and colours. Liverpool played in scarlet jerseys and white knickerbockers. The officials are also listed as well as a note reminding spectators to keep their places if the match resulted in a draw after 90 minutes as extra time would have been played. So, overall a basic programme with just the essential information for the match and nothing in terms of reading material. This is quite a surprise as most other programme issues of that period are fairly substantial items with many articles and news features. Even so, this four page issue sold at auction recently for £4,560.

The club has been established for over 17 years and exists to promote the enhancement of the hobby and the sharing of information on Liverpool memorabilia between collectors.