Rome 1977 will always be associated with Liverpool Football Club. Liverpool retained their title of Champions of England in the 1976-77 season, however they missed out on the double with defeat in the FA Cup Final. But just four days later they contested for the ultimate title – Champions of Europe.

To reach the final in Rome, Liverpool had defeated Crusaders, Trabzonspor, St Etienne and FC Zurich. The match against Borussia Moenchengladbach took place in the Olympic Stadium on Wednesday 25th May 1977. A journey that had began just 13 years before with a trip to Iceland reached it’s ultimate conclusion as Liverpool lifted the trophy with a deserved 3-1 victory. Goals came from McDermott, Smith and Neal.

With regards the match programme from this historic game there is quite a debate as to what issue can be regarded as the most ‘genuine’ or ‘official’. The issue that is seen as being the programme looks very genuine form the front cover. It contains the match details together with the title, "souvenir programma". It consists of 16 pages and is written mainly in Italian and English. Pages 2 and 3 have a welcome in three languages together with a list of the results of previous finals. Both of the competing teams are covered, with pen pictures and photographs. The center pages have photographs of two "European Super Stars", Kevin Keegan and Bertie Vogts (whatever happened to them?). The back page lists the line-ups. 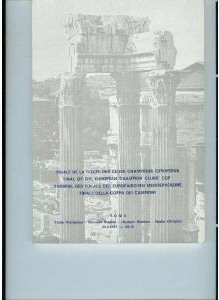 So, altogether it appears to be a traditional match programme. The problem is that it was produced in Manchester and was apparently not available in Rome. For a programme to be seen as an official issue it has to be printed by either the club or stadium and be available to all the spectators on the day of the match. As a result it can be questioned if this issue can be seen as a legitimate programme. Even so, whereas this ‘programme’ could easily be bought for around £1 ten years ago it now fetches over £15 when it appears on internet auction sites.

From a Liverpool programme collectors viewpoint it is generally agreed that two other issues are more legitimate in terms of issues for this game. The first is the very large four page Telesport ‘programme’. This was available in Rome on the day of the match and lists the line-ups on the cover. Given it’s size and limited attraction to the visiting fans (being written in Italian) means that very few made their way back here. This means that it is on many Liverpool collectors wants lists and if one came up on offer today it would probably fetch a four figure sum. There is also an official UEFA issue. This is more a booklet as it consists of 128 pages. This was only available to the press and VIPs. As it was not available to the general public one can debate as to whether it could be seen as a match programme. Even so, it is very rare as the print run must have been low. My records show that the last two times it came up at auction it fetched £600 and £420.

For more information on Liverpool programmes and memorabilia please send 2 x first class stamps for the latest bulletin of the Liverpool Programme Collectors Club. This contains many articles on past issues and news on current season programmes. Send to: Keith Stanton, 4 Hillview Gardens, Woolton, Liverpool, L25 7XE (0151 42 86 087)The club has been established for over 17 years and exists to promote the enhancement of the hobby and the sharing of information on Liverpool memorabilia between collectors.