Unique programmes: On tour in Europe

The Penny Black of Post-War Programmes? The area of programme collecting that has seen the greatest increase in interest is the European away issue. It has only really been in recent seasons that more fans have made these away trips thanks to more open access to travel and more routes on offer. Having said this the club did regularly advertise excursions to away matches in the early 1970s, with the supporters sometimes travelling on the same plane as the team.

Also, with the advent of the internet, access to the programmes, tickets, press packs, etc. from the away European matches has become much more easier in the past couple of years. As demand for the older items has increased, so have their prices. Many of the rarer European away issues can fetch hundreds of pounds. Perhaps the hardest one of them all to get is the legendary issue from the Trabzonspor match in the Reds first successful European Cup campaign season of 1976-77. 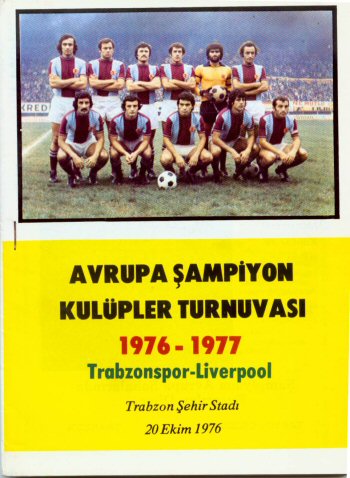 Liverpool were drawn against the Turkish champions in the second round of the competition having beaten Crusaders 7-0 on aggregate. The first leg was played on October 20th 1976. Various stories exist surrounding the build up and travel arrangements to the game, as well as the match itself. Rumour has it that just one Liverpool fan managed to make their way over there due to the severe travel restrictions of the time.

The programme itself is a substantial issue of 76 pages. The outer cover is printed on glossy paper while the inside contents are all printed in black onto fairly poor quality paper. Although the majority of the content is advertising, there is still a good range of articles which describe their players, management and officials. The only English in the whole programme is a poorly translated welcome which states that in the 75-76 season Trabzonspor became the first Anatolian team to become champions of Turkey. That is, they were the first side from outside Istanbul to win the Turkish league.

Overall an impressive issue and one that is certainly more substantial than the vast majority of other European away issues (compared to even those of today). Apparently only six copies of this programme are known to exist. Because of this scarcity it is the programme most seen on Liverpool collectors wants list. As for a price it is very hard to say, but if one came up for sale today it would not surprise me if it fetched a four figure sum. The museum has an original copy on display with other items from this historic season.

Despite it being their first ever season of European football, Trabzonspor won the game 1-0 in front of 25,000 of their fans (or 24,999 if the rumour is correct!). Reports state that the pitch was poor, the referee bad and the ball tatty (Bob Paisley apparently likened it to a pigs bladder). Revenge was gained two weeks later with a 3-0 win to set up a quarter final tie with St Etienne.

For more information on Liverpool programmes and memorabilia please send 2 x first class stamps for the latest bulletin of the Liverpool Programme Collectors Club. This contains many articles on past issues and news on current season programmes. Send to: Keith Stanton, 4 Hillview Gardens, Woolton, Liverpool, L25 7XE (0151 42 86 087). The club has been established for over 17 years and exists to promote the enhancement of the hobby and the sharing of information on Liverpool memorabilia between collectors.