Liverpool hold a prominent place in Chelsea's history, being the first team to play them in a match at Stamford Bridge. Chelsea's origins can be traced back to a small West London hotel in late 1904 where H. R. Mears, who had acquired the Stamford Bridge Athletic Grounds, ad the idea of forming a first-class football club to go with the athletics meetings that took place there.

When Mears made his feelings public he found very little support. The ground, close to the city centre, was an already established sporting venue. The terraces were constructed using soil from the Underground Railway and covered accommodation for 5,000 was constructed. The stadium was there, but what was missing was a team. To overcome this problem John Tait Robinson was employed, and he spent £500 in producing the team to go with the ground.

Robinson's most famous signing was Billy 'Fatty' Foulke who cost £50 from Sheffield United in May 1905. Billy Foulke holds a unique place in football folklore, being successful in winning two FA Cup winners medals in 1899 and 1902, a runners up medal in 1901 and he played once for England. He remained at Chelsea for just one season before moving to Bradford City in April 1907. He retired in November 1907 and passed away on 1st May 1916 after contracting pneumonia on Blackpool Sands where he was earning a living by inviting members of the public to score goals against him. He also represented Derbyshire at cricket (Information from, Chelsea: A Complete Record 1905-1991. By Scott Cheshire). 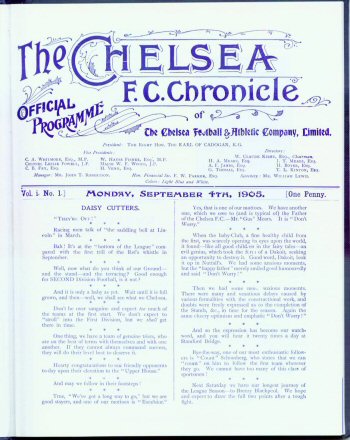 Chelsea first applied to join the Southern League, yet were turned down. Next, entry to Division Two of the football League was sought where, to everyone's surprise, they got in. Their first ever match was away to Stockport County on 2nd September 1905, where they lost 1-0. Their first ever match at Stamford Bridge was in a friendly played on Monday 4th September when Liverpool were the visitors. Chelsea produced a four page programme to commemorate this event. The front cover obviously focuses on the birth of Chelsea Football Club. The style of writing used remained in Chelsea's programmes right up to the Second World War, with the use of plays on words and snappy short paragraphs.

The second page contains a pen picture of that days referee, a Mr John Lewis whom Chelsea claimed, "In the whole history of Football there has been no more efficient, popular or respected referee." John Lewis was one of the founders of Blackburn Rovers for whom he played for 25 years previously. He refereed three Cup Finals and retired from officiating in March 1905, but was persuaded to return and officiate Chelsea's opening home game. The second page also contains season ticket price details, the best seats being £1's. Also listed were forthcoming fixtures at Stamford Bridge, both football and athletics, as well as an appeal for advertisers to use Chelsea's programme. The linesmen were also prominent members of the Football League being the president and future president respectively.

Page three contains a photograph and profile of William Foulke, Chelsea's new captain. It tells that he stood at 6ft 3in tall and weighed 22 stone, and in their words he, as fine a specimen of manhood as ever stepped onto the field. In spite of his bulk he possesses all the agility of a cat, combined with the playfulness of a kitten.

The line-ups appeared on the back page. Chelsea ran out 4-0 winners. Liverpool had played in the capital two days previously against Arsenal, losing 3-1. Their next game was at home to Blackburn, which they lost 3-1. This was followed by a 5-0 away defeat by Aston Villa. Not a great start to the season. Yet Liverpool finished the campaign as Football League Champions and were close to the double, losing in the FA Cup semi-finals to Everton.

This programme sold earlier this year at auction for £3,300. A good price for such a historic issue.

For more information on Liverpool programmes and memorabilia please send 2 x first class stamps for the latest bulletin of the Liverpool Programme Collectors Club. This contains many articles on past issues and news on current season programmes. Send to: Keith Stanton, 4 Hillview Gardens, Woolton, Liverpool, L25 7XE (0151 42 86 087)The club has been established for over 17 years and exists to promote the enhancement of the hobby and the sharing of information on Liverpool memorabilia between collectors.