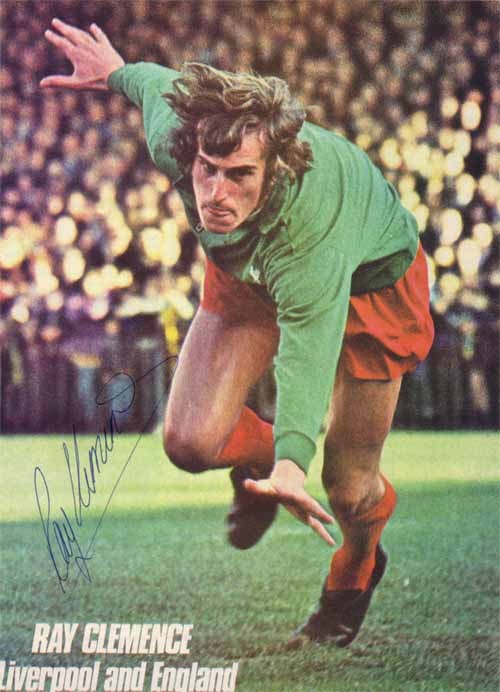 Ray Clemence was an experienced goalkeeper for his age when Liverpool bid for him: "I had six or seven games one season with 2nd division Notts County as a schoolboy, but they threw me out because they thought I wasn’t good enough. In football, you need to be in right place at the right time. I had 46 appearances for Scunthorpe. I was a 17-year-old in my first year at Scunthorpe. The following season I missed the first two first team games and then played the rest of the first team games at 18 years of age. At the end of that season I moved to Liverpool.

When I signed for Liverpool Shanks told me Tommy Lawrence was over the hill and past his best and if I continued to improve I’d be in the “Big team” as he used to call it, within six months. When I got to Liverpool for pre-season after signing for them I found out that Tommy wasn’t over the hill and past his best. He was at the peak of his career and I had to wait 2½ years before getting a regular first team place.

My Liverpool debut was against Swansea City at home in the League Cup. We won it 2-0. It was a horrible night, lashing down with rain and a gale-force wind. I had a particularily poor night when kicking the ball was concerned. I remember one soul shouting out from the Anfield Road end, knowing my kicking would put Swansea on the attack every time I had the ball: 'Clemence, take an early shower.' Obviously he didn't realise what was to come in the next 14 years.

Shankly remarked at the time: "He’s a nicely-built lad, with one or two mannerisms, and maybe a wee bit cocky. But we’re getting him in plenty of time to work on him."

Clemence became one of the best goalkeepers in Liverpool's history and deserves to be mentioned in the same breath as Sam Hardy, Elisha Scott and Tommy Lawrence. The interesting thing is that Clemence didn't want to become a goalkeeper: "I couldn’t play anywhere else. I never wanted to be a goalkeeper. I never really played in goal until I was 15 years of age. I started off at 9 years of age as a centre forward. In my early teenage years I played centre-half and left back. I enjoyed both those positions, probably left back better than centre-half. And just by chance one day we were short of a goalkeeper and the sportsmaster at school nominated me to go into goal. When I went into goal it was just natural for me to do. I still didn’t really want to be a goalkeeper."